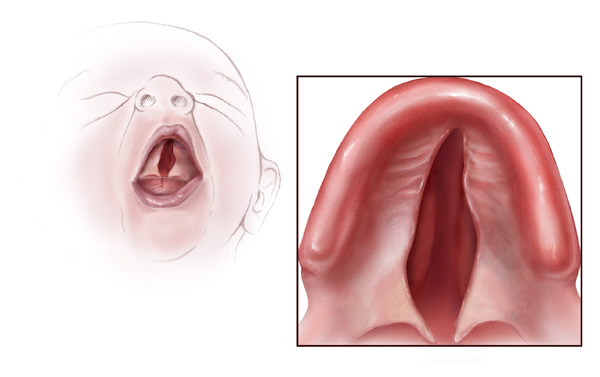 This syndrome is a congenital/present from birth disorder that is associated with problems in eye and ear structure and spinal growth. In babies with this syndrome, the bones in the face don't develop during fetal development and growth. The syndrome affects one side of the face or both, with one side more affected than the other.

This disorder is also known Oculo-Auriculo-Vertebral/OAV syndrome. This disorder was first identified by Dr. Goldenhar in the 1950s and is consequently named after him. Goldenhar syndrome is an uncommon birth defect associated with head abnormalities and malformations in the spinal column of the body.

Each of these abnormalities can be observed bilaterally or only one side of the brain. The facial abnormalities are associated with eye, lip, cheekbones, jawbones, nasal region and soft palate. The ear, eye, nose and other organs may be partly formed or completely missing in those suffering from this syndrome. The disorder is also linked with under-developed muscles and skin on the face. This is termed as hypoplasia. Macpostoma is another abnormality observed in those with this syndrome. It has a large corner of the mouth that extends towards the ear on either one side, chin malformations and an undeveloped eye. A deformed mouth opening can aggravate speech difficulties and the spinal vertebrae on one side may be small or incompletely formed/hemivertebrae.

The disorder is also linked with under-developed muscles and skin on the face. This is termed as hypoplasia. Macpostoma is another abnormality observed in those with this syndrome. It has a large corner of the mouth that extends towards the ear on either one side, chin malformations and an undeveloped eye. A deformed mouth opening can aggravate speech difficulties and the spinal vertebrae on one side may be small or incompletely formed/hemivertebrae.

The Goldenhar syndrome is a problem present from birth and is associated with deformities of the head and spinal cord, which differ in terms of their intensity. The precise etiology of Goldenhar syndrome is unknown till now, and the precise mechanisms of causation are being researched. The symptoms of this syndrome are different depending upon the patient in question. Characteristics of the condition include:

In most of the cases, one side of the face is affected while some also experience the syndrome on both sides. Specifically, affected people may experience hearing loss, heart, kidney and lung issues, hydrocephalus (accompanied with or without intellectual disability). Spinal abnormalities or limb malformations are other features of this syndrome.

The specific cause of Goldenhar syndrome is not completely known. It occurs during the development of the baby in the fetal stage and may result from a chromosome deformity. A disruption in the flow of blood and nutrients to the brain may also follow. Sometimes, genetic problems may be passed from the parents to the children.

Symptoms of the Syndrome

While the symptoms of the syndrome vary from one individual case to other,they usually take place on a single side of the human body and the face. The most prominent signs are facial abnormalities called hemifacial microsomia including:

Other features of the disorder include deformities in the eyes, ears, and spine such as:

The organs which may be undeveloped include the heart, lungs, and kidneys. The defects in the latter lead to respiratory difficulties, malformation in the ribs and brain deformities are linked with intellectual disability.

The deformities associated with the syndrome are centered on the head and spine. Around 30 percent of those with the syndrome suffer from bilateral facial malformations, and some parts of the right side of the face may be more severely impacted.

Symptoms of the syndrome can differ as some people suffer from the syndrome with serious abnormalities while others suffer few congenital defects.

Birth defects of the eye are also seen in those with this syndrome. Cysts in the eyeball or epibulbar are observed with microphthalmia( the latter is a condition characterized by small eyes). Many patients with this disorder also have coloboma or the missing tissue from the upper eyelid. Orbital strabismus or crossing of the eyes is also commonly found.

In patients with this syndrome, ears may appear smaller than normal/microtia or be missing/anotia. Ear tags or more pieces of flesh may be found on the cheek, aligned with the ears and spread to the corners of the mouth. There may also be abnormalities in the shape of the hearing organs. People suffering from Goldenhar syndrome are also likely to suffer hearing loss.

Spinal deformities linked with Goldenhar syndrome can result from underdeveloped spine which may be missing, incompletely formed or molded. Ribs have also undergone deformity as a result of this. About half of the cases with this disorder have scoliosis/ spinal curvature.

Mental retardation or delays in mental development occur in close to 15 percent of the cases. If the person has microphthalmia, then MR's probability rises. Heart, as well as kidney pathologies, are also noted in this disorder.

Children with not so severe symptoms do not require intensive treatment. Others may require numerous medical treatments through early stages of childhood to ensure the proper development and growth of the jaw and facial bones.

This may be carried out for reshaping facial bones and the jaw. It is also carried out to correct neck and spinal cord abnormalities and reconstruct the ears as well as check vision problems.

Orthodontic treatment can be used to correct dental issues. Hearing aids or cochlear implants are also in place for improving hearing. Speech and linguistic development problems may require therapeutic intervention and treatment for vision deficiencies include glasses or surgical interventions.

The treatment of the syndrome is based on signs and symptoms. Affected children may be managed by a multidisciplinary craniofacial team and treatment is dependent on age as well as linked stages of growth and development.

Referral to concerned medical specialists may be required so that care can be offered. Hearing loss may require audio aids. Epibulbar tumors are benign growths in the eyes and can be surgically removed if large or causing problems with seeing.

Craniofacial abnormalities such as heart and kidney defects and spine abnormalities may also require surgery and medical interventions. Speech evaluator or therapist may be required for treatment.

The prognosis is ideal for those with Goldenhaar syndrome if they get the medical treatment they require. While genetic screenings cannot identify the presence of this syndrome, it is characterized by facial malformations and the diagnosis can be made on the basis of a medical exam. Speech therapy and dental treatment, as well as treatment for heart, lung, and kidney problems, ensure people live a normal life.