Tobacco contains nicotine, which was named after a plant called Nicotania tabacum, which was named after a French guy Nicot de Villemain. During 16th century, he planted the plant in Paris and promoted it. This alkaloid is almost 3% of tobacco’s dry weight and it mostly contains leaves and roots. But smaller amount of it found in other plants like potatoes, tomatoes, eggplants, leaves of coca plants and green peppers.

Did you know that in the late 17th century, nicotine was used as pesticides? Yes, it is true! The antihervivore effect of nicotine can be very lethal, especially to insects. Likewise, Nicotine sulfate was also considered to be the most potent botanical insecticide that was available for home gardeners as it was very harmful to humans and was quickly absorbed through the skin. That is why, in 2008, the United States of Environmental Protection Agency (EPA) banned the use of nicotine-based pesticides.

In higher doses, between 30 to 60 mg, nicotine can be very lethal to humans and deterrent to insects, making it neurotoxic chemical. However, in smaller doses, 1mg or smaller present in cigarette, it acts as a stimulant.

Nicotine mostly affects your nervous system and helps reduce your appetite, relieves depression, boosts mood, improves memory and cognition, and enhances train activity. However, it also increases salivation, stimulates intestinal motility, increases both the blood pressure and heart rate, and may even cause vomiting and nausea.

Although it takes only 1mg of nicotine in one cigarette to stimulate your brain, however, this single stick would be sufficient enough to cause you addiction to it too. Your brain is responsible in creating neurotransmitters, which thus creates emotions and sensations you feel within you. But when you inhale nicotine, it masks those neurotransmitters, thus deceiving neurons and replacing the substance called acetylcholine on its receptors. The nicotine then goes on to produce an abnormal amount of dopamine, causing euphoria. After smoking, the euphoria ceases because the nicotine effect has gone.

Thus, when this feel-good sensation is gone, you might be attempted to have that feeling again. That is why, most people need another cigarette to revive that euphoria. This cycle continues, and then eventually, the addiction increases.

Sometimes, smokers may also want to quit smoking, and while doing so, they may experience mild to chronic withdrawal symptoms such as anxiety, intense craving for nicotine, depression, trouble sleeping, drowsiness, headaches, frustration, inability to concentrate, and weight loss. These symptoms will be at its highest for at least 2-3 days after you’ve stopped smoking.

The withdrawal symptoms may be even more frequent among people who used to smoke more sticks per day or who had longer years or smoking. But nicotine addicts are trying to avoid these same symptoms, and thus, they prolong their recovery and addiction to nicotine. 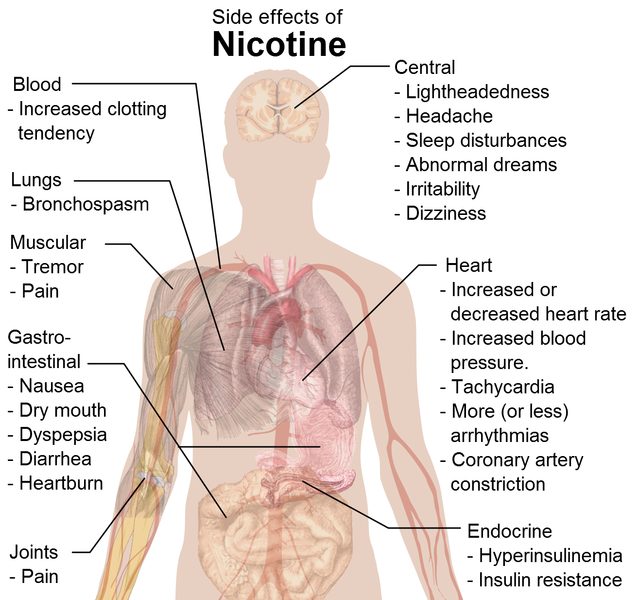 There are number of diagnostics available today to detect nicotine in your body. When you inhale smoke, nicotine is metabolized into cotinine in vital organs such as the liver and lungs, which then is eventually expelled through the urine. Apart from nicotine, cotinine is a good indicator for nicotine use, detectable in saliva, urine, and the blood.

It depends on the number of tobacco you smoke every day, and the number of years you’ve smoked till today, and also the type of nicotine test done. In short, it may be 2 days, or it may stay as long as 3 months.

To detect nicotine use, both quantitative and qualitative blood tests can be used. The presence, or the absence, or the blood nicotine levels can be figured out. Nicotine, along with other substances such as anabsine and cotinine, can be used to conduct these blood tests. These tests can reveal even the smallest traces of nicotine present in the bloodstream.

When you inhale nicotine, it is metabolized into cotinine, which will again mixes with the blood. This is when liver detoxification begins, which helps in removing toxins from the blood. However, this removal process is often slow in comparison to the process of waste removal by the kidney in form of urine, which then usually takes place in a much quicker pace. In these blood tests, you will still see the presence of nicotine up to 1-3 days after you’ve stopped using nicotine-containing products like cigarettes, nicotine patches, smokeless tobacco, or gum.

Other factors also play a huge role — the amount of nicotine use, the age and health of an individual, etc. If the continine levels are used to detect the presence of nicotine in your bloodstream, it could take 1-10 days until the levels will no longer be detectable in the blood. Sometimes, number of reasons may also lead to false positive results. For example, if you’re working at a metal refining areas, you may consume high level of thiocyanate, or if you eat thiocyanate containing foods such as broccoli, cabbage, mustards and almonds, or if you take medicines such as amphetamines. You should also consider laboratory errors.

Although nicotine is highly addictive and withdrawal may seem hard to achieve at first, quitting smoking is possible. Here are few methods with which you can clear nicotine from your body, and during the process, minimize or even avoid withdrawal syndrome efficiently.

We discussed how tobacco stays in your system and also outline some facts, effects, uses, test, and withdrawal methods. If you’re visiting EU countries from other countries, and need to check the presence of nicotine in your body, you can use EHIC card. This is an European Health Insurance Card, is a free of charge card that allows you to receive medical treatment in reduced cost or for free if you are insured or covered by a social security scheme of the EEA countries.