Kawasaki Disease is mainly developed in kids under the age of five and especially in the summer and spring season. If not diagnosed in the early stage it can cause serious heart problems in children. Causes of Kawasaki Disease is still not very clear but yet many assumptions are made by specialists as its possible reasons to occur.

KD is also known as Mucocutaneous Lymph Node Syndrome as because it affects the skin, lymph nodes & mucous membranes inside the mouth, throat, and nose.

Generally affected children get completely relieved after proper treatment. Only three percent of cases came in front where reoccurrence of Kawasaki Disease is diagnosed even after the complete treatment. But these kinds of cases are very rare.

There are so many assumptions regarding the causes of Kawasaki Disease but none of them are fully proved as of date. But it is been cleared that it is not a contagious disease. Some of the important thesis for Kawasaki Disease reasons is pointed below:

There is a conflict regarding the exact cause of Kawasaki Disease but as per some researches reports it caused by some of the infected bacteria whereas some other reports say it caused by an infected virus destroying good tissues in the body of children.

Symptoms of Kawasaki Disease or KD:

The Kawasaki Disease causes inflammation in body especially in heart arteries of children under 5 years old. Its symptoms get developed in the different phases. Basically, more than five days of illness is considered as the first sign of KD.

During different phases of KD changes in health condition are observed which helps in determining the diagnosis and treatment procedure for the affected kids. If not treated in its initial phases then it can cause severe heart problems like heart failure etc.

Here we will elaborately discuss the different phases of Kawasaki Disease symptoms which will help you to understand it clearly and its development procedure.

Once you see these symptoms in your child, don’t make any further delay otherwise in the lack of treatment the arteries of the heart of your child get damaged due to clotting or blockage in it, as blood flow is obstructed. 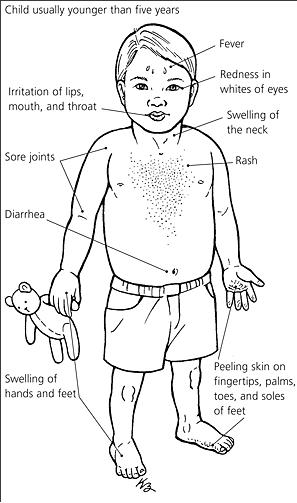 Once after diagnosis, the Kawasaki Disease found in a child immediate treatment should be provided in order to prevent further health hazard in the form of heart damage. If you find symptoms of KD in your child your first step should be to go for complete diagnosis as per the doctor.

AS of date, there is not any fixed test for KD but on the basis of similarities to its few symptoms, the doctor recommends for different lab tests. They initially look for following symptoms to be matched before recommending for complete diagnoses.

If all these symptoms are matched then doctors ask for the following test to be conducted in order to confirm for KD.

Once the KD is confirmed through different tests its treatment procedure has to be initiated instantly in the hospital as this disease includes many complications. So the affected children must be admitted to hospital in order to avoid the further risk associated with the heart.

In the initial phase of Kawasaki Disease treatment, some medications are given to the affected children in order to recover them from the suffering condition.

This therapy is continued for several weeks until the patients get relieved out of the KD symptoms. Also, the patient is kept under constant monitoring to check out any unexpected side effects like pox etc.

The Corticosteroids & Tumor Necrosis Factor Inhibitors: This therapy is applied for the treatment of KD in initial phase under the case if other therapies are not working effectively.

Fluids Injected: Under these treatment procedure fluids needs to be provided to the children for avoiding dehydration.

If the symptom of KD doesn’t get relieved in the initial phase treatment then a long-term treatment procedure applied for curing it completely. Treatment in this phase been described in the following points.

After going through all these treatment procedures mostly children get completely relieved from KD. Only in very rare case recurrence of Kawasaki Disease is detected in very few numbers of children.

Most of the children who develop Kawasaki Disease get relieved after its treatment so its best prevention procedure is considered to be instant treatment should be given once the symptoms are identified.

Though still any approved prevention method is not been identified but most likely there is no chance of reoccurrence of this disease. As per surveys, only 3% of children out of 100 develops a heart problem

As accurate causes of KD is not yet been cleared so there is no any fix prevention procedure for preventing it. Only the parents can do for the safer side go for early diagnosis so that any further complication doesn’t occur to the affected children.

As we know by the records that KD develops primarily in children aging between six months to five years. So in case of a fever lasting for five days and other symptoms of KD get matched then without making any further delay they should reach to the pediatrician.

Proper hygiene and cleanliness should be maintained since the child take birth so that any hidden infection doesn’t occur causing Kawasaki Disease after six months.

Children should be protected from the dust and pollution in the roadside area or out of any stagnant water. As any infected bacteria or virus can easily attach to the kids under aging five.

As Kawasaki Disease mainly spreads in winter seasons so children need special care and attention at this particular time so that they don’t get attacked by KD.

KD is one of the rarest diseases but then also if its symptoms get identified, immediate medical treatment should be provided as because any negligence in initial time can cause serious heart problems.

If the fever of any child doesn’t get relieved by medication longer than three days then parents should visit the pediatrician without any further delay. All the treatment procedures should be followed strictly without any negligence, recommended by doctors for the healthy life of the children. Also further follow up should be maintained for relieving any complications.

As it is a rare and uncommon disease so still the Causes of Kawasaki Disease not yet been identified. Parents of children under aging five need to be aware of its symptoms and must not ignore any fever lasting more than three to four days