While most women aren’t exactly excited about menstruation, some realize its importance when it does not appear on a month or show up when least expected. Are you one of them who suffer from an irregular menstrual cycle? Have you ever tried to find out the reasons behind your irregular periods? Before I explain the main causes of irregular periods, you must understand the mechanism of the female menstrual cycle.

An overview of menstrual cycle

Periods generally start between the ages of 10 to 16 (the puberty phase) and continues until a woman reach her menopause phase (between the age of 45 to 55). During a woman’s fertile life, eggs within the ovaries mature in a cycle that lasts for nearly 28 days. On the fifth day of the cycle, around twenty eggs mature within the follicles of the ovaries. Each follicle is just like a tiny fluid-filled sac. On day fourteen, one of the follicles usually matures earlier and releases its matured eggs to be fertilized. The rest of the follicles are reabsorbed by the body. The mature follicle changes into ‘corpus luteum’ which is responsible for producing hormone progesterone to prepare the uterus in order to receive the fertilized eggs. If the egg is not fertilized, it either dies or disintegrates and the corpus luteum withers. This causes the uterus to shed it lining, which called endometrium is thereby causing bleeding of menstruation.

What is regular menstrual cycle?

Having regular menstrual cycle indicates that the interval between periods is consistent. The cycle is usually 28 days. However, in some cases, the cycle can range from 20 to 35 days. On an average, a woman, get her period for three to seven days once a month.

What is irregular menstrual cycle? 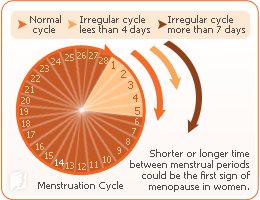 Irregular menstrual periods are a common problem especially among the teenagers. These may have several possible causes and demands a proper treatment.

What are the causes for irregular menstrual cycle?

Besides pregnancy, there are a few primary causes of irregular periods

Excessive body weight or obesity can cause menstrual problem. The fat cells produce excess androgen thereby influencing the ovaries to think that the body is pregnant so the menstruation stops completely, it can also cause insulin resistance that leads to polycystic ovary syndrome (PCOS). Usually, women with PCOS problem don’t ovulate and have irregular periods.

Polycystic ovary syndrome (PCOS) is a set of problem that affects women’s ovaries. PCOS is the result of hormone imbalance in the body. Each month, the hormones that actually trigger follicle development aren’t high enough to get the follicles to ovulate. But the follicles are stimulated enough to cause cysts. Eggs in the ovaries grow into small lumps called cysts. These lumps stop the eggs from leaving the ovary and cause infertility. When ovulation does not occur, progesterone is not produced, leading to missed or irregular periods. As said earlier, too much insulin in the body increases the production of androgen which causes problems with ovulation. The common symptoms associated with PCOS are hair growth, dandruff, ovarian cancer, weight gain and heart disease.

Eating disorders are psychological problems marked by obsession with food and weight. Eating disorders like anorexia nervosa and bulimia nervosa or binge eating are likely to plague teenage girls and young women and greatly affect their reproductive system and cause problems with infertility

Anorexia nervosa is characterized by weight loss due to excessive workout and dieting, sometimes reaching the point of starvation.

Bulimia nervosa is characterized by overeating followed by purging and other behaviours to compensate for overeating. It is closely associated with the feeling of loss of control about eating. Bulimia is usually triggered when young women attempt restrictive diets, fail to execute it and react by binge eating.

Binge eating is characterized by the episodes of extreme overeating and the feeling of loss of control about eating.

If any women observe any of the above mentioned symptoms, she is likely to have eating disorders problem and experience irregular periods. Women with Anorexia nervosa are more involved in strenuous exercises that may suppress their periods while women with Bulimia nervosa and Binge eating are obese thereby causing infertility.

Thyroid function and menstrual cycle are linked through the endocrine system. This system controls the release and distribution of hormones in the body. A woman with irregular periods may have a thyroid disorder. Thyroid gland is controlled by hypothalamus and pituitary gland and is linked to problems like hyperthyroidism (overactive thyroid) and hypothyroidism (underactive thyroid). These are the primary problems responsible for irregular menstrual periods. If a woman notices a significant shortening of her periodical cycle that lasts longer than her average duration, she is suffering from hypothyroidism. While a woman who notices that the interval between periods is exceptionally long or a complete absence of one month’s period, she may be suffering from hyperthyroidism.

Low thyroid hormone function is closely associated with irregular periods and sometimes with heavy bleeding as well. Both the overactive and underactive thyroids affect ovulation and increase the risk of cysts development.

Certain medicines such as birth control contraceptives pills may cause lighter, less frequent, skipped periods or no periods at all. Other medicines that can cause missed periods include

And illegal drugs like cocaine affects a woman’s menstrual cycle.

During pregnancy, the body produces different types of hormones that cause menstruation to stop. Women experience lighter than normal flows or late periods before the menstrual cycle stops completely.

Other causes of irregular periods

If you skip your periods frequently, consult with a healthcare professional who can rule out the root cause and determine how to help you.