A newborn baby has only three demands. They are warmth in the arms of its mother, food from her breasts and security in the knowledge of her presence. Breastfeeding satisfies all three ~ Grantly Dick-Read

Human milk is uniquely suited for infants. Research studies have shown that children who have been breastfed have less chances of obese, overweight and have higher IQs. A comprehensive body of scientists have supported that breastfeeding offers long-lasting and inconvertible health benefits for both mother and baby. It is recognized as preferred form of infant nutrition by American College of Obstetricians, the American Academy of Family Physicians and American Academy of Pediatricians. Breastfeeding helps infants to experience development advantages and enhanced health throughout their lives. Breastfeeding also provides tremendous advantages to the mother and choice to breastfeeding brings economic benefits and saving for society.

Several research studies have suggested that support for pregnant women can increase the breastfeeding rates in a dramatic way. According to APP research report, currently 16% of Americans breastfeed their children, which is below the goal of 25% targeted breastfeed. Mothers who breastfeed their infants are rewarded with couple of benefits. Children who have been breastfed have greater resistance to infectious diseases and great immunity against the diseases. The rate of chronic diseases is lower in such group of people.

Several scientific researchers have concluded that breastfed children have lower rates of infectious disease. The explanation to this immunity is found in mother’s milk.  The immune system begins to produce secretory immunoglobulin when a mother is exposed to infectious agent. Immunoglobulin is a major compound which to fight in our immune system. The compound substance is moved to mother’s breast milk and consumed by her infant. Although children own immune system might be producing S-IgA, but for children under age of two have still lower response from this immune system. Using mother S-IgA not only protects the children against disease, but also it would be stimulating S-IgA in infants.

The research data illustrated that infants who had been exclusively breastfeed for long time, there were 61% less chances of infectious diseases in those children. Research study also illustrated that mechanism of breastfeeding is different from those of bottle-feeding, because breastfeeding brings better drainage of the fluid.

Medical specialists and researchers suggests that breastfeeding protects premature infants from life-threating gastrointestinal disease and lower rates of chronic disease. Since human milk is ideally composed for the children, some metabolic diseases are less likely to occur if infant was breastfed for two years. A research report has concluded that Type 1 diabetes have become more prevalent because of lower breastfeeding rates in recent times. This mentioned report has told that type 1 diabetes in children is because exposure to cow’s milk. The structure of this protein is similar to one that is found in human milk, but it also destroys the human pancreatic beta cells as well. Chances of type 2 diabetes are more likely to happen because of less breastfeeding history of child. Children will be protected from chronic respiratory conditions if a stronger immune system has been developed, which is directly liked to mother’s breast milk.

Along with protection from range of chronic and infectious diseases, breastfeeding also improves the future health of a child and reduces the risk of obese or overweight. In Germany, a research study was conducted to assess the weight and height of over 100,000 children and breastfeeding process was investigated and divided to 1 month, 2 month, 4 months or more. This research study concluded that for breastfeeding period of more than 1 year, risk of obese or overweight was reduced by 57% to 72% in infants. Research studies in favor of breastfeeding have developed a long list of protections and children are protected at high rates from chronic and infectious diseases. 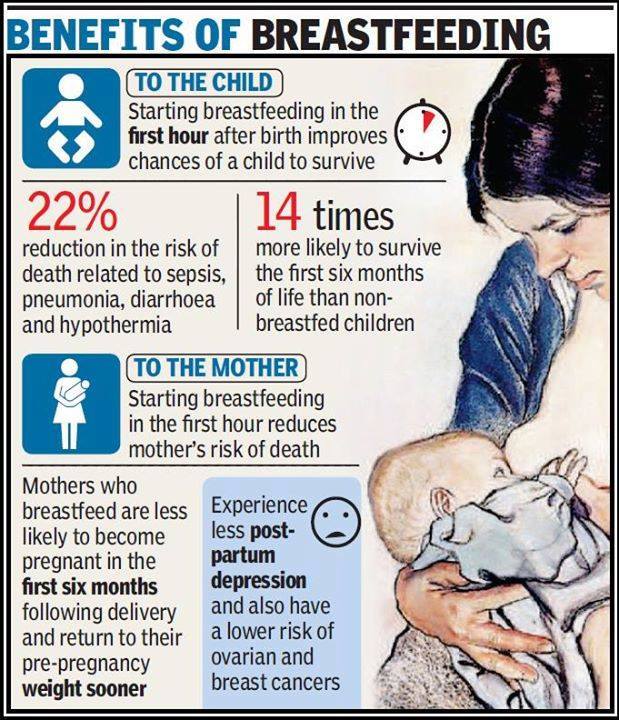 Some More Benefits are:

A choice to provide breastfeed to an infant will not only bring health benefits but also a huge benefit for the family. When infants are fed formula milk, total cost is estimated to be $1200 to $2600 per year, based on preparation purchased. When this value is extended to family and clinics, the amount of saving is tremendous. Increasing breastfeeding has been a major concern in United States and various education programs under in progress to increase the breastfeeding rate of American mothers. According to a recent study, knowledge and education about breastfeeding can be a powerful factor to help mothers determine the goal of breastfeeding their infants.

A videotape planning in WIC clinic of Baltimore doubled the rates of breastfeeding only in 16 weeks. Various informative material and education should also be available for expectant fathers, because research studies have shown that mother’s choice to breastfeeding is also effected by her husband attitude about respective matter. Governments and families can experience billion dollars saving by expediting the breastfeeding rates. Breastfeeding is a preferred choice for infant health and growing strong in his life.

Cost of infant formula has been increased by 150%, but breastfeeding is economical and right choice for the mothers. Breastfeeding is environmental friendly as it needs to fossil fuels for its manufacturing. There are no byproducts to pollute the environment as alternatively to infant formula manufacturing industries that have been creating pollution and increasing burden on our landfills.

With so many benefits for both mother and baby most medical practitioners will recommend breast feeding as the first option for new mums. There are some instances when breast feeding is not possible such as if you are taking certain medication or if you are undergoing radiation therapy. These are things that you and your midwife will be well aware of from the outset of the pregnancy and therefore can be discussed early on.

Some women have reservations when it comes to breastfeeding but most of these can easily be overcome. Most women report an initial discomfort when breast feeding, especially if the baby doesn’t latch on properly, but with a little bit of practice the discomfort should subside.  Also, some women feel self-conscious about breastfeeding in public. As long as it is done discreetly most people do not mind seeing a mother breast feeding and there are now some fantastic ranges of maternity lingerie that make this much easier.

Whilst formulas have come a long way in the last few years they still do not contain the same nutrients, antibodies and hormones that can be found in living breast milk. Some women choose to do a mixture of breast, express and formula feeding dependent on their personal experience and preferences. Always talk to your midwife or doctor before making any changes to your routine.