Cancer is a fatal disease that can occur in almost any part of the body, including the gallbladder. The gallbladder is a small organ behind your right lower ribs, situated just under the liver. The job of the gallbladder is to concentrate and store the bile which is released by the liver to help digest food. 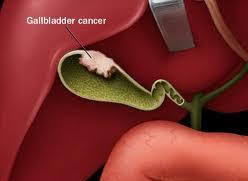 Researchers working on gallbladder cancer have pointed out that one of the major causes of the disease could be continuous inflammation of the gallbladder. This happens when you have gallstones and the gallbladder is not able to release bile in a normal manner. When the chemicals in the bile stay inside the gallbladder for a long time, its cells may get irritated and may cause the cell DNA to change. This may trigger an unnatural growth spurt, and the cells can start growing and multiplying abnormally, resulting in cancer.

The presence of abnormalities in the ducts, which carry bile from gallbladder along with other fluids from the pancreas to the small intestine, can also cause the juices to flow back to the gallbladder, thus inflaming and irritating its cells and increasing the risk of cancer.

Symptoms and Diagnosis of Gallbladder Cancer

During a routine examination, cancerous tumors in the gallbladder may not be easily detectable. So the diagnosis of gallbladder cancer can be a tricky job.

Symptoms become obvious only after the cancer has spread to a considerable extent. The symptoms can range from abdominal pain, nausea, loss of appetite, severe itching, and chronic fever, to very dark stools. When cancer blocks the bile duct, then bile cannot flow to the intestines. This causes the chemical bilirubin to accumulate in different parts of the body, resulting in jaundice. So a person who has gallbladder cancer can have yellowish skin. Cancer can also cause the gallbladder to enlarge due to accumulation of bile. Cancer also causes lumps in your lymph nodes. These symptoms are not always accurate indicators of gallbladder cancer. A physical examination alone is not sufficient to determine the presence of cancer. You may also need to perform a screening or biopsy. Lab tests, imaging, ultrasound, CT scan, MRI scan, cholangiography, angiography, laparoscopy and biopsy are the various checks that are usually carried out to determine the presence and extent of cancer in the gallbladder.

Generally, once gallbladder cancer is detected, it is graded according to its severity. Health care centers have teams to help patients suffering from gallbladder cancer. They discuss various treatment options and possible side effects of these treatments with the patients and their family. With inputs from the patient and family members, they then chalk out a specific treatment plan. The cancer team consists of a surgical oncologist, a radiation oncologist, a medical oncologist, nurses, psychologists and other health experts like dieticians. They help the patients understand the goals as well as the side effects of the treatment.

Before making a decision about the best course of treatment, you must also consider the opinions of the medical team and also clarify all your doubts and questions with them. Some of the common treatments of gallbladder cancer are listed below. Consider each option carefully before you make the final decision.

As noted before, gallbladder cancer is usually detected at a very late stage. In such cases, the tests might show that the cancer cannot be completely removed by surgery. If you have been recommended surgery as one of the treatment options for gallbladder cancer, then make sure that you get it done at a reputed cancer center. The surgery is quite complex and must be performed only by an experienced surgeon. Choose your hospital and surgeon wisely. Even if the cancer is not completely curable by surgery, you may still be advised to undergo an operation if your oncologist notices complications such as blocked ducts. This is called palliative surgery, which can help with symptoms like extreme pain, and improve the quality of life.

Radiation therapy involves usage of high energy rays from a machine to destroy the cells that are infected with cancer. The procedure is painless but is conducted in multiple sittings, which are spread over several weeks. A radiation team takes measurements to assess the precise angles to aim the beams and the dose of radiation needed.

Chemotherapy is a treatment which involves giving anti-cancer drugs to the cancer patient, orally or through an I.V. channel. The drugs reach every part of the body via the bloodstream and help reduce the growth of cancerous cells. This treatment is useful when cancer has spread to other organs as well. Chemotherapy is given in periodic cycles, allowing the body some rest to recover from the previous cycle.

You might need to undergo one or more treatment options simultaneously, depending on the severity of cancer. There are possible side effects for all treatments such as fatigue, hair loss, loss of appetite, mouth sores and diarrhea. After weighing the pros and cons and considering the advice of your doctors, you will be able to decide on a treatment plan that will help you beat the disease. In very unfortunate cases, if the cancer is in a highly advanced stage, the doctors are left with no option but to offer only palliative surgery or palliative radiation to relieve the patient from debilitating symptoms and improve the quality of life.