In ancient times, people believed that a mysterious creature known as the “tooth worm” caused tooth decay and toothache. The legend of the worm was so prevalent that cultures as varied as those in Europe, the Middle East, South Asia, and the Far East had their own versions of the myth.

One can only imagine the sense of dread and frustration that the ancients must have felt as the despicable critters bore through their choppers unseen, wreaking havoc in their wake. The worms, it was said, caused pain when they moved and bit their way around inside the teeth, and the ache only stopped whenever the creatures rested.

Early physicians recommended a variety of asinine remedies to try to draw out the tooth worm, one of which was to fumigate the teeth with smoke from burning hyosycamus and charcoal. The fume may indeed have provided sufferers temporary respite from the pain, as the hyosycamus is a narcotic plant from the nightshade family.

Most of the time, however, the treatments didn’t work, so doctors resorted to pulling the teeth entirely. It was during these times when the tooth worm — or at least what the tooth pullers thought were the tooth worms — saw the light of day. What were mistaken for worms, in fact, were most likely the dental nerves, the extraction of which would have certainly caused excruciating pain for patients who lived during a time when medical anesthesia was not yet available.

Then there was root canal treatment

We now know that tooth decay is not actually caused by tooth worms but by something more minute: bacterial activity. When tooth decay wears away a tooth’s white enamel surface and dentin, a soft tissue called the pulp becomes exposed to bacteria. The pulp is largely made of living connective tissues and blood vessels, but it also contains nerve networks. When these nerves become infected and the tissues become inflamed, pain is felt by the individual suffering from tooth decay. Aside from decayed teeth, however, pulp infection and inflammation can also be caused by a variety of other tooth defects, including trauma or injury to the teeth, faulty dental fillings and devices, and random fissures on the surface and inner layers of the teeth.

Fortunately, we no longer have to resort to questionable medieval treatments to address these problems. Nowadays, there are various scientifically sound dental procedures we can rely on when we develop tooth decay or suffer from teeth-related injuries. One of these procedures is the root canal treatment. 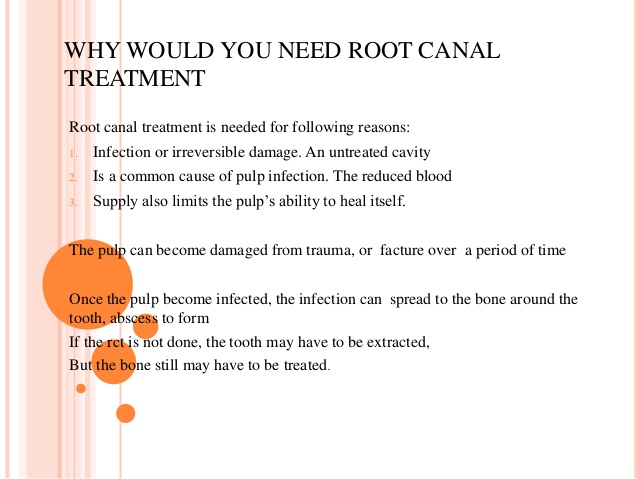 What are the advantages of root canal treatment?

Root canal treatment becomes necessary when the root canal system, which contains the pulp, becomes infected and inflamed. Remember that an abscessed tooth can cause serious health problems. If left unchecked, the infection can spread to other areas of the jaw, neck, and head. The infection can also spread throughout the body, causing sepsis and triggering multiple organ damage. This can prove to be an extremely life-threatening condition. Any reasonable individual would do well to get immediate professional help when they experience endodontic infection during its early stages.

Often, badly-decayed and infected teeth don’t have to be removed completely. The fact that root canal treatment allows people to keep their original teeth is one of the most important benefits of this treatment. Furthermore, root canal treatments are also generally much more affordable than getting teeth replacement devices like dental implants.

Teeth that receive root canal treatment can continue to function like normal teeth. Aesthetically speaking, root canal treatments can even improve the appearance of decayed or damaged teeth because the application of dental fillings or dental crowns is necessary to protect the teeth being treated from future damage.

Some More Benefits of Root Canals

How is root canal treatment carried out?

One can think of a root canal treatment as a more extensive dental filling procedure. Although it can be painful because the endodontist will be working on infected and inflamed tissues and nerves, the procedure is done with anesthesia. The point of getting the treatment in the first place is to remove the infected pulp, which is causing the pain. Root canal treatments are also pretty straightforward, and they can be finished within one or two sessions.

The following are the usual steps followed by endodontists when doing root canal treatments:

It is normal to feel tenderness or sensitivity on the tooth that received root canal treatment for as long as two weeks. Take note, however, that extreme pain and swelling are not normal and may indicate infection.

As part of the precautionary measures that you should take in taking care of your teeth, it is very important that you are able to maintain good dental hygiene.  Though not for get to brush your teeth every day and make sure that you are able to keep in contact with your dental health care professionals so that you would be able to monitor any changes that might happen within your teeth.

It is also important that you are able to regularly have your teeth cleaned so that you would not have an accumulation of dirt and other bacteria inside and in between your teeth.  Remember that your teeth are very fragile.  For this reason, you have to take care of it as much as you can.

In addition, you also must remember that if you lose one of your permanent teeth, you would not be able to replace it.  It will be best to maintain your teeth at an early age so that you would not end up having more dental complications in the future.

Although not all endodontic treatments are successful, an overwhelming majority of them are. People who had successful treatments can expect their treated teeth to serve them for a lifetime, provided, of course, that they give these teeth the right care that they need.