Drug abuse can be lethal! It’s clear to see:  According to the United Nations Office on Drugs and Crime, in 2012 there were nearly 200,000 drug-related deaths worldwide. That is a terrifyingly large figure that doesn’t even account for the number of near-misses and drug-related illnesses.

How would you feel if this happened to your brother or your daughter or your best friend?

The hard truth is that even if an individual’s drug abuse isn’t fatal it WILL be hugely detrimental to his or her health. So here is a comprehensive guide explaining the effects of different drugs on your mind and body:

Cannabis is a psychologically addictive drug and it is possible to get withdrawals when you come off the wacky baccy.

Cannabis abuse can cause the following problems:

Cocaine is a highly addictive drug, in which users experience a very strong psychological dependence on the substance. There are a few different types of the drug that have different names including crack, freebase and powder cocaine or coke.

Users of cocaine often feel a happy and energetic buzz when high. Unfortunately, this gives them a confidence that causes extremely risky behaviour. Plus, the high is followed by a hard-hitting come-down from the drug that often leaves the user feeling depressed or sick, and these horrendous feelings can last for days.

Here are some of the health problems that can be caused by cocaine abuse: 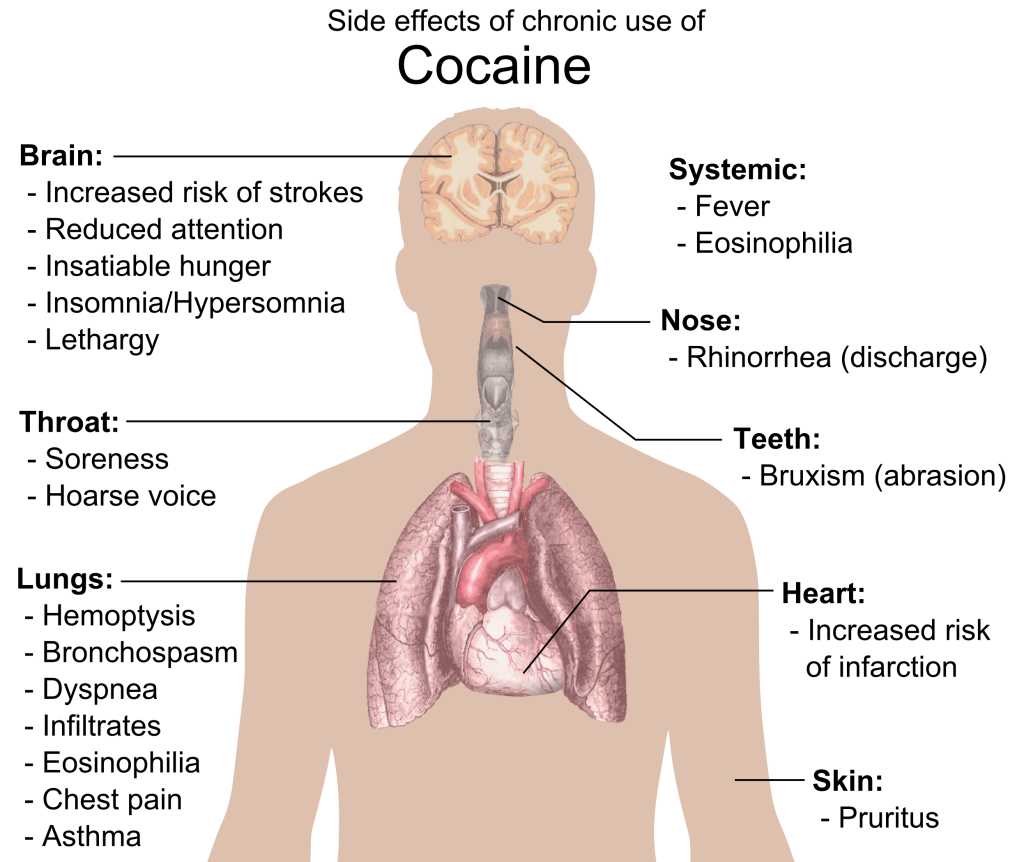 Street heroin is an extremely strong painkiller taken from the opium poppy, which some people mistakenly think won’t be addictive. It is highly addictive, and people get addicted very very quickly!

The feelings that a user will experience are warmth, relaxation and even sleepiness. Much less enticing is the fact that the first dose of heroin can make an individual physically sick and experience dizziness.

It is perhaps one of the most dangerous drugs out there due to the fact that it is consumed intravenously i.e. injected. Users sharing needles might catch harmful infections and life-threatening diseases from one another.

Here are some of the rather dangerous effects that heroin can have:

The psychedelic drug ecstasy is sold in many guises, as pills, crystal or MDMA. It can be an addictive drug, especially in the sense that users often build up a tolerance to E and therefore have to take more of the drug to achieve their high.

The strange effects of ecstasy include feelings of alertness and affection towards others. It also makes the user chattier and experience things like music or colours a lot more intensely. On the downside, upon taking ecstasy you might feel anxious, confused and experience paranoia or psychosis.

Some of the detrimental effects of the drug ecstasy include:

The white-ish or pink powder, commonly known as speed is highly addictive and can have particularly negative long-term results on the users mind and body.

Like with other stimulants, speed users tend to feel confident, alert and energised after taking the drug. But confusion, paranoia and psychosis are also possible, along with feelings of agitation and aggressiveness – not good.

Here’s how amphetamines can affect your health:

Remember than many of the above-named drugs can be consumed in different ways – they might be snorted, dabbed onto gums, injected etc. Every time you share needles with other drug users (whether you’re taking heroin, speed or any number of drugs)you run the risk of contracting HIV or hepatitis C, as well as suffering from vein and tissue problems.

What can you do if you or somebody you know is addicted to one of these substances?

As we’ve learned by now, excessive drug use can be extremely dangerous if not fatal. Illegal drugs can cause serious mental and physical health issues. The only solution therefore is to quit the stuff, and quit it for good. There are a variety of options available to those looking to get off drugs.

If you’re struggling to give up your drug habit then you must identify all of the reasons why you want to quit. As you have already seen there are a plethora of health problems caused by drug abuse, not to mention the related economic and social problems. Now you know why you want to quit, establish what you want to achieve and make a strong commitment to kicking the habit for good.

You’re not alone. The first step is reaching out to those who love you for help and support. It may be the case that you first need to ask their forgiveness. If you’re lacking support then visit online communities and seek out like-minded people going through the same things you are.

Alternatively you may wish to seek out professional help, such as drugs counselling, or even enter a rehabilitation centre. If you don’t have the financial means just yet to do that then start by looking at online resources that could help you on your way to recovery.

There will be certain people and places that could encourage you to go right back to square one. For example, your old buddies you used to do sniff with could be a bad influence. And attending parties before you’re ready might not be a good idea. Instead seek out positive spaces and interactions to avoid any relapses.

When people take drugs they often don’t think of the consequences, for them and their families. The hard truth is that excessive drug use can be extremely detrimental to your health, even if it’s “just a bit of weed”. Save yourself the mental and physical hardships that will certainly come by taking the appropriate steps towards recovery now.