Amyotrophic lateral sclerosis (ALS) is a nervous system disorder that affects the nerve cells of your brain and spinal cord leading to loss of muscle control. It is defined as a group of progressive neurological diseases that causes dysfunction of different nerves that helps in muscle movement.

This disease is a progressive and degenerative disease of the neurological system. This fatal neurological condition causes the breakdown of motor neurons that control voluntary movements. Over 20,000 people in the U.S. suffer from this disease and probably many more worldwide. It is most common in men in the fourth through sixth decades of life.

It is also known as Lou Gehrig's disease after the renowned baseball player who diagnosed with this disease in the 1930s. The actual causes of amyotrophic lateral sclerosis are not known but in some cases, it is diagnosed as an inherited condition.

The symptoms of ALS starts with muscle twitching, limb weakness, and slurred speech. But in later stages it affects the patient’s control over their muscles required for movement, eating, breathing and speaking which makes it fatal. As of date, there is no fixed cure for this fatal disease however with treatment its symptoms can be relieved making the life of affected persons much better and improved.

It is a very popular Motor Neuron Disease or MND. As per the Centers for Disease Control and Prevention (CDC) in 2016 there were 150000 people diagnosed with this fatal disease in the United States and the annual diagnosis rate of this disease is increasing year by year. This is the reason its awareness is so important to reduce its impact and growth rate around the world.

People who develop ALS usually live up to 3 to 5 years from their first experience of symptoms. However, 10% of the patients of this group lived for an extra 10 years or even more. 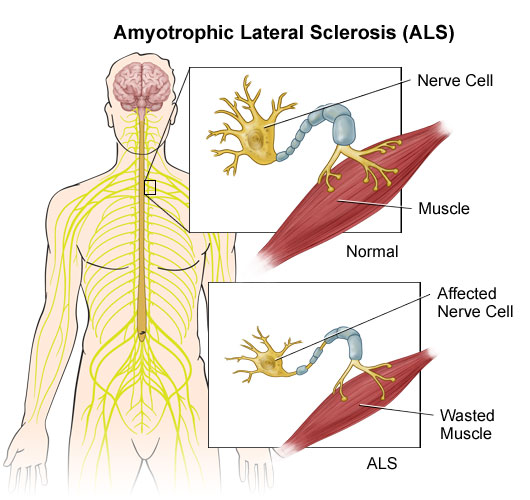 Amyotrophic lateral sclerosis (ALS) symptoms differ from person to person depending upon the specific neurons which are affected in an individual case. However overall its signs or symptoms include the following-

This health issue initially starts in hands, feet or limbs in most of the cases and then it spreads to other organs of the body. In its growth phase, the muscles get weaker and nerve cells destroyed resulting in the patient's difficulty in breathing, speaking, chewing and swallowing.

Usually, ALS doesn’t develop any pain in its early stage and even the pain on its later stages are uncommon. However, even in its later stages or growth phase, it doesn’t affect to patient’s senses and control over the bladder.

The exact causes of ALS are unknown but depending upon its specific signs it is divided into two types that is sporadic ALS and familial ALS. However, what role actually genes play in its growth is not clear.

However, the growing risk of this disease in teenage is a very rare condition. The actual genes responsible for this health problem are still under investigation process.

Apart from these two types of ALS, the possible reason or uses of ALS include-

According to this theory, some possible linked determined between the ALS and following environmental factor-

These environmental factors though considered playing its role in ALS disease but there is no evidential proof that changing a lifestyle can reduce the risk factors of this fatal disease.

It is quite difficult to diagnose ALS in its initial stages because its symptoms mimic other common neurological diseases. However, the test which is required to identify or diagnose this or other similar neurological conditions if it is there includes-

The blood and urine samples are taken for the laboratory test which helps a doctor to eradicate other possible causes or conditions that they assume for your signs and symptoms.

MRI test shows a detailed and every minute detail or images of your brain and spinal cord through radio waves and a powerful magnetic field. This powerful imaging test helps in finding out other possible conditions of your symptoms such as herniated disk in your neck, spinal cord tumors, etc.

This diagnostic test helps in measuring the ability of your nerves to send impulses to your muscles of different parts of the body. This test will rule out whether any nerve has damaged, or you have developed any muscles or nerve diseases.

This is a very important diagnostic test that helps in detecting ALS disease. In this particular test, the doctor will insert a needle electrode via your skin into different muscle sections. The EMG test helps in evaluating the abnormalities of the electrical activity of muscles like when they contract and when they are at rest. The abnormalities of muscle electrical activities help in ruling out ALS. Also, it helps in exercise therapy to design this therapy according to a particular scenario.

Under the condition where a healthcare specialist believes that you have developed a muscle disease, not the ALS, they will ask for this particular diagnostic test. Local anesthesia is used before starting the procedure of biopsy tests so that the patient will not feel pain and cooperate during the procedure. A small portion of your muscle is taken and sent for a laboratory test for detailed analysis.

In this particular test, a small amount of your spinal fluid is taken through a small needle and sent for the laboratory test. The needle is inserted between your two vertebrae in the lower back.

The ALS treatment helps in controlling and reducing the progression of its symptoms. Also, it prevents complications risks which can cause major health damages. It ensures that you can live more comfortably and independently. However, its treatment cannot reverse the damages which are already done to your nerves.

This ALS treatment is conducted under the supervision of a team of doctors having expertise in different areas of health. With this kind of professional treatment, your survival period may increase and your quality of life will improve.

This healthcare professional’s team will suggest different treatment options to you and you contain a right to accept or deny any of the suggested treatment procedures.

The FDA has approved the below mentioned two drugs for the treatment of the ALS disease.

This FDA approved drug is taken orally which helps in increasing the life expectancy of the patient by three to six months. It can develop certain side effects such as dizziness, changes in liver function and gastrointestinal problems. This is the reason your doctor will closely monitor your blood counts and liver functionality to check the abnormalities if there, after the intake of this medication.

This FDA approved drug for ALS treatment is given via intravenous infusion. It helps in improving your daily functioning. Its effect on increasing patient’s life expectancy is not yet clear. However, its side effects which can appear after its conception include headache, breathing shortness and bruising.

Apart from these two medications, your doctor may also prescribe certain medications that can provide you relief from different symptoms associated with this disease such as-

The following therapies are used or suggested to the patient for relieving the symptoms of ALS disease.

Under the physical therapy, a physical therapist will look for the issues in areas like walking, mobility, pain, adjustment with bracing and other equipment to ensure that you can live more independently.

Regular practice of low impact exercise helps in maintaining your cardiovascular health, strengthen your muscles and improve your motion for as long as it is possible.

Also, these exercises help in improving your mental health or well being by making you feel refreshed and enthusiastic. The physical therapists help in the easy adjustment to a brace, wheelchair, and walker for easy mobility and reducing the dependency of the patient on others.

The speech therapy helps you to manage and improve slurred or disturbing speech caused by ALS. A speech therapist teaches some adaptive techniques that help in making your speech much understandable than before.

Also, they teach or guide about other techniques of communications like pen, paper and alphabet board. The patient can also rent or borrow from the therapist certain computer-based equipment with text to text speech applications or synthesized speech which makes the communication process much easier and comfortable.

With the progression of ALS disease, it impacts your breathing function which makes it fatal. So this therapy helps you in coping with difficulties in breathing caused by muscle weakness.

The healthcare specialist will test your breathing on a regular basis and provide you certain devices that can help in breathing during the night hours when you sleep. The doctor will insert a tube in a surgically generated hole at front of the neck that leads to your windpipe.

In this particular therapy, an occupational therapist will help in finding different ways that can keep you independent in spite of your hands and arms weakness.

Certain adaptive equipment given to the patients which help them in performing their daily life tasks on their own such as eating, bathing, dressing and grooming themselves. The therapist will also ensure that your home remains perfectly decorated that you have easy access to every other necessary thing and you find them within your reach without any difficulty.

As the ALS patient has difficulty in food swallowing so in this particular therapy the therapist will ensure that you eat only those foods that are easy in swallowing and can fulfill your daily necessity of nutrition in the body. They will give a diet chart to your family members that you need to follow to ensure your body doesn’t lack nutrition. In certain cases, a patient may require a feeding tube especially in the progression stages of ALS.

As per one study report published by the journal Annals of Neurology bright and colorful foods such as fresh fruits and vegetables can prevent and decrease the risk of amyotrophic lateral sclerosis (ALS).

Carotenoids are the essential substance that gives fruit or vegetables its bright color such as red, yellow, and orange which can prevent the onset of ALS disease. It is also a good dietary source of Vitamin A.

Some researches show that oxidative stress plays a crucial role in causing ALS. So this issue can be prevented by consuming foods rich in carotenoids and Vitamin C as they are rich sources of antioxidants that can easily protect your body against oxidative reactions.

The good news is that the life expectancy for ALS sufferers is often 10 to 20 years after diagnosis. Some cases progress faster with a life expectancy of 5 years or less. One well known sufferer of ALS, Stephen Hawking has lived since the 1970’s with the disease. There is no prediction which patients will progress slower or faster.

It is important to seek medical attention if any symptoms of this disease appear. With proper medical care, proper medications and healthy lifestyle choices the effects of the disease can be lessened and patients can be made comfortable.

These preventive measures can help you in avoiding triggers and causes of amyotrophic lateral sclerosis so that you won’t get a victim of this fatal disease. Also along with different therapy and medications support it is very crucial for the patient to get enough social and their own family support to deal with this chronic condition and its symptoms.