Apoplexy is a medical term that refers to hemorrhage or sudden impairment of a nerve or nerves system. This results in bleeding into an affected organ or loss of blood supply to an affected organ. It is a medical emergency that needs immediate medical attention otherwise in case of delay the apoplexy symptoms can be life-threatening too.

On the basis of affected organ apoplexy is divided into three types that is cerebral, ovarian and pituitary apoplexy. The term apoplexy is an old medical term nowadays it is called a stroke by the healthcare professionals. It simply denotes a furious situation or a person being furious more specifically “apoplectic”.

The sudden onsets of its symptoms are very frightening which occurs as a result of bleeding in an internal organ. The three types of apoplexy are segregated on the basis of its affected organ-like in the case of ovarian apoplexy bleeding occurs in the ovaries.

It is very crucial that everyone should have full knowledge of its associated symptoms in order to get immediate medical attention and for preventing its major complications risks which can risk to your life. So let’s start the discussion of all three types and necessary details about each one of them.

Cerebral apoplexy is considered as sudden disease as its symptoms which are a fatal one, develop suddenly caused by endogenic, spontaneous and non-inflammatory disturbances circulatory vessels including the cerebral blood vessels.

In this particular health condition, the health specialists look for the exact location as well as an extension of the apoplectic cerebral lesions followed by embolic cerebral occlusions in patients affected with permanent arterial hypertension, and arteriosclerotic apoplectic lesions.

An arterial occlusion induced cerebral infarction can lead to vasomotor paralysis that is loss of autoregulation and responsiveness to carbon dioxide. In certain cases hypercapnia dilates the vessels of the nonaffected brain that leads to an increased rate of blood flow to this area whereas blood pressure falls or reduced in collaterals resulting in the blood flow and focus reduced to the infarct. This condition is known as steal syndrome.

The role of hypertension in cerebrovascular disease and major changes in the cerebral blood flow in cerebral infraction needs a detail study and researches in this context.

Cases where blood flow is reduced to the non-affected brain by vasoconstriction as a result of hyperventilation, an increased rate of blood may be shunted in the infract, known as a reverse steal. In this condition, auto-regulation is lost. Vasoconstriction is considered as an effective treatment method in such a situation.

However, this technique doesn’t show much improvement in the cases of patients with a major cerebral infraction, whereas the benefits and effectiveness of hyperventilation for the patient with mild cerebral infarction are not yet clear. This requires a detailed study in this sector.

For the treatment of transient ischemic attacks with anticoagulant or surgical reconstruction of the related artery is under discussion and needs detail study.

Keep your blood sugar level and blood pressure level in check as these are two primary contributing factors for Cerebral apoplexy or stroke. Make necessary changes in your lifestyles including your diet, workout routine, etc to ensure that your sugar and blood pressure remains in normal condition.

Quit smoking and excessive consumption of alcohol which are dangerous for your blood pressure and blood sugar level of your body as it can give a quick boost to these conditions increase your risk of stroke. As per the health specialist only by keeping your blood pressure level in good condition you can easily reduce your chances of stroke risk by 60 percent.

Keep your body weight in control position as overweight or obesity especially fat in the abdominal section of the body elevates your sugar level quickly. Also, it can raise your body’s bad cholesterol level which again increases the risk of stroke. Eat only nutrient-dense and healthy foods to keep your cholesterol in check and to prevent the risk of stroke or cerebral apoplexy. 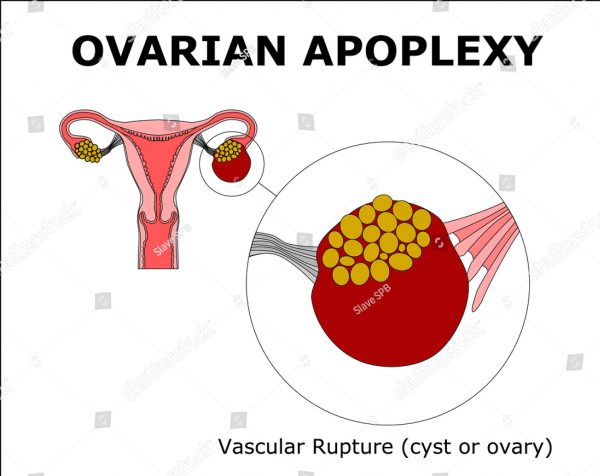 Ovarian apoplexy is the sudden hemorrhage in the ovary that occurs as a result of a rupture of the vessels of Graaf bladder, follicular cyst, ovarian stroma, corpus luteum cystic followed by the bleeding into the abdominal cavity along with the violation of the integrity of its tissues.

This sudden onset of hemorrhage can occur to anyone between the ages of 14 to 45. However, it is very common in women aging between 20 to 35 which is the childbearing age. This kind of hemorrhage is very rare in young girls. Its frequency in gynecological pathology is only 1 to 3%.

Ovarian apoplexy can occur to any woman in their childbearing age and its recurrence risk remains 40 to 60 % in a woman who has already developed this health concern once. The following factors play a prominent role in causing or increasing the risk of ovarian apoplexy.

Apart from these highly influencing factors, ovarian apoplexy can occur in a woman even in the absence of any kind of abnormal health condition. An ovarian rupture can also occur during the sleeping period.

Hormonal imbalance is considered as the primary factor for this disease. For example an increased rate of gonadotropic hormones (FSH and LH) and the lactotropic hormone prolactin. Out of this FSH and LH regulates ovaries function and Prolactin regulates the sex hormone and menstrual cycle.

The ultrasound report of the pelvic organ doesn’t visualize the rupture or hemorrhaging still the fluid retention in the dorsal space can be detected. However, the gynecological examination of the patient’s uterus can easily detect the enlargement in the ovary and its associated pain. The uterus size looks normal in this physical examination. The signs and symptoms of intra-abdominal bleeding remain invisible.

The pain and other symptoms of ovarian apoplexy need thorough diagnostic examination in order to confirm whether the acute abdomen is caused by the ovarian rupture or due to fallopian tube damage caused by the ectopic pregnancy. Also, these examinations help in detecting the existence of appendicitis which can also mimic the symptoms of ovarian apoplexy.

There are two popular methods for the treatment of ovarian apoplexy such as Conservative and Surgical procedures. Out of these, the conservative treatment techniques contain the usage of spasmolytic drugs which helps in relieving pain and give support to your vessels known as hemostatics.

The patient is advised for the complete bed rest in this case. Under this condition, ice is laid on the bottom of the stomach and certain physiotherapy and Vitamin B1, B6 and B12 are given to the patient.

The status of the treated women is monitored 24×7. The cases where the pain is repetitive and the condition of the patient get worse with time surgery is the only option of treatment. This treatment technique is only applicable to the cases where there is no internal bleeding in the abdominal cavity and mild form of apoplexy pain.

About 50% of cases of ovarian apoplexy under this treatment method, the recurrence risk of this disease is quite high in the affected woman along with their high chances of infertility. This is the reason this treatment method is not suitable for the nulliparous women or the women who are planning to conceive later on in their life.

Other than this method, surgery is considered a mainstream treatment procedure for eliminating this pathology permanently. In many cases even with a mild form of painful ovarian apoplexy endovideososcopic or laparoscopy treatment technique is used.

In these cases, the cyst shell is removed and ovarian stitching and coagulation of the vessels are conducted. Once the bleeding stops after the performance of these procedures, the peritoneal cavity is cleaned thoroughly with a disinfectant solution along with removing the blood clots.

The best part of this surgical method of treatment is that a woman can still conceive successfully and give birth to a child, unlike the previous treatment method which increases the risk of infertility. In this procedure, the absence of ovarian adhesions ensures the normal functionality of this organ.

Under the condition of severe ovarian apoplexy associated with severe bleeding and large size, rupture laparotomy is conducted for its treatment. In such cases, an incision is made on the peritoneum wall. In this method, the effort remains towards preserving the ovary and if the gap size is very large then it is mitigated.

In the cases of a mild form of ovarian apoplexy based on the background of hormonal disorder, any specific preventive procedure is not required. This is because after the restoration of ovary function the hormonal level in the body comes to its normal position.

Ovarian apoplexy based on the background of vegetative disorders and vascular disorders accompanied by hemorrhagic bleeding treatment is performed with certain drugs intake for improving the blood supply to the brain and also the oxygen level here. In order to eliminate the internal edema, diuretics are used.

In the cases of painful ovarian apoplexy, its associated symptoms like disorders in hormonal profile, central nervous system and blood circulation in the ovary are reversible with the treatment. So in such cases, any specific prevention technique is not needed.

The patients suffering from a hemorrhagic form of ovarian apoplexy, a disorder in hormonal profile, impaired ovarian blood flow and dysfunction of the higher sections of CNS remain persistent. These patients are treated with comprehensive drug therapy violating the pathogenetic circle. This therapy is conducted for three months aiming to correct the activity of the patient’s brain structure. Nootropics are prescribed for improving the metabolic function in CNS, drugs for improving intracranial hypertension, tranquilizers and cerebral perfusion.

Pituitary apoplexy refers to the acute hemorrhage or infraction of the pituitary gland. This health condition develops symptoms like sudden onset of headache, hormonal dysfunction, affects the mental status and altered visual symptoms. The pituitary apoplexy can be divided into hemorrhagic or ischemic, each one of them contains specific neuroimaging.

This type of apoplexy develops as a result of spontaneous hemorrhages of pituitary adenoma or due to prolonged cut off in its blood supply that leads to bleeding, acute swelling and tumor cell death.

The pituitary is a very small gland that lies at the base of the human brain. It produces many vital hormones essential for controlling different body functions. The pituitary apoplexy occurs either by the bleeding into the pituitary gland or due to blocking the blood supply to the pituitary.

The cases where pituitary bleeding occurs to women either during or just after their childbirth known as Sheehan syndrome which is a very rare scenario.

For the treatment of pituitary apoplexy associated with visual abnormalities and ophthalmoplegia, transsphenoidal surgery is the treatment option often recommended to the patients and performed on their consent.

This is a neurosurgical emergency so doctors should well aware of all the symptoms the concerned patient is suffering from. Here early diagnosis is important as it can reduce the mortality and morbidity risk.

This is a medical emergency situation so any delay in its treatment after its diagnosis can make it fatal. Surgery is only performed once the patient's condition is stabilized on the medical ground needed for performing this treatment method. Endoscopic Endonasal Approach is a common surgical technique for the relaxation of pituitary apoplexy in which the tumor is removed and the affected area is decompressed.

Apoplexy is a life-threatening health condition so it is very crucial for every individual to have awareness about the apoplexy symptoms and causes so that immediate action can be taken which increases its patient’s survival rate.