Stroke is a life-threatening condition that occurs as a result of an interrupted or reduced level of blood supply to a certain area of the brain. As a result of this interruption, brain tissues stop getting oxygen and nutrients leading to they start dying just in minutes. As it is a medical emergency, so it is important to seek immediate medical attention as soon as someone notices the symptoms of a stroke.

Any negligence and delay in treatment can cause even death as just like heart attack, strokes come in the list of the top rank of medicals health conditions that lead to spot death cases. Also even if death does not occur still stroke increases major health complications risk in the affected person such as paralysis in one whole body side etc.

An unhealthy lifestyle routine and certain underlying medical conditions increase a person’s risk of stroke. However, with proper awareness of these causes and factors, everyone can minimize and prevent their risk of stroke and its associated health complications and ensure a long-lasting and healthy life. 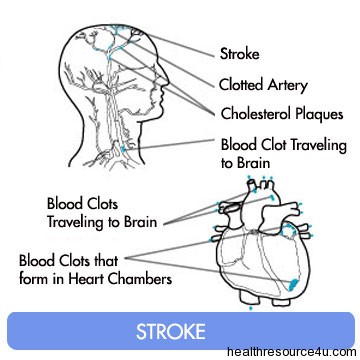 There are only two primary reasons behind strokes which are the medical emergency conditions including loss of blood supply to a part of brain aka Ischemia and Hemorrhage i.e. leaking or bursting of a blood vessel that causes bleeding in the brain.

In some cases affected person only have a temporary disruption of the blood supply to the brain cells which is known as Transient Ischemic Attack (TIA) that doesn’t cause long-lasting effect or symptoms in the affected person. All three types of stroke conditions are discussed below-

A rare cause of bleeding in the brain is a rupture in the abnormal tangle of thin-walled blood vessels also known as Arteriovenous Malformation.

The Transient Ischemic Attack or TIA is also known as a ministroke. It develops symptoms for a temporary period which are similar to those that a person develops in a stroke. The TIA does not cause permanent health damages as it happens with two primary types of stroke. Its symptoms occur as a result of a temporary reduction in blood supply to any part of the brain that usually lasts as less as five minutes.

Just like the Ischemic stroke, TIA occurs when a clot or debris either reduces or blocks up the blood supply to a certain part of the nervous system. Even though you develop the symptoms of TIA then also you should seek immediate medical attention.

It must not be decided by own whether you have developed symptoms for TIA or stroke as any delay in treatment can make you pay off with severe health complications in case your symptoms are caused by a fully blocked or narrowed artery in the brain.

Also, anyone who has developed TIA symptoms that occurs as a result of partially blocked or narrowed artery leading towards the brain contains the risk of developing full-blown stroke later on in their life. 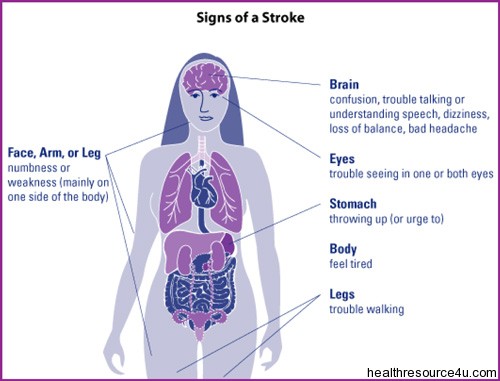 A quarter of all stroke cases occur in people with heart diseases. Heart disease patients usually have irregular heartbeat issues, defective heart valves, and atrial fibrillation which make it’s patient a victim of a stroke at the very early stage of life. Fatty deposits may also cause clogged arteries that lead to stroke.

People who chew tobacco or smoke have a high risk of developing stroke in the future. This is because the nicotine content in your body increases your blood pressure level. Whereas smoking a cigarette for longer duration causes a fatty buildup in the main artery of the neck. Also, it makes your blood thicker over time which is more likely to cause clot formation resulting in high stroke risk. In this context, even secondhand smoke can too impact your health making you likely to have a stroke in the future.

People with diabetes health conditions often suffer from other health issues such as high blood pressure and overweight which all together create an environment for having a stroke risk. This happens because diabetes damages the blood vessels over time that leads to stroke risk. Under the condition where your blood sugar levels remain high and you get a stroke the damaging level to the brain remains severe.

People who are obese or overweight their risk of having a stroke remain quite high than those who maintain healthy body weight. However, this risk can be reduced by practicing a good exercise routine every day and by strengthening muscles.

Anyone having a family history of stroke contains a greater risk of having a stroke with comparison to those who do not have any past history in their families. In such cases most often health issues like high blood pressure and diabetes health condition run in families which are two primary contributing factors for stroke risk. In some cases, strokes occur as a result of a genetic disorder that blocks the blood supply to the brain leading to stroke incidents occurs.

The gender of a person too increases their risk of stroke. For example, women are less likely to have a stroke than the men of same age. However, women have a stroke at very later stages of their life at a severe level which reduces their chances of recovery and makes them more likely to die.

Though anyone can have a stroke at any point in time of their lives even in a very early childhood stage, however with increased age like when you enter your 50 or 55 of age your risk increases by dual rate with every passing decade.

People belonging to certain race groups such as African-Americans and Nonwhite Hispanic Americans are more likely to have a stroke than any other racial group in the U.S. Sickle cell disease which is a health condition that narrows the arteries of the affected person and interrupts the blood flow to the brain are very common in these race groups as well as people belonging to the Middle East, the Mediterranean and Asia.

How to Prevent a Stroke?

About 50% of all stroke cases are preventable by controlling the risk factors on time before they get problematic and cause stroke incidents. Factors that can be controlled on time for preventing one’s risk of stroke includes-

Factors that are uncontrollable include-

A healthcare specialist can better evaluate a person’s risk of stroke and can guide accordingly how he or she can control their risk factors. In some cases, people experience warning signs of stroke also known as Transient Ischemic Attacks or TIA. In such cases, the affected person develops the symptoms for a short and brief period so it may remain unnoticeable. A regular visit to a doctor is important if anyone contains any of the risk factors that increase his or her likelihood of having a stroke.

The signs or symptoms of stroke include-

Depending upon the severity level of a stroke, like for how long the brain lacks blood flow and which area of the brain was affected, a person can develop temporary or permanent disabilities. Complications that may occur as a result of stroke incident includes-

Both ischemic and hemorrhagic strokes type need different types of treatment procedures as both of them occurs due to two different reasons and develop different effects on the body. As stroke is a medical emergency situation containing the death risk in the patient so to reduce the level of brain damages a very speedy diagnosis is required in its case.

As early as the diagnosis will be done a healthcare specialist can start a suitable treatment procedure depending upon the type of stroke. Treatment options that are generally used in both types of stroke cases are discussed below along with some rehabilitation tips that are effective in both the cases.

As the ischemic stroke occurs as a result of narrowed or blocked arteries so the target of its treatment remains to restore again the adequate level of blood flow to the brain. Initially, the patient is given drugs that can break the clots that have obstructed the flow of blood to the brain and ensure that no new clot would form.

In general, the doctor gives blood thinners such as Aspirin or inject Tissue Plasminogen Activator (TPA). The TPA is a very effective method of treatment as it dissolves clots very speedily but it requires to be given just within 4.5 hours of the stroke symptoms onset.

The emergency treatment move includes injecting TPA directly into a brain artery or usage of catheters for removing the clot physically. However, to evaluate the benefits of these emergency procedures research is ongoing.

There are other treatment options also available that a surgeon can apply in order to reduce the risk of stroke or TIAs. Angioplasty is one of the treatment options in which a surgeon inflates a small size balloon inside the affected narrowed artery through a catheter. After this, a stent or mesh tube is inserted into the opening. This helps in preventing the artery from narrowing again.

Carotid endarterectomy is another procedure that helps in reducing the risk of strokes or TIAs. In this procedure, the surgeon opens the carotid artery and removes the plaque which otherwise could break and travel to the brain causing a stroke.

Hemorrhagic stroke occurs as a result of leaking blood into the brain. So the aim of treatment remains to stop this bleeding and reduce the pressure on the brain. Medications are given to the patient that helps in reducing the pressure on the brain and controlling overall blood pressure. The focus remains to prevent the risk of seizures and sudden constriction of the blood vessels.

In case the affected patient is already taking blood-thinning anticoagulants or antiplatelet like Warfarin or Clopidogrel then they are given medications that have counter effects on the blood thinners. Some issues in the blood vessels can be repaired by the surgeons that either have caused or can cause hemorrhagic strokes in the future.

When a hemorrhagic stroke occurs as a result of an Aneurysm or a bulge in the blood vessel that can burst in this case a surgeon places small clamps at the base of the aneurysm or fill the space with detachable coils in order to stop the blood flow and to shrink the aneurysm.

The impact of a stroke is long-lasting in nature and a very severe one as it hampers the ability of a person to lead a normal lifestyle as he or she used to have before the stroke health incident. This impacts both the physical and emotional levels in a person’s life. In this regard with the incorporation of some effective rehabilitation therapies and support systems, can help in a successful recovery from the stroke.

Therapies and support systems that are popular and effective include speech therapy, physical therapy, occupational therapy, support groups, and most importantly a good support system from friends and family can do the miraculous job.

Remember the rehabilitation is not a one or two-week process instead it is an ongoing part of the stroke treatment. With proper support and assistance, a stroke affected person can again lead a normal, healthy, and quality lifestyle. However, how much duration will take to achieve this ultimate goal will depend on the severity of the symptoms of a stroke that a person has faced. Still one should not lose heart ad remain persistent with the rehabilitation measures along with taking the prescribed medications for a sure sort positive result.