Hot flashes are one of the common symptoms of the menopausal stage which is a period when the reproductive phase of a woman’s life remains in its transition phase or towards its end. So women always have a query that how long this menopausal symptom will last. Generally, the menopause-related hot flashes end after 6 to 24 months of the menopause. However, in certain cases, it lasts for 7 to 11 years or even more than that. If this is your concern then it is very crucial that you take the help of treatment for hot flashes after menopause.

Lots of hormonal changes take place in the body along with the end of menopause transition which causes to develop different unpleasant symptoms that last for a longer duration. Hot flashes and night sweats are also one of those symptoms that sometimes persist even after the completion of menopause stage.

It takes almost 10 and even more than 10 years for full completion of the menopausal stage or in more precise term it can be said it varies from one person to another that how long their menopausal transition period will continue.

A hot flash is one of those symptoms which indicate that you have already entered your menopause transition period. Though it is natural but its consistent existence can cause an immense amount of difficulties in leading your day to day life in a healthy way.

So it is necessary to take medical support especially if it persists even after the end of menopause. Hot flashes come with the sudden extreme sensation of heat in different body parts such as the face, head, and chest, followed by chills, perspiration, and flushing.

If hot flashes occur during nights especially while sleeping it can drench your whole cloth with sweat leading to difficulty in sleeping peacefully and in relaxed mode. Hot flashes that occur during the night time are called night sweats.

The sad reality about this menopausal transition’s symptom is that as earlier a woman develop this issue in their life they have to suffer by it for a very long duration that simply interrupts their daily life. The Study of Women’s Health Across the Nation (SWAN) says that the African American and Hispanic women are more prone to develop hot flashes issues in their menopausal transition and even after that, with a comparison to white and Asian women.

However, this study doesn’t interpret clearly the existence or influence of hot flushes in older postmenopausal women. Though this health issue can be resolved via estrogen, hormonal therapy but people are likely to face the more adverse effect of such treatments on their health in the long run.

Causes of Hot Flashes After Menopause

As per the research study of SWAN on younger perimenopausal, early postmenopausal and in lower amount older postmenopausal women, recognizes the below-mentioned reasons or causes responsible for the hot flashes health issue after the menopause stage.

It is found in researches over women who develop hot flashes or night sweats even after the completion of their menopausal stage that as early these symptoms starts it lasts longer. In more clear term if you develop your first hot flashes symptoms even a little bit before your menstrual period cessation time then on an average the hot flashes issue will persist for 9 to 10 years.

However, this duration can be reduced to a great extent if you develop the hot flashes symptom after your last menstrual period. In such cases, you will only have to suffer from this issue for three or four years.

As per the report published by SWAN, women with a special health condition or who have an unhealthy lifestyle in their current or former life are the ones who develop hot flashes health issue even after the completion of the menopause phase of their life.

For example, women who are a smoker or have alcohol addiction develops hot flashes for as long as 11 years even after the end of their menopausal stage. Similarly, women who are stressed anxious, depressed or overweight either in their present life or in their past life are more likely to face hot flashes issue for approx. more than the 11 years.

Also, it is found in this study that women of the special tribe are the greater victim of hot flashes concern after the menopause. For example, African American women develop more commonly the hot flashes issue for more than 11 years after their menopause. Whereas this duration is less than half for the Chinese and Japanese women who reportedly develop hot flashes for much lesser time than the former ones.

Women who undergo the hysterectomy are more prone to develop hot flashes symptoms even after the end of their menopausal stage. Though some researches correlate the hot flashes issue in these women with a perception that hysterectomy affects the ovaries blood vessels structure that leads to earlier ovarian failure leading to hot flashes.

However, this hypothesis doesn’t explain clearly why hot flashes issue persists for a longer duration in women who underwent a hysterectomy. Another report suggests that women who undergo hysterectomy due to dysfunctional uterine bleeding have the different hormonal or psychological condition than other women that makes them more prone to develop hot flashes.

Whereas women who undergone hysterectomy due to benign condition develops different symptoms and possibility exits that even though they develop hot flashes symptoms they are reluctant to report their symptoms to anyone.

Educational status of a woman also plays an important role in the severity of post-menopausal symptoms such as hot flashes as per the study report of SWAN. As per this research women with the higher educational background tend to follow a healthier lifestyle which reduces their risk of developing hot flashes symptoms after the end of their menopause for a very long duration.

This particularly happens because highly educated women are more conscious about their health and in order to improve it they indulge in healthy lifestyle habits such as exercising, healthy diet intake, etc which helps in reducing the intensity of menopausal symptoms as well as post-menopausal signs such as hot flashes.

Another report shows that women with lower socioeconomic status are more prone to develop hot flashes after menopause which again establish a relationship between lower educational status and hot flashes issue. This particularly happens because lower socioeconomic status increases the possibility for the growth of neurohormonal stress in the affected women leading to post-menopausal symptoms growth like hot flashes that persist for the longer duration.

Higher body mass index of a woman also plays a vital role in causing post-menopausal symptoms such as hot flashes. As per this report women who are overweight or have greater BMI value have higher estrogen hormone in their body which basically develops out of the adipocyte based aromatization estrone that leads to the conversion of androstenedione into estrone.

Similarly, a relationship was established based on this theory on younger menopausal women with high BMI rate that causes them earlier stage ovarian failure leading to hot flashes concern in their midlife.

The study of SWAN suggests that it is the higher level of serum FSH level in the body rather than the estradiol level which causes hot flashes concern in postmenopausal women in more severe form. The study determines the fact that even after adjusting the sex hormone and estradiol levels the effect of FSH levels remain as it is.

However, the severity of hot flashes can be relieved through nonestrogen feedback systems in women quite earlier stages of their life when they are far away from the menopause phase. This will really work because at this point the FSH levels in the body are either in decline or in a stabilized position.

The late-night awakening or arousal creates a favorable condition for night sweats or hot flashes issue that persists even after the end of the menopausal stage for a very long duration. Hence it can be said that the hot flashes share the symptoms of both menopause and sleeping trouble or sleeping disturbances. 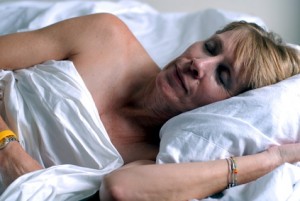 Women who develop post-menopausal hot flashes concern mostly have a very difficult life as they face an immense amount of difficulty in proceeding their day to day life responsibilities. The SWAN study report suggests that a large number of women are going through persistent hot flashes issue even in their postmenopausal years of life.

As per this study, all affected women should seek medical help instead of struggling with this situation by their own year by year. Also, the identification of the early stages of all the triggering or risk factors may help to reduce its severity and longevity to a great extent in the later stages of life.

One of the most popular as well as effective hot flashes treatment is the Estrogen Based Hormone Therapy which also known as hormone replacement treatment method. During the menopausal transition phase, there is substantial reduction occur in the production of hormones such as estrogen and progesterone leading to symptoms such as hot flashes develop.

So this hormone treatment therapy replaces the scarcity of those vital organs in the body to relieve all your menopausal and post-menopausal symptoms such as hot flashes. However, it is crucial to mention here that this kind of treatment is associated with certain health risks.

If the hormone therapy treatment runs for the longer duration it can cause breast cancer and in older ages women the high chances of stroke, blood clotting, heart attack, dementia and gall bladder disease increases.

Apart from hormonal therapy treatment, there are many non-hormonal medications are there which can also relieve the hot flashes issue in the postmenopausal stages of a woman’s life to a great extent. These medications include some generally prescribed medication for nerve pain, certain medication for high blood pressure issue and some kind of antidepressants medicines.

Whatever the medication you consume for relieving your hot flashes or night sweats issue it is always advised that to have these medications in their lowest possible dose and consume it for the shorter duration only to avoid their long term usage associated health risk or side effects risk.

Apart from these commonly prescribed treatments certain lifestyle changes also help a lot in relieving the post-menopausal hot flashes health issue to a great extent and in a much safer way. Certain exercises such as aerobic exercises, deep breathing especially at the point when the hot flashes attack appear help a lot to reduce its intensity.

Other lifestyle changes that can help you in relieving your post-menopausal hot flashes concern includes avoiding the intake of spicy foods, alcohol, caffeine, and other hot beverages intake, quit smoking, taking less stress and practicing meditation and mindfulness healthy habits to stay cool or calm internally as well as externally, helps a lot.

Taking a final decision regarding the treatment for hot flashes after menopause is a very crucial one. For ensuring to avail the appropriate treatment for you it is quite essential that you discuss every minute detail about your current and past health condition, family history or other necessary details that a doctor needs to know.

Whatever may be your ultimate treatment plan it is very important that you keep on visiting your healthcare provider to discuss your symptoms changes, progression rate with the doctor so that they can determine an accurate treatment plan for you.