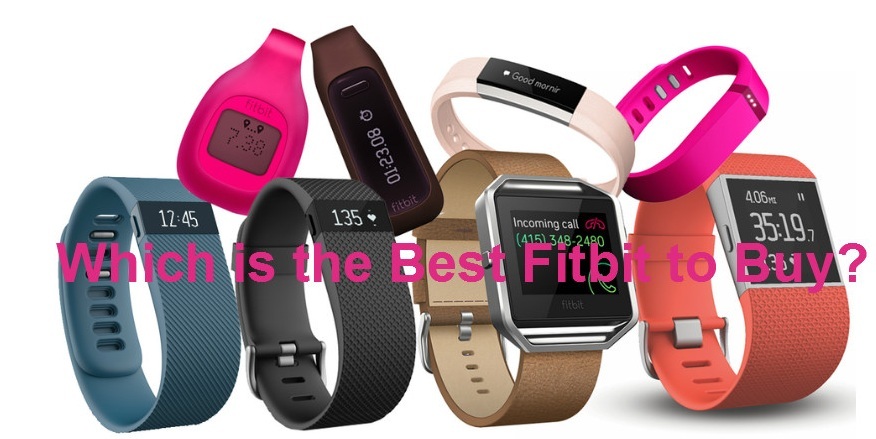 When it comes to choosing the best fitness tracker, Fitbit produces trackers for all types of lifestyles and fitness needs. When compared to other fitness trackers, Fitbit offers high-quality products with good specifications and all for a reasonable price.

If you are in the market to choose the best Fitbit activity tracker, it can be a challenge to know exactly which Fitbit fitness tracker is right for you.

This review on Fitbit fitness trackers looks at the various Fitbit trackers on the market to help you choose one is the perfect choice for you.

How to Choose the Best Fitbit

When looking to choose the best activity tracker from Fitbit, there are various factors determining which the best is for you. Of course, one factor will be the price. However, because there are many different type activity trackers, you also need to consider features like fitness tracker display, the size, battery life, and how you plan to use it.

Currently, there are 9 Fitbit activity trackers on the market; these are listed from the cheapest to the most expensive:

The first factor you probably want to take into account is the price. From the various Fitbit activity trackers, the cheapest one, the Fitbit Zip, costs around $60 and for this, you get a clip-on fitness tracker with the most basic features like step, calorie and distance counter together with a clock.

The Fitbit One and Fitbit Flex both cost $100, but the One offers better value for money because of its features, although this is a clip-on tracker, not a wristband. There is a $20 difference between the Charge and Charge HR. This is because the Charge HR features a heart rate monitor and a better strap.

The Alta costs around $130 and resembles a stylish wristband, not a watch. You can purchase interchangeable wristbands to match your style.

The Blaze and the Surge cost $200 and $250 respectively and are the most feature-laden of the Fitbit activity trackers. Both of them look like stylish watches and with the Blaze you also have the option of purchasing interchangeable straps.

All of the Fitbit activity trackers feature a steps, distance and calories counter along with recording your active minutes. Only the Flex doesn't feature a clock because it lacks a display.

The other fitness trackers all have a varying array of features. As you would expect, the more you are willing to pay, then the more features you can expect to have in your fitness tracker.

If you need a fitness tracker with vibration function for silent alarms, then the One, Charge, Charge HR, Alta, Flex, Blaze, and Surge all have this feature.

If you need your fitness tracker to count the number of stairs climbed, then the One, Charge, Charge HR, Blaze, and Surge all have an altimeter.

The 3 most expensive trackers, the Charge HR, Blaze, and Surge all boast a heart rate monitor which uses Fitbit's PurePulse technology to measure heart rate from your pulse.

Fitbit's Blaze and Surge have the most features with functions like multi-sport tracking, text display for text messages, music control. However, the Alta and Charge HR have almost as many features, and they also include Caller ID and auto exercise recognition. This means that the fitness tracker will automatically recognize the type of sport you are doing – football, aerobics, running, kickboxing, cycling, etc.

The Fitbit Alta has a cool feature of prompting you to do small short exercises to help you meet your fitness targets.

Each Fitbit fitness tracker has its own unique type of display. Here are the types of display that you get with each one:

Fitbit Zip. This has a monochrome small display which displays numbers and smileys as a collection of dots. It shows your steps, calories burned, and distance as well as a clock.

Fitbit One. The One has a long black display with white text. It shows records of your basic activities as well as a clock.

Fitbit Flex. This is the most minimalistic display – actually, it doesn't have a display but a series of small lights that light up to show progress. Each dot is 20% of your daily progress. Although you can't see your record of activities on the wristband, they can be seen on your smartphone app.

Fitbit Alta. This features a long vertical OLED tap display. It shows all your recent activities as well as a clock and caller ID.

Fitbit Charge and Charge HR. The display of the Charge is smaller than the Alta and shows all your activities like steps, distance, floors climbed, and active minutes. It also has an alarm and caller ID. The Charge HR also shows heart rate.

Fitbit Blaze. The Blaze features an amazing colorful bright touchscreen display and resembles a watch. It can display the time in digital and analog styles and has caller ID, text messages, heart rate and of course, all your other daily activities.

Fitbit Surge. This features a monochrome LCD display and does a great job of showing everything about your daily activities as well as caller ID, text messages, alarms, and heart rate.

The Best Fitbit. Measurements and Specs

The Fitbit One and Fitbit zip are both clip-on fitness trackers. This can be useful if you already wear a watch and don’t want to change it for your Fitbit tracker. However, it can be easy to leave the tracker clipped onto clothing and then forget to record your activities. The Fitbit Zip is the smallest tracker.

The Surge and Blaze both resemble watches and are the largest of the Fitbits. When you order the Surge you have to specify which size of strap you require. However, with the Blaze, you can also order adjustable straps in leather and metal.

The Fitbits all have varying lengths of battery life. This is mainly due to the display, the tracker's functions, and the size. So it is no surprise that the Zip has the longest battery life because it has the simplest display and the trackers with touchscreen displays have the shortest battery life.

Here is a rundown of what you can expect from the battery life of Fitbit activity trackers:

Fitbit Blaze and Fitbit Surge. Up to 5 days.

All of the Fitbit activity trackers are advertised as water resistant. Fitbit says that their devices are sweat, rain, and splash proof and that they are not recommended for swimming.

In online reviews, many users say that they have showered with their Fitbit on and even gone swimming with it and there were no problems. However, to make sure that your Fitbit tracker lasts a long time and functions properly, it is best to remove it before taking part in water activities.

All the Fitbits that are reviewed here connect to the Fitbit app, which can be installed on a desktop, Android, iPhone, or Windows smartphone.

The apps are visually appealing and show all your physical activities in the way of graphs and charts. This can be a real motivator if you have specific fitness goals.

The amazing Fitbit apps are one feature which sets all Fitbits apart from the competition when it comes to fitness trackers.

The Best Fitbit for You

All Fitbits come in a wide array of colors and designs.

If price is an issue and you are just looking to record basic fitness activities then the Fitbit Zip is a good choice. However, from the lower price range, it is better to opt for the Fitbit One because it has the best array of features for a cheaper price.

However, if price isn't an issue then the Fitbit Surge is a fantastic choice. For the price, you get a top of the range activity tracker which does everything you need from a fitness tracker.

If you want the option of changing straps, for example, a stylish leather or metal strap for the office then a nice colorful plastic strap for the gym, then the Fitbit Blaze is the best choice.

In terms of value for money and features on an activity, Fitbit certainly leads the market. Fitbit has produced fitness trackers for almost anyone's taste and any level of activity.