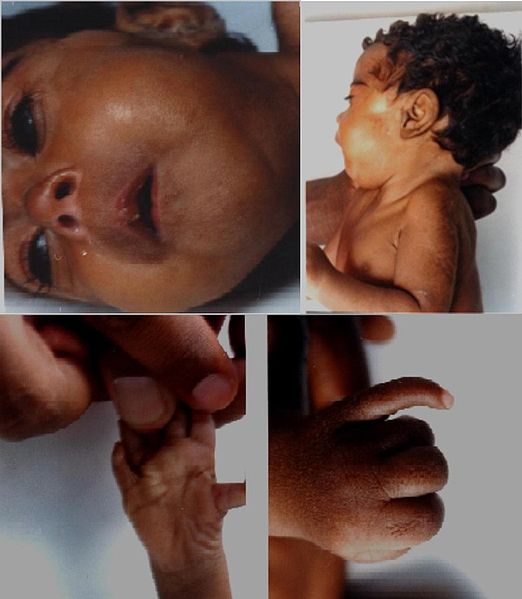 The Cornelia de Lange syndrome refers to a congenital developmental disorder present from birth. It affects different areas of the body and varies in intensity from mild to severe. Many of the symptoms and signs can be detected at birth or soon after this. Not every symptom has to be manifested for the diagnosis to be made. Those with Cornelia de Lange syndrome resemble each other and share certain specific features such as:

History of the Disorder

In the year 1933, a doctor by the name of Cornelia de Lange discovered this syndrome when she came across two children who were admitted to a hospital in a short span of time from each other. Dr. de Lange noted many common facial characteristics. She was able to discover a new syndrome hence named after the Dutch pediatrician.This disease is also sometimes called Brachmann de Lange Syndrome. Dr. W. Brachmann was also investigating this disease in 1916.

CdLS is characterized by the following symptoms:

Behavioral problems are common to those with this syndrome resembles autism, another condition which impacts communicability and interactivity. Additional symptoms of this syndrome include too much body hair (also called as hypertrichosis), an unusually small head (referred to as microcephaly) and hearing loss as well as problems with digestion.

Cleft palate is also common in people with this disorder, whereby they are born with an opening in the roof of the mouth. Some other common symptoms that accompany this disorder include heart defects, eye issues, and seizure.

Some of the common medical problems include:

Limb differences are also prevalent including missing limbs seen in close to a quarter of the persons with CdLS.

A large percentage of those with CdLS face intellectual impairment and delays ranging from moderate or mild to massive. Linguistic delays are also present as are learning disabilities. An intellectual impairment/learning delay is an important criterion for treatment and diagnosis. However, there have been those with Cordelia De Lange syndrome who have also scored from normal to borderline on intelligence scales.

A vast majority ( nearly 80-85 percent by some estimates) experience acid reflux. Pain that is part of Gastroesophageal Reflex Disease is associated with behavior and eating problems.

These include self-injury, hand biting, head banging and other forms of self-injury. Compulsive repetition and autism type behaviors are also common. OCD, ADHD, ADD, and anxiety have been diagnosed for people with CdLS as well and co-occur with this developmental disorder.

Small feet, as well as hands, are common in those with CdLS. Clinodactyly are incurved 5th fingers, the incomplete joining of the third along with the second toes, the proximal positioning of thumbs and abnormalities in the upper limb- this includes forearms, hands and fingers.

This includes the meeting of the eyebrows over the middle as well as a nose structured small and upturned. Eye problems such as eyelid inflammation or blepharitis and non-present tear ducts as well as ptosis and myopia are common. Hearing loss, delays in communication, difficulties in feeding, seizures, defects in the heart and sex organs as well as cutis marmorata ( a purple discoloring of skin) can also be other symptoms. Average head circumference measures around 48-50 cm.

Other classic signs and symptoms include underdeveloped orbital areas, long curly eyelashes, well-defined eyebrows, long philtrum and anteverted nares. A thin lip, rotated ears, depressed nasal bridge, micrognathia, widely spaced teeth and a high arched palate are some other signs. A short neck and perioral cyanosis are some other features along with umbilicus and hypoplastic nipples.

Severely affected patients may even experience scoliosis and hip displacement as well as atrial septal defects with lesions. Other manifestations include hypospadias, ophthalmologic problems and pigment rings in the peripapillary region might be noted as well.

Many cases of CdLS are sporadic. Transmitted in an autosomal dominant pattern, mildly affected parents can give birth to those with this developmental disorder. Twins have been reported to have a high concordance rate as well.

Essentially, mutations of a heterozygous nature in a gene named NIPBL have been implicated in this disorder. This is a gene associated with the Drosophila melanogaster gene (nipped-B). The exact function of the protein product of NIPBL remains unknown. Mutations in the genes and coding for proteins involved in the effective functioning of sister chromatid SMC3 and SMC1A (chromatids on the same chromosome) are noted in some patients.

Considered a cohesinopathy (resulting from defects in chromosome cohesion)with Roberts Syndrome, CdLS is a genetic disorder. Inheritance is an autosome dominant in families with certain mutations in SMC3 and NIPBL. It is an X-linked in those with SMCI1A mutations. Correlating nature and nurture, research suggests those with genetic mutations have a more severe phenotype

Mutations in several genes including RAD21 and HDAC8 are known to cause Cornelia de Lange Syndrome. Mutations in CdLS caused by mutations in SMC1A, SMC3 and HDAC8, are associated with severe defects while the syndrome is milder in those with the RAD21 mutation.

Individuals with CdLS have certain medical, social and educational needs require management and therapy. While each case progresses in a unique way, parents can expect slower physical and cognitive development in children with this disorder.

Children with CdLS may or may not have significant behavioral problems. Self-injurious behavior and head banging are more likely in those with this syndrome. Strong reactions to stimuli may persist once these are gone. Eating, sleeping, and emotional irregularities may also be noted. Being oppositional and hyperactive may require behavioral intervention. Lack of sense of pain or heightened sensitivity to touching indicates individuals may have neurological impairment. This may require the intervention of a specialist.

Persistent behavioral difficulties include hyperactivity not responsive to medication, poor impulse control, self-injury and serious emotional/behavioral problems should be tended to by a behavioral therapist with experience in the treatment of development disorders.

Studies indicate that congenital heart disease is higher in children with this disorder. Those suffering from this developmental disease may even have minor heart defects to the more severe ones. Dental problems such as crowded teeth eroded teeth caused by acid reflux, and periodontal disease also needs to be taken care of. Cleft palate repair might be needed.

Endoscopy, ENT examination, eye exam are just some of the many treatment methods open to diagnose the problems associated with this disease. Care may also be required for training and development of skills that promote adjustment. Linguistic training may be needed as there can be speech problems and hearing impairments.

Another important aspect is the treatment of acid reflux disease. If the patient cannot report the problem, he may display chronic pain through repetitive injurious behaviors or heightened irritability. Sandifer Syndrome may also accompany GERD in those with CdLS and require treatment. Formal assessment needs to be carried out including blood, stool tests, endoscopy, and x-rays.

A multi-pronged approach including medication may be required as the different manifestations associated with this disorder. Ultimately, the prognosis depends on the unique features of each case. Individual treatment may be planned keeping this in mind.

Cornelia de Lange Syndrome is a developmental disease which can have mild to severe symptoms. Having a genetic etiology, this disease can manifest itself even if parents have a mild version of the disease. Mutations in gene make this a congenital defect and treatments are entirely dependent on the symptoms emerging as time progresses.