Worldwide, 1 in every 8 deaths is caused by cancer. Despite the significant medical advances that we have made, cancer still remains one of the leading causes for death in the developed nations.

Prevention is always better than cure, and it applies to cancer as well. Reduce the risk of cancer by making certain lifestyle changes, especially in nutritional intake.

Relationship between cancer and nutrition

Here is a list of foods that have been proven to have anti-cancer properties. Try and include these in your daily diet to reduce cancer risk.

Garlic contains sulfur which helps stimulate the body’s immune system against cancer. The sulfur compounds cause the natural death of cancer cells. According to a study published in Cancer Prevention Research, eating raw garlic is helpful for prevention of lung cancer.

Cruciferous vegetables are high in nutrients such as Vitamin C, K and E, carotenoids and folate. They are also high in mineral content and are a great source of fiber. Crucifers are known to contain a set of substances called glucosinolates. These vegetables, when eaten and digested, result in the breakdown of glucosinolates to form various active compounds which are inhibitors of cancer initiation and development. Cruciferous vegetables such as cabbage, cauliflower, kale, horseradish, watercress etc. are effective in lowering the risk of breast, colorectal, prostate and lung cancer. Include them in your daily diet as additions to raw salads or smoothies.

Whole grains are those grains whose bran and endosperm are intact, as opposed refined grains which are polished to remove the bran and germ. According to epidemiologic studies, whole grains help protect against gastric, colon, breast and prostate cancer. Whole grains are high in fiber, antioxidants, lignans, phenols and saponins, which lower the risk of developing cancer. Brown rice, whole wheat pasta, wheat breads, kasha and tabouleh are all whole grain based food that you can include in your diet.

Lycopene is a carotenoid found in tomatoes and is responsible for the red color of the fruit. It is known to have chemopreventive properties against many cancers such as prostate, lung, liver, skin and breast cancer. Lycopene is especially effective in the reduction of prostate cancer risk. Tomatoes help protect the cells from damage while stimulating the immune system to check for cancerous cells. According to the American Institute of Cancer Research, lycopene inhibits the growth of tumorous cells by interfering with uncontrolled cell growth. In order to benefit the most from tomatoes, it is best to either eat them in cooked or processed. Their cancer fighting compounds become readily available when processed or cooked.

While everyone knows that carrots can brighten your eyes and lengthen your lashes, not many know that they are also effective against cancer risk. Carrots are full of alpha-carotene, which is responsible for inhibiting cancer growth especially in liver, skin and brain. It has been proven that consumption of alpha-carotene vegetables decreases the risk of lung cancer. Carrots make a great addition to raw salads. Carrot sticks and hummus dip can make a healthy snack to keep the munchies away. They also go well in smoothies or as juice. Consuming raw carrots is preferable, to make the most of its anti-cancer properties.

Flaxseeds and flax oil have been known to be anti-cancer since the 1950’s. Clinical trials have established that consumption of flax seed and its supplements help men inhibit the growth of prostate cancer. A study published in Gynecologic Oncology notes that ovarian cancer can be prevented by the intake of flax seeds, a rich source of Omega-3 fatty acids that decreases ovarian cancer risk. It is important to note that the oil is devoid of lignans which have significant anti-cancer properties. So flaxseed oil may not be as effective as the seeds. Flaxseeds are very healthy, but be warned of certain side effects such as diarrhea, nausea and bloat. If you are only beginning with flaxseeds, start with a very small amount at first.

Berries have always been known to possess anti-cancer properties. These colorful fruits contain a multitude of phytochemicals that fight cancer. Not just fresh berries, even freeze-dried berries are helpful in preventing cancer, as Medical College of Wisconsin studies have shown. Freeze-dried berries were found to inhibit the growth of colon and esophageal cancer in rats. Human studies have also shown that berries are extremely effective in reducing cancer risk and also inhibiting many genetic symptoms that may lead to the occurrence of cancer.

Tea prepared from the dried leaves of the plant Camellia Sinesis is known as green tea. Green tea contains a wealth of antioxidants which protect the cells and DNA from damage. Animal studies have shown the antioxidants to inhibit proliferation of tumor cell and also cause apoptosis. Another study showed that men suffering from prostate cancer experienced less inflammation of the prostate tissue when they consumed green tea regularly, as compared to those who didn’t drink green tea. Moderate intake of green tea is good for health; however, excessive drinking may lead to ineffectiveness of medications or supplements. 1or 2 cups of green tea every day is ideal. 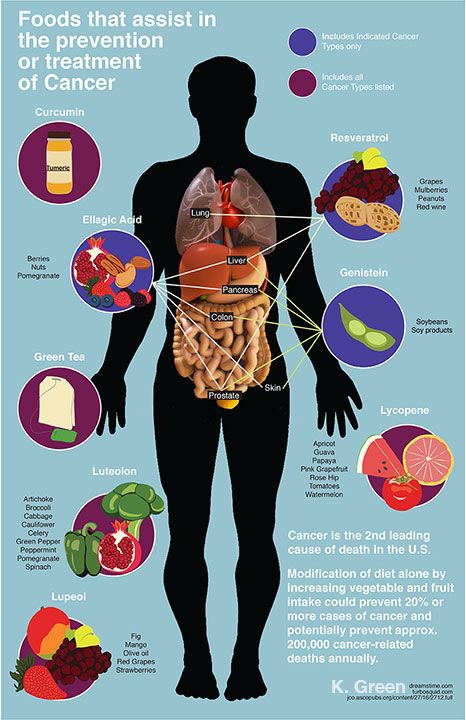 It is estimated that nearly 30 to 40 percent of all cancers can be prevented if active measures are taken in changing dietary habits. Less nutritious food, obesity, high intake of sugar and refined flour, less physical activity, alcohol consumption and tobacco use, all contribute to an unhealthy lifestyle that raises cancer risk.

Here are a few key dietary guidelines to help you fight cancer by eating healthy:

By regularly consuming a healthy diet, you can significantly cut down on your cancer risk.