Goiter is an enlargement of the thyroid gland, which is a butterfly shaped gland located at the base of the neck. In some cases, goiter is a minor and even temporary problem, but, even in minor cases, the goiter may become so large that it puts pressure on a food pipe or wind pipe and cause hoarseness, cough, and difficulty breathing or swallowing.  In more serious cases goiter may be a symptom of a disease or condition that may require treatment.

There are 4 main types of goiter, simple goiter, toxic goiter, congenital goiter, and thyroid cancer.  “Simple goiter” is a non-cancerous swelling of the thyroid this swelling is caused by either an iodine deficiency (“endemic goiter”) or as a reaction to medication (“sporadic goiter”).  “Toxic goiter” is caused by overproduction or underproduction of hormones secreted by the gland.  “Congenital goiter” is a birth-defect passed from mother to child through the placenta.  Goiter can also be a symptom of “thyroid cancer”.

Goiter is usually a symptom of another medical issue.  There are several known causes of goiter, including the following:

Some factors increase a person’s risk of developing goiter. Women, for instance, are more likely to develop the problem simply because they are more prone to thyroid disorders and because the hormonal changes associated with pregnancy and menopause are unique to their gender. Those with a family history of goiter, those who are older (over 40), those who have taken certain medications (such as lithium or aminoglutethimide), and those who have been exposed to large amounts of radiation are also more likely to have goiter. 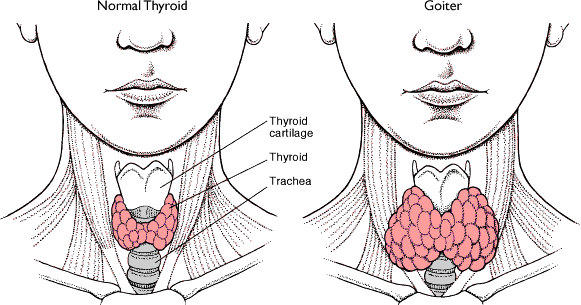 The main symptom of goiter is the enlarged gland itself, which – depending on its size – might or might not be easily detectable in the neck. If the gland is large enough to be noticeable, symptoms such as difficulty swallowing, coughing, a tight feeling in the neck, or breathing issues may occur.  If the goiter is large and causes swelling of the veins in the neck it may cause a person to feel dizzy when they raise their arms above their head.

In cases where hormonal imbalances are to blame, additional symptoms may also be present. Hyperthyroidism tends to be accompanied by increased heart rate, increased appetite, weight loss, diarrhea, and nausea or vomiting. Hypothyroidism is often accompanied by fatigue, lethargy, weight gain, constipation, and menstrual irregularities.

There are several tests that can diagnose the causes of goiter.  In many cases a doctor will be able to notice enlargement of the thyroid gland by applying pressure to a person’s neck while they swallow, if the doctor detects swelling or the presence of nodules they may do further investigation through blood tests, ultrasonography, a thyroid scan, or a biopsy.

Ultrasonography gives the doctor a look inside the body, where they can examine the thyroid in greater detail and identify any nodules (growths on the thyroid).

A thyroid scan uses a radioactive isotope injected into the body to produce detailed images of the thyroid on a computer screen.  A thyroid scan provides more information about the shape and size of the goiter than ultrasonography.

A biopsy uses a needle to extract tissue and fluids from the thyroid to be sent out for further testing.

Treatment for goiter depends on the cause and the severity of the problem. In cases where the goiter is small, other symptoms are minimal or absent, and the underlying issue is not a concern, the only treatment needed is continued monitoring.

For hormonal imbalances, medications are usually prescribed. These drugs help reduce or increase the activity of the thyroid, thereby reducing the size of the goiter. Medication, usually aspirin or a corticosteroid, can also help with general inflammation of the gland.

If the thyroid is large and uncomfortable, surgery (a “thyroidectomy”) may be needed to remove part or all of the gland – even if the cause is benign nodules. In the case of thyroid cancer, the thyroid will be removed and the patient may be required to undergo radiation and chemotherapy.

Radioactive Iodine is sometimes used to treat overactive thyroid.  The treatment attacks thyroid cells which will reduce the size of the goiter, but in most cases it also results in the need for the use of synthetic hormones.

Lastly, the use of iodized salt can correct the problem if iodine deficiency is the cause of the problem. Other sources of iodine in the diet include fish, shellfish, and seaweed, as well as fruits and vegetables grown in coastal areas.