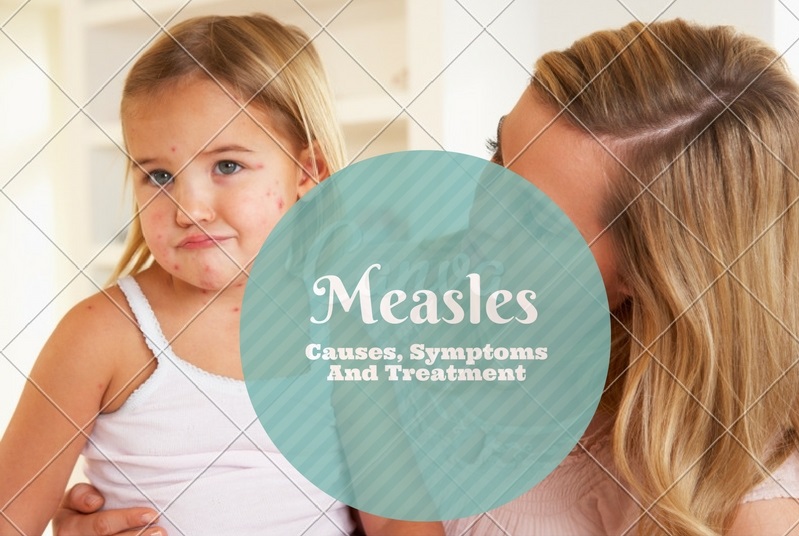 Measles/rubella is a viral infection. It is a disease of the respiratory system, and it can spread through contact with contagious and infected mucus and saliva. A person suffering from infection can release the contagion into the air while coughing or sneezing. The measles virus survives in air for many hours. Those who therefore come in proximity with this particle entering the air and settling on surfaces can be infected.

Another cause of measles is drinking or eating from shared utensils. This disease is a leading cause of death for those aged under 5, according to the WHO study carried out in 2014. You need to contract a doctor if measles is suspected. If you are not vaccinated against measles, and you come into contact with an infected person, visit the doctor to receive a measles vaccine within 3 days of contact to ward off infections. The infection can also be prevented by taking an immunoglobin within six days of contact with a person who transmitted the disease.

Measles also called rubeola or morbilli is a contagious disease associated with an outbreak resulting from the rubella virus. Measles is a common disease present in the world, and most people are developing resistance. But if measles infects a region where people have not developed resistance or undergone an outbreak of the disease, the results can be dangerous.

This disease has symptoms such as fever along with one of three symptoms- conjunctivitis, coughing, and coryza. These symptoms surface around ten days following the infection. The symptoms include reddish-brown spots like rash called the measles rash.

Other symptoms of measles include coryza(running-nose), dry cough, swollen eyelids and inflamed eyes or conjunctivitis and water filled eyes and excessive light sensitivity. Apart from photophobia, other symptoms include sneezing and fever. Koplik’s spots, which are gray-white spots with blue-white centers located in the mouth, cheek’s interior region and throat also occur. Aches and pains are felt in the body.

This rash occurs three to four days after beginning symptoms. It is a red-brown spot covered rash which can be there for more than 7 days. After infecting the ears, head, and neck, it spread to the lower ends of the body. As the spots grow in size, they join together.

In case you think it could be measles or symptoms do worsen, and the fever goes above 100 degrees F, you need to consult a doctor. Another point where the diagnosis needs to be made is if the fever has ended, but the symptoms have continued.

Measles is the result of an infection with rubella virus. This is a paramyxovirus-genus. This genus is known as Morbillivirus. This specific viral strain is found in the mucus of the nasal passage and the inner throat of an infected adult or child. The infected patient becomes contagious during the period of 4 days after the rash has appeared and continued for 4-5 hours after that.

One can become infected through physical contact with a person who has this disease. Coming into contact with the infected person’s cough or sneeze can also lead to contraction of measles.

Another way to get measles is to touch the surface that has been infected with mucus droplets and the virus remains active for 2 hours. Placing the fingers in contact with the mouth, eyes or nose can then transfer the infection to your body.

As soon as the virus enters the body, it multiplies in the back of the throat, lungs, and the lymph node systems. It then infects the urinary tract, blood vessels, eyes, and CNS.

Medical scientists have held it takes one to three weeks for the virus to become potent. But the symptoms are visible 10 days following the infection. Persons who have had measles once may not contract it again; cases of second-time infection are uncommon.

Those who have never infected and are not vaccinated stand the risk of getting the disease if they come into contact with the infected person or objects and items he/she has touched. Close to 90 percent of the people in the same living space with a contagious person having no immunity, can contract measles.

Physicians and GPs can quickly diagnose measles if the signs and symptoms can be observed. In case this is not possible, a blood test will confirm the presence of the rubella viral strain. In many countries, measles outbreak must be notified to the authorities, if doctors detect cases. If the patient is a child, the school must be notified as well.

There is no standard treatment for measles. If there are more complications, then medical care may be required.

If there are no complications, plenty of rest and normal measures will be there to control fever and prevent dehydrating. Drink plenty of fluids and rest and symptoms will go away in 10 days or a week.

If the temperature is high, you need to bring it down using a cold compress. Other medical interventions include ibuprofen and Tylenol (paracetamol and acetaminophen). Children below the age of 16 are not given these medications.

Another important preventative measure for preventing further complication of the disease is not letting anyone near a child/adult with measles. Patients should also be shielded from light as they develop photophobia. Other treatment options include drinking enough fluids to keep coughing and dehydration at bay.

Isolation is another important requirement during treatment. Those infected should be separated from those who are not vaccinated and have never developed the disease before. Studies also show that Vitamin A supplements help to prevent complications caused by measles.

Relieving symptoms require a slew of interventions, though vaccination is available to prevent this disease and it is recommended. Prevention also involves keeping the immunity strong and preventing contact with the infected person.

Treatment is basically oriented towards keeping the fever low and ensuring that the patient stays hydrated. Apart from fluids, you need to ensure that the usual precautions are taken with respect to communicable diseases.