What is a Pilonidal abscess?

A Pilonidal abscess is a lesion located at the bottom of the tailbone region. (See Figure 1) A cyst forms and filled with pus and fluid turning into a boil. They are more common in men than in women and tend to occur primarily between the years of puberty to the 30’s. This condition tends to be more common in white males than any other race due to genetics and affects at least 1.1% of the population.

In the crease of the buttocks, there is a “sinus tract” (See Figure 2) that is an open channel just under the top layer of the skin. This tract is located near the anus and contains hair and hair follicles. During extended periods of sitting, the tract can become occluded and form the cyst. This condition was given the name “jeep disease” because military drivers that drove jeeps were the most commonly affected. 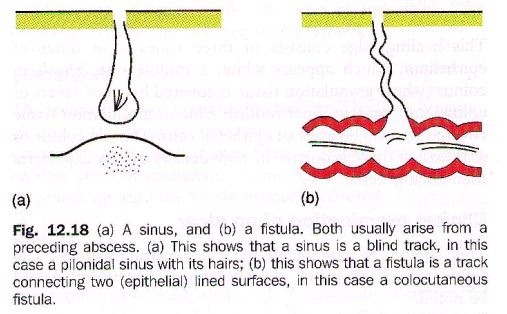 This condition can re-occur after treatment and be an ongoing condition if not fully treated or due to lack of proper hygiene to the area. The infections can become so severe that they require hospitalization on IV antibiotics for up to two weeks to bring the infection under control.

What causes a Pilonidal abscess?

There are a number of factors that can cause a Pilonidal abscess. Being overweight, excessive periods of sitting and hygiene are all factors in the occurrence of these lesions. Genetics and the way the area in the crease of the buttocks is formed is also a factor.

Researchers believe that Pilonidal abscesses begin in the actual hair follicles (See Figure 3) in the area. The hairs grow in instead of out. The ingrown hair becomes irritated and an infection develops causing a pus filled cyst in the area. When the cyst breaks open, it becomes an open lesion or abscess. This can further become infected because it is now openly exposed to dirt and debris.

The exact causes have not been completely revealed, but it is clear that rubbing and friction are directly related to the development. There are also isolated cases of people who work with hair getting Pilonidal abscesses in the creases of the fingers.

What are the symptoms of a Pilonidal abscess?

The symptoms of a Pilonidal abscess are similar to pressure ulcers common to the same area. This includes; pain in the tailbone region, a swollen cyst like protrusion, drainage or a reddened blister. Drainage may have a foul odor and be yellow or brown in color. A severely infected abscess may cause a fever in some people. Fever is a sign that the abscess may need emergency treatment to prevent the spread of the infection to other areas of the body or the bloodstream. The area may also feel warm to the touch.

What is the treatment for a Pilonidal abscess?

If the lesion is truly a Pilonidal abscess, the treatment is usually antibiotics that target the skin. In order to do this; antibiotics need to be broad spectrum and given for lengthy periods of time. Pressure ulcers often do not require antibiotics, so this is why a trained professional needs to evaluate the lesions.

If antibiotics do not clear the abscess, then surgical drainage and extended wound care may be required. The doctor will cut the lesion open and allow it to drain under a local anesthetic. (See Figure 4) It will then be packed with gauze packing that needs to be changed daily or even more than once a day. Patients are usually taught to do their own dressing changes at home. 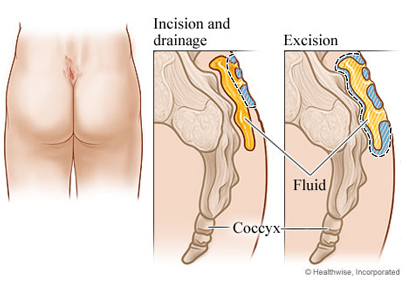 Advanced surgery includes removing all of the hair follicles from the area along with the cyst under general anesthesia. If the abscess was advanced enough parts of the tailbone and surrounding tissue is also removed. The wound is then stitched closed and the patient will remain in the hospital on IV antibiotics to clear the remaining infection. Very advanced lesions may require a special wound vacuum to be hooked up in the area to help pull drainage and assist the growth of new tissue.

Sitz baths and warm compresses can also help to open up a cyst and assist it to drain. Patients are also instructed to keep the area very clean and dry. It is also helpful to lose weight and refrain from restrictive clothing to the area.

The key to keeping a Pilonidal abscess from becoming severe is to seek prompt evaluation and treatment as soon as symptoms appear. Leaving an abscess untreated can cause the bacteria to enter the bloodstream and result in sepsis (blood infection).

The outcome of a Pilonidal abscess can be positive if all instructions for care are followed. They may clear and never return. But, if instructions to prevent them are not taken to heart then the abscess may return again several times. Because of the area involved, antibiotics and cleanliness are first priority in the healing process. Then steps need to be taken to reduce friction and pressure on the tailbone region.

Prevention can always reduce the incidence of a Pilonidal abscess and reduce the severity of infection if one does develop.