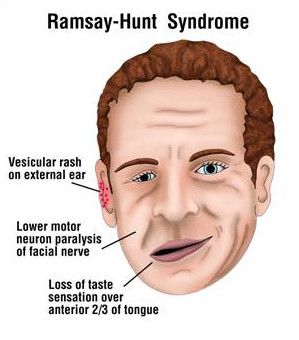 What do you know about Ramsay Hunt syndrome? Unless you have a medical background or know of someone who has the disorder, you most likely do not have any idea about it. This article will introduce you to the symptoms of this medical condition, as well as the causes, risk factors, and preventive measures you can take to avoid the disease.

The virus that causes the Ramsay Hunt syndrome, varicella-zoster virus, is similar to the virus that causes chickenpox. In fact, the syndrome may first begin as chickenpox—the only difference is the portion of the body that the virus hits. The virus may have been lying dormant years after when you have had chickenpox. However, the virus may reactivate in time. With Ramsay Hunt syndrome, the chickenpox virus does not only affect the skin but also affects the facial nerve.

Symptoms of the Syndrome 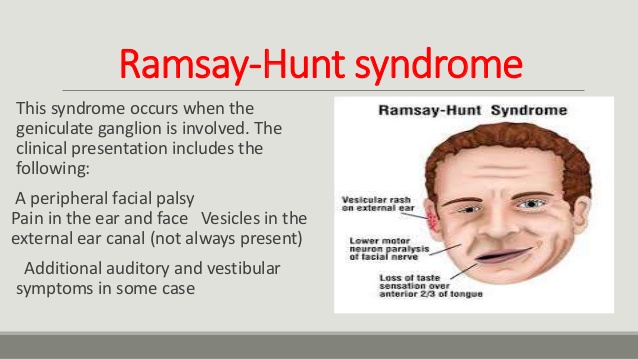 Several symptoms can indicate that a patient has the syndrome. However, medical experts agree that there are two major indicators that make the symptoms of Ramsay Hunt syndrome distinct from other diseases.

Other indicators of Ramsay Hunt syndrome includes tinnitus—a medical condition where the patient hears a ringing in his/her ear. The symptoms of the syndrome also include hearing loss in the ear which contains the rash, consistent ear pain and a difficulty in shutting one eye. Other symptoms of the syndrome involve an unexplainable change in taste perception, as well as sudden vertigo.

Should You See a Doctor?

If you have noticed the two main indicators of the Ramsay Hunt syndrome present in you, then you need a medical professional’s advice for you to know how to best address your health condition. As soon as you feel a sudden facial weakness, as well as notice that there is a rash on your face, you need to seek medical help as early as possible.

Research proves that the individuals, who seek immediate medical attention to check on the seeming symptoms of Ramsay Hut syndrome, are most likely to avoid long-term complications of the disease. As much as possible, do not let more than a week pass by before asking your doctor to address the problem to avoid having to experience long-term complications. 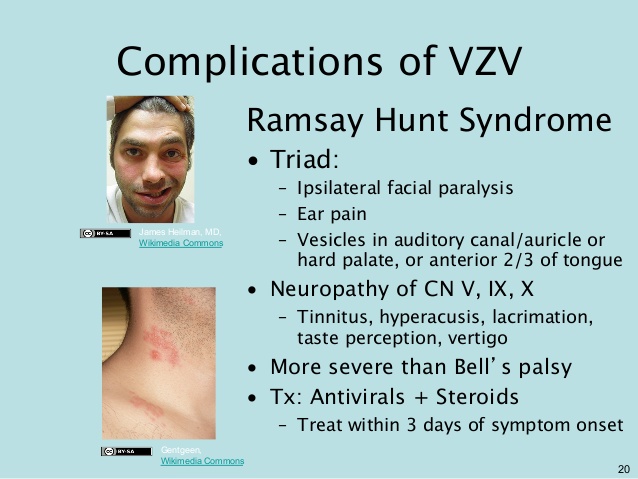 Medical complications can arise when a patient who has Ramsay Hunt syndrome does not do anything to treat the problem. The list below shows various complications that can occur in the event that a patient ignores the manifestations of the syndrome.

The initial symptom of the syndrome that involves facial paralysis and hearing loss may become permanent if the patient does not take the necessary steps to address the medical condition.

As the preceding paragraphs have explained, the virus that causes the Ramsay Hunt syndrome targets an individual’s facial nerves. The viral infection in the patient’s nerve may cause confusion in the signals that the nerves send to the brain, causing the patient to experience pain even after the symptoms of the syndrome disappear.

Who are at Risk?

If you are the person who is suffering from a chickenpox outbreak, here is a word of caution. Until the blisters in your body dry and peel off, please make sure that you avoid all sorts of physical contact with people who have never had chickenpox yet, as well as those with weak immunity. Also, in the interest of safety, it is important that you stay away from pregnant women so that you do not infect them with the virus you have.

First, take steps to ensure that your immunity against chickenpox is strong. If you have not had a medical professional vaccinate you for chickenpox yet, then you should see your doctor as soon as you can. Also, strengthen your immunity by loading up your diet with antioxidants that can help your body fight against harmful free radicals. You may want to supplement your diet with organic sources of antioxidants such as Klamath Blue Green Algae extracts upon the recommendation of a healthcare professional. Another way to increase your body’s antioxidant level is by eating a lot of fruits and vegetables—particularly dark-colored ones as these contain the highest level of antioxidants.

Second, do not delay seeing your medical provider as soon as you note that you are experiencing some of the symptoms of the Ramsay Hunt syndrome. Keep in mind that timely medical intervention can help prevent long-term health complications.