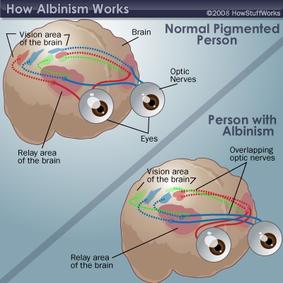 The Pale blonde hair and thick glasses didn’t appear very unusual, yet there was something why this three-year-old girl was unlike the fifty other kids sharing the room. Just like one in every 20,000 people worldwide, the kid suffered from a rare genetic condition known as Albinism.

Usually inherited as an autosomal recessive condition, albinism or hypopigmentation is caused as a result of a partial or complete deficiency of the enzyme tyrosinase in the body. The defect hampers the production of Melanin, the color pigment, which is why the sufferer shows visual aberrations such as lighter than normal hair, pale skin and unusual iris color.

Generally, albinism occurs as an autosomal recessive trait when a child receives a defective gene from both the parents. Due to the mutation in the genes, the body stops creating melanin, critical for the color of the skin, hair, and eyes. In the cases where both the parents are the carriers of the Albinism gene, there are 25% chances that the child the mother is bearing would be in the grips of Albinism.

There is also an exceptional case where the child inherits the condition from its mother. In the case of X-Linked inheritance, the mother is the carrier of the albinism gene, and the defect is passed on to her son when she conceives. It is said, if the mother is carrying the gene in such cases, there are 50% chances that the male infant would be diagnosed with the malady.

How To Know It’s Albinism?

Diagnosing Albinism is a very challenging task, however, the most effective way of studying the malfunctioning of the albinism related genes is by conducting a gene test. Along with that, one could also refer an ophthalmologist for VEPs (Visual Evoked Potential tests) to study the misrouting of the optical nerves or, go for less accurate & old methods like Hair Bulb Testing to reveal associated problems.

OA is found less commonly compared to the other types of Albinism, and just affects the color of the eyes. The hypopigmentation stays limited to the retina, while the skin tone appears normal or slightly fairer than that of the other family members. The condition is further divided into two sets depending upon the process of gene mutation. Autosomal Recessive OA could be found equally in both males and females while the X-linked inheritance is the commonly seen form of OA and is found only in males due to the mutation in gene X. In the case of X-Linked OA, the mother is the carrier of the Albinism gene and the traits are passed to the male child by the mother.

The condition results in the lack of pigmentation in the hair, eyes and skin of the sufferer. OCA follows an autosomal form of inheritance, which means mother and father both have to be the carriers of the albinism gene. Since years, researchers have used different ways to classify OCA, depending upon the level of pigmentation ranging from complete absence to the partial presence of melanin. On the basis of the recent genetic study, Oculocutaneous Albinism is classified primarily into three types: OCA1 OCA2, and OCA3.

Patients with OCA1a have no pigment in their eyes, skin, and hair due to the mutation on chromosome 11, in tyrosinase gene. The body produces no melanin due to the inactiveness of the enzyme tyrosinase. The condition doesn’t differ with time or race; though the iris may turn bluish-grey or the hair become denser with a pale white or yellowish tint over the course of time. The visual sharpness is extremely poor with no scope of improvement with age.

Unlike the OCA1a, the tyrosinase in this case isn’t completely inactive and the level of pigmentation varies in the first or the second decade of the age. The skin of the patients stays prone to sunburns or tan, and the visual acuity is poor with scope of improvement in future. OCA1b is further subdivided into two types of disorders, namely “temperature- sensitive OCA”, where the enzyme produced due to mutation of tyrosinase gene does not work on areas with central body temperature, and “Minimal Pigment OCA” where the body contains no pigment at birth, though an increase in the iris pigment is generally seen over first decade.

OCA2 is said to be the most common form of albinism around the world and is caused due to a mutation in the chromosome 15.The mutation obstructs the production of the P protein and is commonly seen in the people of the African descent. The lack of P protein hampers the production of Melanin, but still the pigment isn’t completely absent from the body. There are chances that the pigment might develop in the exposure of sun with no possibility of skin tanning in future.

The type 3 OCA is caused due to an autosomal recessive mutation in the chromosome 9 and is also known as brown OCA due to its wide prevalence in the Afro-Caribbean population. Most of the features aren’t indistinguishable to that of Ocular Albinism. In the case of OCA3there are chances that skin may tan if exposed to sunlight.

HPS is a rare type of Albinism which occurs due to a platelet defect. Along with the albinism, HPS is also associated with the unusual bleeding, bruising, and severe lung & intestinal diseases. The patients are generally recommended to keep off aspirin-like medicines, as they may turn a mild problem into a severe bleeding disease.

Chediak-Higashi is another uncommon form of Albinism that reduces body’s immunity to fight with infections, due to the defect in some of the white blood cells.

Just like the Chediak-Higashi Syndrome, Griscelli Syndrome involves hypopigmentation along with immunodeficiency and also some of the associated neurological problems.

In many cases, the hair and the skin color of the person is close to normal, but all kind of albinism bring along vision problems, caused due to the abnormal development of the eyes in the absence of melanin. The complete absence or decline of the pigment in the sufferers may cause:

Blonde Fundus is a condition when the retina is less pigmented than normal due to deficiency of melanin.

Refractive error in the sufferers of albinism is a common visual disorder. People usually have myopia or far-sightedness along with the touch of astigmatism.

The optic misrouting in the patients is caused due to the misrouting of the optic nerve, due to which the signals from retina reaches the brain from an abnormal path.

Nystagmus is commonly found in most of the albinism patients. The condition leads to involuntary rhythmic movement of the patient’s eyes.

The Foveal Hypoplasia occurs as a result of the improper development of the inner retina due to the lack of color pigment.

The people with the condition often feel twitchiness in the eyes when exposing to bright luminosity. The visual sharpness of the patients is decreased due to the scattering of light inside the eyes. 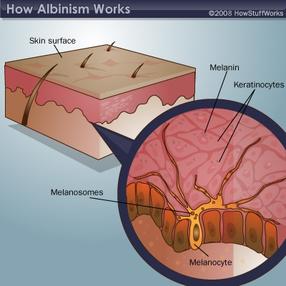 Most PWAs (People with Albinism) have fair and sensitive skin, which is why doctors recommend opaque clothing, and additional skin care with sunscreens rated 20 SPF while going out in the sun. In the tropical countries, where there are no adequate measures available for skin care, people stay prone to dangerous skin diseases and intimidating skin cancers.

People diagnosed with Albinism generally lead a normal life, except in special cases of Hermansky-Pudlak Syndrome where the lifespan of the individuals gets affected due to associated medical problems.

So what, if the Albinism fighters are sensitive of the glare, they still deserve to see everything just like any other human being in the full light. Various optical aids like contacts, bi-optics, tinted sunglasses & contact lenses are recommended by the doctors and used widely by the patients all over the world.

Surgery in case of strabismus could be done to improve the appearance of the eyes, though the surgery does not mend the misrouting of the optical nerves. Along with that, there are also surgical interventions available to cure nystagmus and one could also take the help of a surgery to improve the vision in the case of esotropia or crossed eyes.

The skin of the patients is sensitive and more prone to damage, therefore, doctors suggest the patients to take additional care of their skin by applying suns screen regularly, along with using sun protective clothing and hats.

Albinism is not a disease; the sufferers mostly lead a common life, but sometimes get caught in the state of isolation and denial. While some of the psychologists are working hard to make sure that every parent is aware of the characteristics & effects of the condition, the others are putting all the efforts to minimize the risk of social isolation of the patients on the basis of their color. In this quest, family and school can play a major role being central to anybody’s life, and make the world a little better for each and every fighter of Albinism.