Vaginal odor refers to any abnormal odor originating from the vaginal area. The odor is typically described as a “fishy” smell. Aside from a noticeable odor, symptoms may include an unusual vaginal discharge, itching and irritation. Vaginal odor can be a personal annoyance and an embarrassment in certain social and intimate settings. Understanding the causes of such odors can make it easier to determine when medical attention is necessary and when other remedies are likely to be effective.

Some vaginal odor is normal. It becomes an issue when normally occurring bacteria become overly active. This overgrowth, termed bacterial vaginosis, is the most common cause of vaginal odor. Some sexually transmitted diseases may also result in vaginal odor. While food doesn’t directly cause strong vaginal odors, certain foods may slightly affect the scent of vaginal secretions. A noticeable odor, however, is not likely from diet alone. While some odors disappear naturally, persistent odors generally require medical attention. Additional causes may include:

In some cases, the cause of vaginal odor is more uncommon. If recommended treatments aren’t effective, it’s important to seek medical attention to determine the true cause of the condition. The actual cause of vaginal odor may be a more serious condition that needs to be treated first. For instance, an abnormal opening between the rectum and vagina may cause feces to leak into the vagina, resulting in a noticeable odor. Some other less common causes of vaginal odor include: 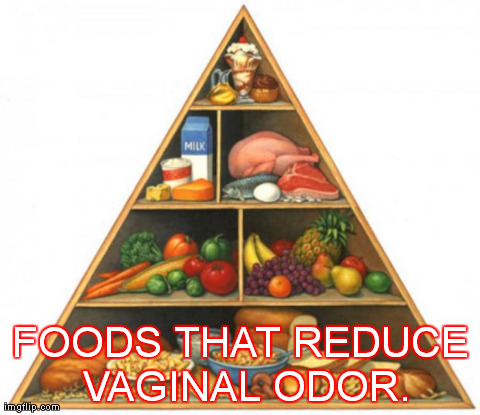 If vaginal odor appears only occasionally, there are certain steps that can be taken to minimize the odor. You don’t want to simply mask the odor, since this doesn’t nothing to eliminate the actual odor. Start by using mild, unscented soap to wash the genital area when taking a bath or shower. It’s normal to have some bacteria in a healthy vagina, so douching isn’t always necessary. In fact, excessive douching can upset the normal acidity of the vagina. Some natural ways to minimize vaginal odor include:

When to See a Doctor

A change in discharge is usually the first sign of a problem. Certain changes in vaginal odor may be related to a woman’s menstrual cycle, sexual activity, birth control methods, the onset of menopause, pregnancy and the natural aging process. A change in diet or drinking more water may be helpful, but not if the there is another underlying cause of the offensive scent. Generally, a doctor should be consulted when the following signs and symptoms occur:

Treatment of vaginal odor depends on the cause of the problem, the severity of symptoms and a woman’s overall health. Factors such as age and any medications being taken are also considered when narrowing down effective treatments. Since some of the symptoms associated with vaginal odor could be signs of other more serious conditions, a blood test and medical examination is often necessary to determine if another condition is causing the odor. A doctor typically checks for STDs and other possible medical causes of vaginal odor such as a yeast infection or cervical cancer. If these sources are eliminated, recommendations are typically made for certain vaginal cleanses and general hygiene methods.

• Cotton panties – Wearing cotton panties allows the genital area to breathe, which reduces the odds of infection. Wearing panties during the day only can further increased circulation and the risk of minor irritations that may cause odors.

• Avoid sexual intercourse during treatments – Sexual intercourse should be avoided if medical treatments such as medications are prescribed to clear up an infection. Petroleum jelly or oils should not be used as lubricants since they provide an environment conducive to bacteria growth.

• Avoid tight-fitting clothes for long periods of time – Tight fitting clothing can create a warm environment where bacteria is likely to thrive. Clothing such as tight jeans and bathing suits should be worn for short durations of time only.