Dactylitis is a severe type of inflammation which develops in fingers and toes. It can be developed either in one or more than one fingers or can even affect your whole hand. There are many underlying health issues which can cause this kind of inflammation. However, it is very important that you should go for a diagnosis if you develop the symptoms of dactylitis without making delay.

The symptoms of inflammation are developed in the form of pain, swelling and other such physical symptoms in the body. In the cases of dactylitis, your body reacts in the form of swelling in fingers and toes.

It is also known as Sausage digits as your puffy fingers appearance looks like sausages. It can be a result of certain infections in the body or some vital changes in immunity system leading to an autoimmune disorder which is the most often condition lies behind this health issue.

The swelling caused by this inflammation in fingers and toe joints get severe over time and cause immense pain which hampers your day to day lifestyle. After sometimes it gets rigid and too difficult to move or work normally.

However, with proper medical care, its symptoms can be relieved to a great extent and one can maintain the same pace of life as they used to have in their normal state. 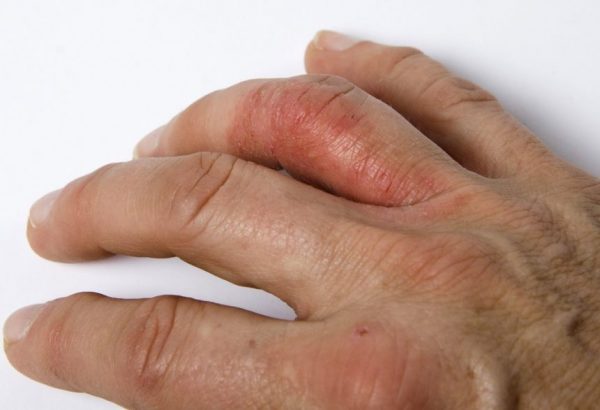 Any health condition or infection that has the potential to cause inflammation in the body contains the risk of causing dactylitis. Some common diseases that cause swollen fingers or toes issue are mentioned below:

Tuberculosis is a kind of bacterial infection that causes inflammation in your lungs. However in rare conditions that inflammation can extend to your bones as well. When this happens it causes swelling and pain in the bones of hands, fingers, and toes.

It can also change the shape of your fingers and toes. This is a rare complication of tuberculosis, however when it develops it mostly affects only one side of the body. Apart from tuberculosis, leprosy is another type of disease which can develop the same kind of swelling in hands, fingers, and toes as in the case of tuberculosis.

Dactylitis is the most common condition associated with Psoriatic Arthritis or PSA. This is an autoimmune disease in which your body’s immunity system attacks itself to its healthy tissues in joints and tendons sheats.

It can cause swelling, pain and damaging inflammation in different joints areas of the body. Dactylitis develops when this inflammation affects joints area of fingers and toes. People having Psoriasis skin conditions have higher chances to develop PSA at a certain point in time of their life.

This inflammatory arthropathy (PSA) disease is divided into five types depending on their symptoms which are:

About one-third of the population affected with spondyloarthritis, are also affected by the dactylitis. Spondyloarthritis is one kind of arthritis that affects joints and entheses, a cluster of tissues where your tendons and ligaments attach itself to bones.

People developing dactylitis, caused by Sarcoidosis an autoimmune disease can also develop symptoms of lupus pernio such as plaques and lesions in ears, fingers, and face.

This type of dactylitis is very painful and can also produce blisters and lesions over and around the affected area. This kind o inflammation is very common in children than adult people.

As a result of inflammation, dactylitis develops in fingers and toes in babies born with congenital syphilis. Though this is a rare condition however when this occurs it affects generally both sides of bodies in its victim.

Some kind of bacterial infections in different organs such as urinary tract, genitals, intestines can cause reactive arthritis. This type of arthritis causes stiffness in joints (fingers and toes), eye inflammation and urinary issues.

Rheumatoid Arthritis or RA is an autoimmune disease in which your immunity system attacks to its joints and as a result of it, inflammation in tissues surrounding a joint area occurs. When swelling in fingers or toes appears like sausage it denotes the growth of dactylitis.

Rheumatoid Arthritis can affect different organ in the body such as ankles, feet, hands, wrist, elbows, and knees. After treatment, the swelling caused by this type of arthritis can be subsided.

Hemoglobin plays an important role in your body by circulating oxygen throughout your body system which is required for your survival. In the cases of sickle cell disease, your body fails to get enough oxygen due to changes in hemoglobin resulting in several symptoms started to develop such as sudden chronic pain, fever, an increase in the count of white blood cells that may require immediate hospitalization.

Dactylitis is the foremost sign of this disease, especially in children and infants. So if any children develop dactylitis, the diagnosis of SCD must be conducted to get assure whether the swelling in hands and toes are causing by this disease or there lies some other underlying issue.

All the different diseases which cause dactylitis condition develops with some different, as well as some common symptoms. Like dactylitis caused by Syphilis can affect multiple fingers at a time whereas dactylitis due to infections reasons affect only one finger.

The only physical appearance of dactylitis size and shape cannot determine its underlying causes. So to start its accurate treatment procedure a thorough diagnosis is required. Certain imaging tests such as X-ray and blood tests are taken by the doctors to analyze the underlying issue responsible for this health condition.

Apart from this, your doctor will ask you regarding your medical history to correlate the connection between dactylitis if it exists. They will ask you about your symptoms like swelling, fever, pain and any other symptoms, etc.

Also, they will ask whether the patient has previously suffered from any infections, autoimmune disorder or an inflammatory condition or not. Some common test to diagnose arthritis which includes the following –

Inflammation in joints caused by arthritis can cause major damaging if necessary treatment is not provided on time. This can even cause immobility or loss of functioning permanently in the affected area. So it is very important that if your dactylitis has developed as a result of a certain kind of arthritis, to get its treatment immediately.

On the basis of diagnostic test reports, whatever will be the underlying cause behind the dactylitis health condition the treatment procedure will involve to cure that particular reason which is causing swelling in your fingers and toes.

So for different underlying issue responsible for dactylitis, the treatment process will vary. For example, if anyone suffering from tuberculosis or the sickle cell diseases who mostly get very ill needs immediate hospitalization especially if an affected patient is an infant or children.

If swelling is accompanied by pain then for relief a doctor may prescribe pain killers or Non-Steroidal Anti-Inflammatory Drugs or NSAID. There is no complete cure for PsA however with medications its symptoms can be relieved to some extent.

In such cases, a doctor may prescribe for Non-Steroidal Anti-Inflammatory Drugs or Disease-Modifying Antirheumatic Drugs (DMARDs) to ease pain and inflammation.

The usage of DMARDs can help you to relieve your pain by reducing the severity of inflammation. Also, it prevents joint damaging risk which lies in the cases of psoriatic arthritis. Without proper treatment, PSA may even cause disabling.

In the cases of Dactylitis caused by RA, a doctor may prescribe for the medications like DMARDs, Corticosteroids, JAK inhibitors, Biologics or genetically energized proteins, etc. to ease its symptoms. If there is a risk of loss of joint functioning, then joint replacement surgery will be the ultimate option that your doctor may suggest you.

Tips To Cope Up With Your Dactylitis Symptoms

Apart from the medical treatment, you can help yourself to cope up with your difficulties caused by dactylitis through the help of some effective techniques so that you can manage your day to day life responsibilities in a much easier way.

Take the Help of a Physical Therapist

A professional physical therapist can help you a lot in your struggle to cope with the symptoms of dactylitis. With their special guidance, you will find a reduction in your stiffness issue which will help your affected joints to move more freely. This will improve your overall lifestyle.

Follow a fix exercise routine and practice it daily. Exercising will improve your blood circulation around your body which will help to reduce your stiffness by keeping your joints more active. Some exercises that can help you to improve your joint’s strength and movements include cycling, swimming, walking, yoga, etc.

Stay more active in your daily life so that your joints can reduce and manage its stiffness on its own. For this include more physical activeness work than the lethargic work where you requires to sit or lie down most of the times. The more you will remain active greater the possibility of a reduction in your inflammation symptoms.

Take Care of Your Diet Routine

Your diet plays an important role in your overall fitness and its scarcity or lack of healthy foods in your daily routine can cause you to suffer from an inflammation risk very easily. So make sure that you eat mostly anti-inflammatory foods to ease your inflammation symptoms.

Also, reduce your weight if you are overweight to reduce the extra pressure from your joints with a healthy diet routine.

Your bad mental health can make your dactylitis symptoms more severe. So make sure that you avoid taking stress and anxiety with proper stress bursting management. You can take the help of yoga and medications to reduce your stress and to keep you more active to sustain with the symptoms of dactylitis.

As the symptoms of dactylitis are mostly caused by some underlying serious health conditions, so it is very crucial that as soon as you develop its symptoms without waiting for its auto- disappearance take necessary medical help without delay.