Arthritis denotes for joint inflammation. This is the most common type of joint disease. As per the Centers for Disease Control and Prevention (CDC) 54.4 million US adults are affected with this joint disease, out of which 23.7 million people have curtailed their activities because of their disability caused by this health condition.

The term arthritis is used to describe approx 200 conditions that affect joints, the surrounding tissues to joints, and other connective tissues. The most common symptoms of arthritis, the rheumatic condition include joint pain, stiffness, swelling, and disability which get worsens with age. It can affect one or more joints area in the body. Its symptoms may develop gradually or suddenly.

Osteoarthritis is the most common type of arthritis that causes deterioration or break down of cartilage which is the hard and slippery tissue that surrounds the ends of bones where it forms a joint. Apart from osteoarthritis, other common forms of rheumatic conditions linked to arthritis include Rheumatoid Arthritis (RA), Gout, and Fibromyalgia.

Some forms of arthritis affect multiple organs causing widespread symptoms. This health condition is more common in older adults especially in people aging 65 years and above, however, it can affect people of all age groups including children.

There is no single reason for arthritis growth. The causes vary as per the different types or forms of arthritis including-

Most of the arthritis type growth is associated with a combination of different factors. Whereas some types of arthritis grow unpredictably in the affected person without any obvious reason. Also, some people are genetically at risk to develop certain types of arthritis.

In such cases, the risk factors increase in the presence of more favorable conditions such as physically demanding occupations, smoking habits, infection, and past injury. These factors interact with genes and increase the arthritis emergence risk in the high-risk group people.

Certain foods intake may help in managing arthritis symptoms and reducing the risk of some arthritis. However, whether any specific food or food sensitivities or intolerance may cause this health condition or not is not clear. Foods that are known to increase inflammation include diets rich in refined sugar, animal-derived foods, etc makes the arthritis symptoms worse. This is because these foods intake stimulates the immune system response.

Gout which is one popular type of arthritis is linked with diet. This arthritis type occurs as a result of an increased level of uric acids in the body that comes from the diet rich in purines. Some high purines foods that can make the gout symptoms worse include red wine, seafood, and meats. However, in this category plant-derived foods high in purines have not found exacerbating the gout symptoms. 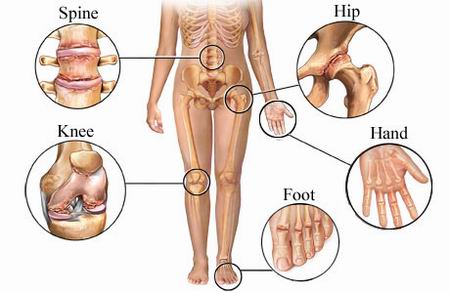 There are more than 100 types of arthritis out of them some are very common as most of arthritis affected people develop these types. Five most common forms of arthritis and their specific symptoms are discussed below-

This is the most commonly developed form of arthritis in comparison to other arthritis types. It involves wear and tear that occurs as a result of the overuse of joints. Usually, it develops with aging but it can also occur due to a joint injury and from obesity as it puts extra pressure and stress on the joints.

That means the specific joints of your body that bear weight such as hips, spine, knees, and feet are the most commonly affected joints in the body. It develops gradually over several months or years. The affected joint area hurt too much. However, it is not associated with symptoms like sickness or fatigue that generally come with other types of arthritis.

As a result of osteoarthritis, your body loses its shock-absorbing ability. This inflammatory condition leads to deterioration or breaks down the cartilage, the slippery material that covers the ends of your bones.

People who are obese or have overweight contains the risk of developing this type of arthritis. This is because the extra pound of your body puts extra pressure on the cartilage as it squeezes between the bones. As a result of this, it damages over time and wears away. Hence, a very little amount of cartilage left behind which is needed to cushion the joint.

This scarcity of cartilage restricts the movement of the affected person by making the movement a painful experience. A grating sound generates whenever the roughened cartilage on the bones surface rubs together. Painful bumps or spurs on the end of the bones may occur, mostly on fingers and feet.

Depending upon the affected joint or joints areas of the body the symptoms may vary. Overall this type of arthritis develops following signs or symptoms-

Rheumatoid Arthritis (RA) is an autoimmune disease. It occurs when your immune system attacks itself to parts of the body especially joints which lead to inflammation. It can cause severe level joint damage if not treated on time. Every 1 out of 5 rheumatoid arthritis affected patients get lumps on the skin called rheumatoid nodules. These lumps generally occur over those joint areas that get pressure such as heels, elbows, and knuckles.

Healthcare specialists are not sure what exactly causes this condition. Some experts say that it occurs when your immune system turns confused after getting a bacteria or virus infection and starts attacking to joints. This attack can spread to other areas of the body too over time.

Scientists believe that two-body chemicals such as interleukin-1 and tumor necrosis factor (TNF) are associated with this inflammation that triggers immune system response. Hence medications that can block these chemicals can help in improving RA symptoms and to prevent further joint damage.

The symptoms of this type of arthritis develop gradually or flare up suddenly. It is more severe than osteoarthritis. The most common symptoms of RA include-

This type of arthritis causes inflammation in joints and on the skin called psoriasis. It develops red, patchy, raised, and white inflamed skin with scales. The most commonly affected areas include tips of the elbows and knees, navel, scalp, and skin around the anus or genital areas.

As per the study reports approx. 10 to 30% of psoriasis affected patients develop psoriatic arthritis in the future. It occurs usually between the age of 30 to 50 however it may also start in the childhood age too. Psoriasis, skin disease is the first symptom of this type of arthritis. It is common in both men and women.

As a result of this type of arthritis growth, the affected patient may develop swelling in the fingers and toes. Its patent often has pitted or discolored fingernails.

It may affect only one joint or a few joints that vary from person to person. In some cases it affects only fingers and toes, sometimes it affects the knee and sometimes the spine only.

Gout is another very common type of arthritis that occurs as a result of uric acid crystals buildup in a joint that causes pain and swelling. It mostly develops in the big toe and or other parts of the foot.

A person who develops this arthritis condition often wakes up with sudden and sharp pain in big toe especially if he or she had drunk last night. The symptoms of gout get triggered by factors like stress, drug consumption, and some illness.

In the lack of necessary treatment, the gout attack may last between 3 and 10 days. Often it takes months and years time to get another attack of gout once you suffer it however by the time the attacks will get more frequent. It may last for a much longer period as well. If remains untreated for a longer duration then it can impact joints and kidneys too.

The gout symptoms develop suddenly or quickly in general including-

Lupus also called Systemic Lupus Erythematosus (SLE) is an autoimmune disease that can affect joints and many other organs in the body. The healthcare specialists don’t know what exactly causes lupus but something interferes with your immune system and it goes awry. As a result of this instead of attacking viruses and external invaders immune system start causing pain and inflammation throughout the body including joints, other organs, and then the brain.

Women especially those who are in their childbearing age are more common victims of lupus than men. African-American women contain a high risk to develop lupus than white women. It generally appears between the ages of 15 to 44.

The most common symptoms of lupus arthritis include-

The aim of arthritis treatment remains to control the pain and aching caused by this condition and minimizing the risk of joint damage. It helps in improving the quality of your lifestyle which is already affected by this health condition.

There is a good range of medications and some lifestyle strategies that help in controlling arthritis symptoms and prevent joints against further damages. Treatment methods that are used for curing different types of arthritis include-

Osteoarthritis which is the most common type of non-inflammatory arthritis is generally treated with pain-relieving medications, physical therapy or activity, weight loss if the affected person is overweight, and self-management training.

Physical therapy is one of the effective treatment methods that include exercises that focus on strengthening the joints muscles of the affected area of the body. It aids in the primary treatment processes of arthritis such as medications and increases their effectiveness. For the best result, it must be practiced under the trained therapist.

Surgery is the last option for the treatment of arthritis. This is an invasive method of treatment in which inflamed and damaged joint is replaced with an artificial one through the surgical procedure. This procedure is mostly used for replacing hips and knees. In the case of a severe form of arthritis in fingers and wrists, the health care specialist may perform a joint fusion. Under this treatment procedure, the ends of the bones are locked together until they heal completely and turns to one.

Apart from the above-mentioned treatment procedures some lifestyle changes and incorporation of healthy habits including things that can reduce stress burden or pressure from your joints help in relieving the symptoms of arthritis.