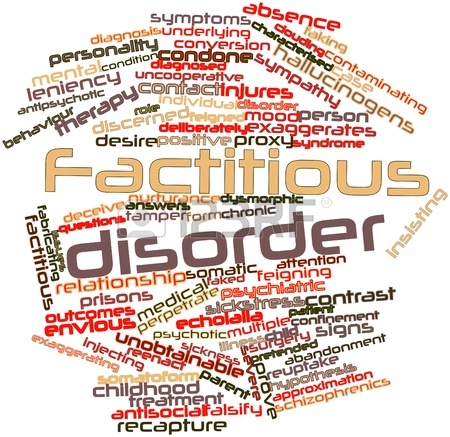 Usually, when someone gets sick the situation is pretty cut and dry. They go to the doctor with a specific set of symptoms, the doctor examines them and maybe runs some tests. Eventually, the doctor makes a diagnosis and prescribes a treatment. For really tricky cases, he or she might even call in the appropriate medical specialist for a second opinion.

But when someone has a factitious disorder, all bets are off, because what may seem like something at first glance might actually be nothing at all.

What is Factitious Disorder?

Factitious disorder is a type of mental illness where someone feels the need to be ill to the point that they might even harm themselves to create the symptoms of one or more diseases. It used to be called Munchausen Syndrome, after Baron von Munchausen who was famous for telling wildly embellished stories about himself.

Unlike hypochondria, where sufferers actually believe that they are sick, people with factitious disorder know that they are not sick.

There are two distinct types of factitious disorder:

Why People Pretend to be Sick

The reasons why people with factitious disorder pretend to be sick are varied, from a need for attention to a need for them to have control over their own bodies. Some might even begin faking illness as a means of punishing a loved one for past neglect, real or perceived; or to have control over someone else by forcing them into the role of caregiver.

People with the external form of this disorder might also have a need for validation, recognition, and respect as a caregiver.

There are those who believe that people fake illness to feed an addiction and get prescriptions for narcotic drugs; while that can happen, it’s not unusual for people with factitious disorder to have lots of prescription drugs on hand, to support their claims of being sick, without ever taking them.

The Symptoms of Factitious Disorder

People with factitious disorder are very adept at hiding their activities and fooling medical professionals. However, as clever as they are, there are still tell-tale signs that loved ones and healthcare professionals should be aware of, including:

The Risks and Complications of Factitious Disorder

People with the external form of this disorder have harmed their own children, including injecting dangerous substances into their bodies and even suffocating them.

Often times, even if the person or his target does not start out sick, the lengths they go to could cause serious illness and even death. If the person convinces a doctor to perform surgery, then there are the risks of health problems as a result of the surgery, or the unnecessary removal of organs and body parts.

Children of parents with the external form of this disorder could also have lasting psychological effects, as well as physical effects from the harm inflicted upon them and from the unnecessary medical procedures.

The diagnosis and treatment of factitious disorder can be very difficult. Because these patients tend to have a lot of medical knowledge, and are adept at hiding their condition from healthcare professionals, it could take years for someone to notice a problem.

Parents with the external form of this disease could appear to be loving, attentive, and even hyper vigilant parents who are totally committed to their child’s health and recovery.

Generally, diagnosis occurs when a healthcare professional becomes suspicious about a patient’s illness, and investigates further. For example, a nurse might notice that a child’s symptoms seem to worsen whenever the mother is alone with him, or a patient who leaves the hospital with wounds that are healing, returns days later with the wounds in worse condition.

If the patient feels that he is being judged, he will be less likely to comply with, or respond to treatment. In fact, healthcare providers often have to treat lightly when it comes to approaching people with this disorder because, if put on the spot, they could sever all tie with healthcare professionals.

Additionally, because he has a vested interest in being ill, he will be less likely to comply with treatments designed to improve his condition.

In severe cases, or cases where a child might be endangered, doctors could also recommend inpatient psychiatric treatment.