HIV rash is one of the symptoms of HIV infection caused by the attack of this virus on the human body. It causes irritated skin that looks red or purple, itchy and painful. However, only a skin rash cannot itself is sufficient to conclude the existence of HIV infection. So it is crucial that you have a diagnosis test once you notice the HIV rash symptoms without further delay.

For many people affected with HIV infection, skin rash is the first sign of this health condition. The HIV rashes can appear either in the earlier or acute phase of this infection or even sometimes in the advanced stage of the infection. As per the UC San Diego Health, 90 percent of people who are diagnosed with HIV, experience skin rashes symptoms and changes during any of its stages.

After the contraction of the HIV infection, you are susceptible to develop its associated rash on your skin just within the first two months of its interaction. However, in many cases, people mistakenly understood this HIV symptom as a symptom of any other viral infection just like any other symptom of this chronic infection.

So it is crucial to have complete knowledge of this symptom to clearly identify this without making delay for the necessary medical attention on time. In this context, it is also necessary to mention here that there is a wide array of illnesses, allergic reactions and infections that can cause this type of irritation on your skin. So alone a rash cannot itself complete the diagnosis of this infectious disease. Further tests are needed to diagnose this infection.

Those who develop this skin rash and consider that they might have developed the HIV infection should immediately contact a doctor. The HIV infection primarily spread through sex, blood transfusion and sharing a needle used by an HIV infected person.

The HIV rash changes its appearance along with the progression of this infection on its different stages. This is because HIV infection primarily affects your immune system hence your immunity power gets weaker and weaker with time. This change in the immune system triggers to different skin reactions.

As HIV hampers a person’s ability to fight back infection so during its complete journey the affected person is likely to develop different types of skin rashes and infections. This is the reason there is no definite rash specific to HIV infected people.

HIV rash differs on the basis of its underlying causes that give birth to this skin outbreak. Things that can cause this skin reaction or allergy include-

The doctor must look for a thorough diagnosis of an HIV related skin rash.

Apart from mild HIV rashes, there are some severe rashes too that can cause serious damages to the skin making them life-threatening too. One rare but serious form of skin rash that develops due to the consumption of antiretroviral medication known as Stevens-Johnson syndrome. When this skin rash develops up to 30 percent of the body area it is called toxic epidermal necrolysis. Its symptoms include-

These initial symptoms of HIV usually last up to 2 weeks.

How do HIV rashes change over time? 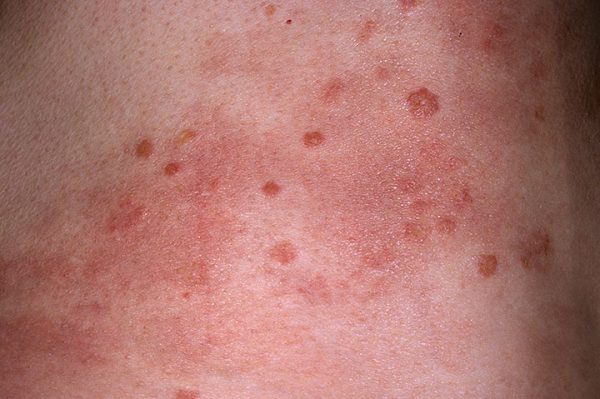 The HIV rashes change very fast irrespective of time. The general outlook of HIV rash depends on the specific rash a person has developed. Apart from this, individuals factors matter a lot on the variation of these rashes.

Factors that are specific to the individual have the potential to change the outlook of these rashes includes overall health condition, medical care accessibility, usage of antiretroviral drugs, and exposure to infected or contagious skin. The skin rashes caused by seroconversion which develops immediately after the infection exposure disappears on its own in general.

Skin rashes caused by chronic conditions such as psoriasis and herpes come and go. The severity range of each HIV rash varies depending on different factors but overall these variations depend on the immune function of the affected person. However, the severity of each outbreak can be reduced with the help of certain medications such as antiviral medications for herpes induced rashes, etc.

The HIV rashes can be cured and healed completely with the proper intervention of medical treatment. However, in the long run, this virus infection makes the immune system of its patient weaker slowly and steadily. Hence the rashes reappear again when the immunity system proves incapable of fighting off these HIV symptoms.

The causes of HIV rash issue includes the following –

Who are at risk of getting HIV

Most of the people who are diagnosed with HIV infection in the UK receive this virus through unprotected sex. Under the flowing conditions and circumstances, this virus can infect any healthy person making them HIV infected.

When to consult with a doctor

Anyone can contract HIV infection through different sources such as semen, infected blood, breast milk and vaginal fluid of HIV infected person. So we can consider that all age group of people contains the risk of developing HIV rashes which is one of its early-stage signs or symptoms.

As the HIV rashes look similar to skin rashes caused by other conditions such as allergic reaction or the flu etc so people often ignore it initially until they start noticing more devastating symptoms.

In most cases, the HIV rash goes away on its own very soon and once this HIV sign disappears chances are there that you may not notice its other symptoms until a much later stage. This is the reason the HIV infection remains undetected in its early phase where if treatment starts then the patient’s condition can improve to a great extent and also it can be stopped from getting chronic.

So it is advised to every individual that if you develop any rashes that look similar to HIV rash and you presume that you have exposed HIV then without further delay immediately consult with a doctor. The healthcare specialist recommends a blood test that can easily detect whether you have the HIV virus or not.

As early you get diagnosed your treatment can be started. The prescribed medications help in controlling the virus’s growth and control the risk of HIV infection to convert into AIDS which is a non-curable disease. With proper and immediate treatment not only you can stay healthy but can also survive longer. Also, the right treatment reduces the risk of spreading HIV virus to other people who comes in your contact in any form.

People who are already diagnosed as HIV positive should immediately contact a doctor whenever they develop any new rash or find the existing rash is getting worse with time. HIV directly hits to your immune system so even a minor infection can spread very faster throughout the body and can develop life-threatening conditions if it remains untreated.

Skin rashes that spread too quickly are often accompanied by fever, lymph node, extreme exhaustion, and vomiting. In such cases, immediate hospitalization is required. So even though you develop a flu-like rash then also you should see a doctor clear out whether you have exposed to HIV or not.

With the advancement in the treatment techniques, rashes caused by HIV are now very easier to treat. The focus of treatment lies around preserving the patient’s immune system and controlling the virus’s growth and spreading the risk. With the immediate treatment methods, the skin issues caused by HIV are getting less common and less severe nowadays.

Prescribed drugs are the most common form of treatment for different HIV induced skin conditions. The medications are prescribed based on the underlying causes of rashes. Over the counter medications such as diphenhydramine (Benadryl) or hydrocortisone cream are effective in reducing the rash size as well as its associated discomforts such as itching, pain, etc.

In the cases of more serious rashes only prescribed medications by a healthcare specialist will only work to relieve the discomforts caused by these infectious rashes. Antiviral or antiretroviral medications helps in improving the patient’s condition. If any medication intake is causing these rashes then those medications intake should be stopped immediately as stopping those medications can help in eliminating those HIV rashes.

Apart from over-the-counter and prescribed medications, certain lifestyle changes help in improving the symptoms of mild forms of HIV rash. A patient suffering from HIV rash must avoid hot showers or baths as it can make their rash worse. Stay away from direct sun contact as it can make your rashes worse.

An HIV diagnosed patient may develop a new rash along with the HIV rash while starting a new medication, using a new soap or eating a new diet or a particular food group. In such cases, possibilities lie that an allergy is causing this new rash.

However, for HIV diagnosed patient it is advised not to take any risk and consult with a doctor without delay whenever they notice any new rashes or see changes in the appearance of their existing rashes. Only a timely treatment can help you in improving your health by reducing all associated symptoms of this chronic infection in the body.

HIV rash symptoms are a big alarming bell for its affected person to get alert and take immediate necessary medical help for stopping this infection from getting worse in the future and increasing the health and life potency of the concerned patient. So it must not be ignored under any circumstance which is only possible when every individual has thorough knowledge about its signs or symptoms.