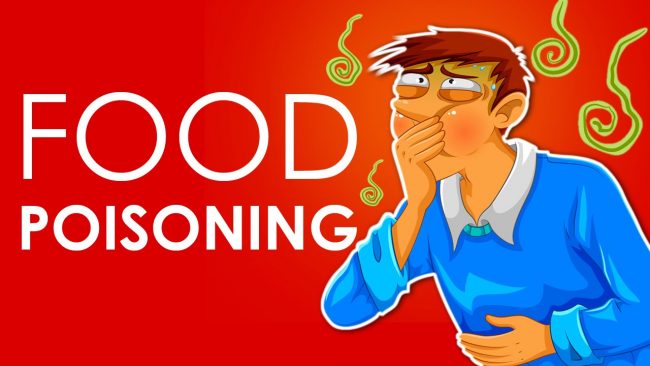 What is Food Poisoning?

Food poisoning is a disease that is associated with drinking fluids or eating liquids or solids that are infected with specific bacteria, viruses, parasites or chemical toxins.

When is Food Contaminated?

Contamination of food can occur during any point of the production: growing, harvesting, processing, storage, preparation or shipping. The cause is often cross contamination which is the transfer of harmful organisms from one surface to another. As food is not cooked, harmful organisms are not destroyed prior to eating and this can lead to food poisoning in the case of raw, ready to eat foods.

These are organisms deriving nourishment and protection from hosts/living organisms. Most common foodborne parasites include roundworms, tapeworms and protozoa.

Food poisoning can also be caused by allergens which are an abnormal response to the food triggered by the immune system of the body. Foods associated with allergies include different kinds of nuts, eggs, seafood or milk.

Campylobacter is a bacterium associated with acute diarrhoea. Transmission occurs via ingestion of contaminated water, food or unpasteurized milk or contact with infected persons or wild animals. Meat and poultry are the foods affected by this bacteria within a span of 2-5 days.

Most people recover completely in a span of some days to some months. Others may suffer from reactive arthritis which has symptoms like joint pain and eye irritation. Salmonella infection rarely causes death.

It can occur in the young, very old or those with immune systems that are weakened. This infection can develop within 1-3 days and is associated with raw or contaminated meat products, milk or egg yolks, whereby inadequate cooking is also associated with this condition.

It can be spread by knives as well as cutting services and food handlers which are infected.

This is a bacteria transmitted through faecal matter. It leads to dysentery and severe diarrhoea. The disease generally occurs in tropical or temperature climates where there is poor hygiene.

Shigella takes 24-48 hours to impact and is generally found in seafood as well as raw, ready-to-consume produce.

This takes 1-2 weeks to impact. It affects humans through raw, ready-to-eat produce and contaminated fluids. It can be spread by an infected food handler.

This has a gestation period of 28 days. It includes raw, ready-to-eat produce and shellfish from water that is contaminated. Again, infected food handlers can impact the body and infect it.

This takes 9 to 48 hours to develop and can be spread through contaminated soil and water. It is generally carried in hot dogs, luncheon meats, unpasteurized milk and cheese as well as unwashed raw fruits and vegetables. Listeria infection is diagnosed through medical history and confirmed with blood or spinal fluid tests. Antibiotic treatment will cure the infection but even with prompt treatment, certain infections result in death. This infection can be fatal in seniors.

These take 12 to 48 hours to develop and comprise raw, ready-to-eat produce as well as shellfish from contaminated water. It can be spread by the infected food handler.

This takes 1-3 days and is transmitted through raw, ready to consume products. It can be spread by an infected food handler.

E.coli 0157:H7 is causing foodborne illnesses. This infection is generally the result of eating undercooked, infected ground beef or consuming unpasteurized milk and swimming in or drinking sewage-contaminated water. Bacteria can also be passed from stools of infected persons.

If symptoms are left untreated, they can lead to paralysis of arms legs trunk and respiratory muscles. Respiratory failure and paralysis may require intensive medical care. Antitoxin medication can be used to treat foodborne botulism diagnosed in early stages.

This form of food poisoning occurs 12-72 hours and home-canned foods with low acidity and improperly canned commercial foods kept placed in a warm temperature for far too long can cause botulism.

This is a bacteria which takes 8-16 hours to impact the body.It is found in meats, stews and gravies that are not kept hot enough or chilled too slowly.

This takes 1-6 hours to impact. Meats, prepared salads, cream sauces and cream filled pastries can contain it. This infection is spread by hand contact, coughing and sneezing.

This takes 1-7 days to impact the human body. It is caused by raw oysters and raw/undercooked muscles, clams and white scallops. It can also be spread through contaminated water.

Food poisoning is caused by parasites in mostly tropical countries and can spread through contaminated food. Symptoms of food poisoning caused by parasites occur within 10 days to some weeks before symptoms of feeling unwell. Symptoms can last longer if untreated. Parasites are generally ingested with contaminated food or water. Parasites ingested include Giardia, Trichinella, Taenia sodium.

Toxins cause food poisoning and are produced by bacteria on or within food products by plants and animals which can be ingested. Numerous plants and animal can be poisonous under certain conditions as listed below:

Specific chemicals are considered toxins leading to food poisoning. Around 80,000 chemicals have been used in developed countries like the United States. Many of these enter foods and cause poisoning. An example of such chemical is mercury located in drinking water and fish such as tuna or marlin. Chemicals which can be toxic if a certain amount contaminates food and water. This includes pesticides, lead and polychlorinated biphenyls.

Signs and Symptoms of Food Poisoning

These are the most common symptoms and they can worsen infrequently:

When common symptoms are felt by a group of persons after eating or drinking similar foods, food poisoning may be suspected. Signs and symptoms may commence within hours after eating the contaminated food or they can occur days or weeks later. Sickness caused by food poisoning lasts from a few hours to several days

In case symptoms are severe or persistent, or you can be vulnerable to serious infection, further treatment may be needed. Antiemetics may be prescribed if vomiting is severe.

Replacement of lost fluids is essential because of fluids and electrolytes much as sodium, calcium and potassium maintain balance in your body. Intravenous fluids are also administered to those in need.

In the absence of dysentery, antibiotics may not be prescribed.