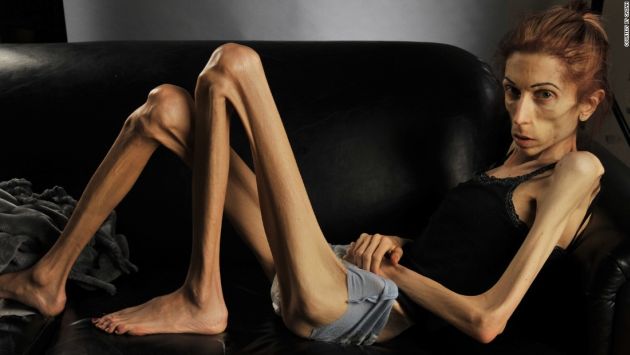 Anorexia nervosa is a psychological disorder defined by extremes in low body weight relative to stature. Apart from low Body Mass Index, other signs of this eating disorder include:

This is one of the most commonly occurring psychiatric diagnoses in young women. Another important statistic is the probability of death from this condition.

Close to 5-20 percent of those struggling with anorexia die- chances of death increase the longer the condition exists. It has one of the highest death rates associated with a psychological disorder. This mental health condition occurs in early to middle adolescence generally.

Men and women who suffer from this disorder are fixated on abnormally thin figures which necessitate a change in eating patterns. It is a condition characterised by self-starvation and lack of appetite.

In this case, the individual feel a huge sense of guilt in eating and purge what he/she eats. Compensation for the eating is through vomiting, exercising excessively or overuse of laxatives

In this type of anorexia nervosa, the limit is placed on the quantity of the good consumed, investing a minimal amount well below body’s caloric intake, leading to slow starvation.

This disorder is not simple. It has many signs and symptoms associated with it. Causes are complex as are its effects.

Individuals suffering from anorexia nervosa may display several symptoms including:

Restrictive eating patterns in anorexia are a bit like dieting, but there are also massive differences between the two. While anorexia nervosa has devastating consequences, dieting is less drastic.

While dieting is to gain target or healthy weight, anorexia involves preoccupation with extreme weight loss as a means of happiness and control.

Early warning signs of anorexia may be concealed or mistaken for dieting or the impact of prescription drugs.

The physical symptoms of anorexia nervosa include:

Physical signs are easy to hide for the patient. They may wear oversized clothes to hide weight loss or multiple layers to maintain body temperature. They will also avoid disrobing for medical examinations in a bid to prevent the doctor from interfering with their weight loss goals.

What Other Warning Symptoms Are There?

Some of the patterns of anorexia signs and symptoms that eating disorder specialists look out for include the following:

Anorexia is a complicated disease affecting men and women in different ways. Adolescent women with anorexia show dramatically higher incidence of alcoholism than the rest of the peer group, as do college going women.

Over the counter energy supplements, dietary boosters and prescription meds for disorders like ADHD suppress appetite and due to the ready availability of these drugs, anorexia patients are more likely to misuse them for appetite suppression.

Numerous internet web communities support toe culture of pro-ana or anorexia and eating disorders, providing “thin inspiration” for anorexics, bulimics and others with deadly eating disorders. Anorexics may join these sites and even follow a pro-ana lifestyle.

Refusal to leave the pursuit of thinness until you go to extremes to lose weight and it’s never enough- this is a sure sign of anorexia.

These are very different from normal eating habits and involve:

It is well known that the defining symptom of anorexia is extreme weight loss but behavioural changes of the disorder appear much before. Changes in eating attitudes, habits and body image beliefs are noted.

Some of the behavioural red flags include:

Anorexia- an unhealthy view of food and obsession with body image- has a host of causes.

As with bulimia, anorexia is a disorder that involves interaction between biology, psychology and social factors.

Psychological and emotional characteristics may leave people susceptible to anorexia including:

Effects depend on the severity of the disease. Forced withdrawal from education, loss of faith, career breaks, isolation from family and friends and suicide are some of the effects. The physical impact of anorexia includes infertility, blackouts, the shutdown of the body, brain damage, heart diseases and death.

According to the National Women’s Health Information Centre, some of the risk factors for anorexia include strict dieting, family history of anorexia, physical or sexual abuse, perfectionism, difficulty in emotional expression or troubled family setting.

In light of the complexities of anorexia nervosa, professional treatment needs a holistic approach which incorporates:

Hell from a dietician is essential for recovery from this eating disorder. This includes the formulation and implementation of a healthy eating plan. Education about normal eating behaviours is also important.

Various forms of therapy like rational emotive, behavioural, cognitive and humanistic may be used to help the anorexic patient to address life issues and heal from trauma. Learning healthier coping skills and improving self-esteem are also a must.

Anorexia is a dangerous eating disorder with a lot of potential complications. If you or a loved one has this disorder, get help immediately to prevent adverse impact of chronic anorexia nervosa.