The leaky gut syndrome is one of the digestive health concerns that affect your intestine lining. Under this digestive condition, the gap existing in intestine walls allows bacteria and toxins to easily pass into the bloodstream of the affected person. This digestive disorder can also lead to many chronic diseases if you do not take immediate action to cure the symptoms of leaky gut syndrome.

This molecule is further utilized by your body for gaining energy, repair and growth work. The human intestine also helps in protecting your body against harmful bacteria and toxins. In normal conditions, the tight openings in the intestinal walls allow easy passage of only water and nutrients into the bloodstream.

However, in the case of LGS these openings get wider hence the food particles, bacteria and toxins become able to easily pass through directly into the bloodstream leading to different painful symptoms develop.

However, there are several scientific evidence which suggests that LGS can lead to different medical conditions that needed complete care and treatment to cure.

As per its medical treatment is concerned it is considered that it can better be improved and cured with the incorporation of healthy changes in lifestyle rather than sole dependency on prescribed medication to treat it.

This is also because lots of unhealthy lifestyle routines and factors increase its growth risk so avoiding them only one can get complete relief and prevent its recurrent risk in the future.

The actual cause of the leaky gut syndrome is still a medical mystery as the healthcare specialists are still not sure what exactly causes this digestive condition.

A protein known as Zonulin is the only considered suspect for this intestinal health condition. When this protein is activated in the genetically susceptible people means people whose immediate parent or close blood relation are diagnosed with LGS, it leads to leaky gut disease in them.

Two prominent factors that increase the risk of zonulin release in the body are intestinal bacteria and gluten which is a protein exists in food like wheat and other grains.

Regarding gluten triggering effect on intestinal permeability, it is said that it only activates in people who are already suffering from irritable bowel syndrome or celiac disease.

Though experts don’t conclude what exactly causes to leaky gut syndrome but they consider differ risk factors that can disrupt your gut health and lead to an increased level of IP. Some common risk factors which are believed to play its prominent role in contributing leaky gut syndrome, digestive condition are mentioned below-

Non-Steroidal Anti-Inflammatory Drugs (NSAIDs)- The long term usage of NSAIDs such as ibuprofen etc can increase the intestinal permeability that leads to the leaky gut syndrome health condition.

Nutrient Deficiency- The deficiency of certain nutrients in the body in necessary limits such as Vitamin A, Vitamin D and Zinc mineral, can increase your intestinal permeability that contributes to the leaky gut syndrome.

Excessive Sugar Consumption- People who consume more sugary foods especially high in fructose have a greater risk of developing the leaky gut syndrome. This is because these unhealthy diets hamper the barrier function of the intestinal wall. Thus its opening gets wider and allows easy passage of direct foods, bacteria, and other toxins into the bloodstream.

Excessive Intake of Alcohol- Excessive intake of alcohol or beyond the daily recommended limit increases the risk of the leaky gut syndrome. This is because the excessive doses of alcohol increase intestinal permeability that contributes to LGS.

Weak Gut Health- Your gut is full of millions of bacteria, some of them are healthy and some of them are harmful. However, when the balance between these two groups of bacteria disrupted, it harms the barrier function of the intestine wall leading to leaky gut syndrome digestive health concern occurs.

Inflammation- Chronic inflammation problem all around the body can interfere with your normal gut health and increases the risk of intestinal permeability.

Autoimmune Disorders- Autoimmune disorders in the body such as Lupus may contribute to leaky gut syndrome symptoms by harming the barrier function of the intestine wall.

Yeast Overgrowth- An overgrowth of yeast in your gut which naturally exists in your gut in healthy quantity, may contribute to leaky gut syndrome symptoms.

Stress- Stress is a leading contributing factor to this digestive disorder. Chronic stress interferes with different intestinal functions and gives birth to different gastrointestinal disorders, the leaky gut syndrome is one of them. 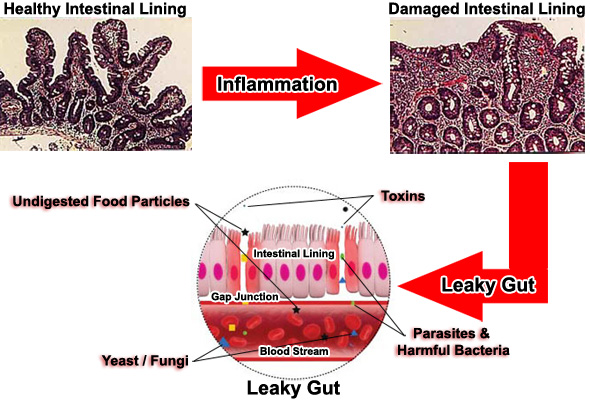 Who are at risk of the leaky gut syndrome

Every one of us has the leaky gut to some extent as this is a kind of barrier which is not fully impenetrable and it must not be. Genetic disposition is a prominent factor that makes susceptible to a related group of people of this digestive condition.

In such cases, the digestive system of the concerned people is more sensitive to changes. However, we cannot consider DNA as the sole responsible factor for this digestive health concern.

The unhealthy lifestyle followed by people all around the world is enough to cause gut inflammation. Excessive alcohol intake, stress, low fiber intake and more concentration on high sugary and highly processed meals are enough to disrupt the balance of your gut flora, leading to increase intestinal permeability.

Apart from this some gastrointestinal conditions and autoimmune disease are also found responsible for this digestive condition in some studies. Certain diseases associated with the leaky gut syndrome are mentioned below.

As per some study report, an increased intestinal permeability plays a crucial role in increasing the growth risk of type 1 diabetes which is an autoimmune disease. In the cases of type 1 diabetes, your body fails in producing the necessary amount of insulin as insulin-producing beta cells in the pancreas destructed by the immune disorder.

Researches support that the immune response responsible for the beta cells destructions are triggered by the foreign substances leaking via your gut or leaky gut syndrome.

One study report says that 42% of type 1 diabetes patients are found with an increased level of Zonulin which is a mediator of increased intestinal permeability. This proves that people with leaky gut syndrome health conditions have a greater risk of developing type1 diabetes in the future.

It is found in many studies report that in celiac disease patients the intestinal permeability remains higher. Celiac disease is a kind of autoimmune disease that causes severe sensitivity to gluten which is a group of proteins found in different types of grains.

Some research study says that in some people with celiac disease health condition the rise intestinal permeability is seen immediately after the consumption of gluten-rich meals. This reflects the higher possibility of the leaky gut syndrome in patients of celiac disease.

Researches show that people with irritable bowel syndrome a digestive disorder are quite likely to develop increased intestinal permeability. The IBS is associated with both kinds of digestive disorders such as diarrhea and constipation.

Crohn’s disease is a chronic digestive disorder and is associated with persistent inflammation in the intestinal tract. It is found in several studies report that increased intestinal permeability plays a crucial role in developing Crohn’s disease.

As per some studies report, people affected with food allergies have a greater possibility to have an impaired intestinal barrier function. As a result of leaky gut syndrome, food proteins could easily pass through the intestinal barrier which stimulates the immune response. The immune response to a food protein is called as an antigen which is a general definition of food allergy.

There is no definite procedure of treatment for leaky gut syndrome health condition because many medical practitioners do not consider it as a valid medical condition that can be cured with conventional treatment technique.

However, since decades healthcare specialists treat several chronic diseases only by improving gut health as the first line of treatment including alternative and integrative medicine practitioners.

One common step taken by the healthcare professionals in different counties including the United States for improving the condition of the patient with this digestive disorder health condition is to recommend changes in their current diet routine.

In such cases, doctors ask to remove certain diets from the daily diet menu which has a potent inflammatory effect and that can interfere with the gut flora until the patient’s condition gets fully healthy. Some very common diets asked for removing from daily diet routine include processed foods, alcohol, medications and any other food that can create sensitivity or allergy.

This health issue primarily triggered and often developed due to an unhealthy diet pattern followed by the affected person so these changes in diet routine proved very effective in improving the symptoms of the leaky gut syndrome in the affected patient.

Many times treating the underlying conditions that are often susceptible as responsible for this digestive disorder proves effective to cure this health condition.

However, a medical practitioner cannot start treatment of any susceptible underlying health condition such as celiac or Crohn’s diseases unless they have a full diagnosis report proving these health problems really exist.

Certain dietary changes that may help in alleviating leaky gut symptoms and improving the gut health include :-

Along with making necessary changes in your diet pattern some lifestyle routine changes can also improve gut and boost your digestive health.

An unhealthy dietary routine plays a vital role in causing the symptoms of leaky gut syndrome and disrupting your gut flora so it is advised to consult with a gastroenterologist who is also an expert in the nutrition department to get rid of this digestive disorder completely.