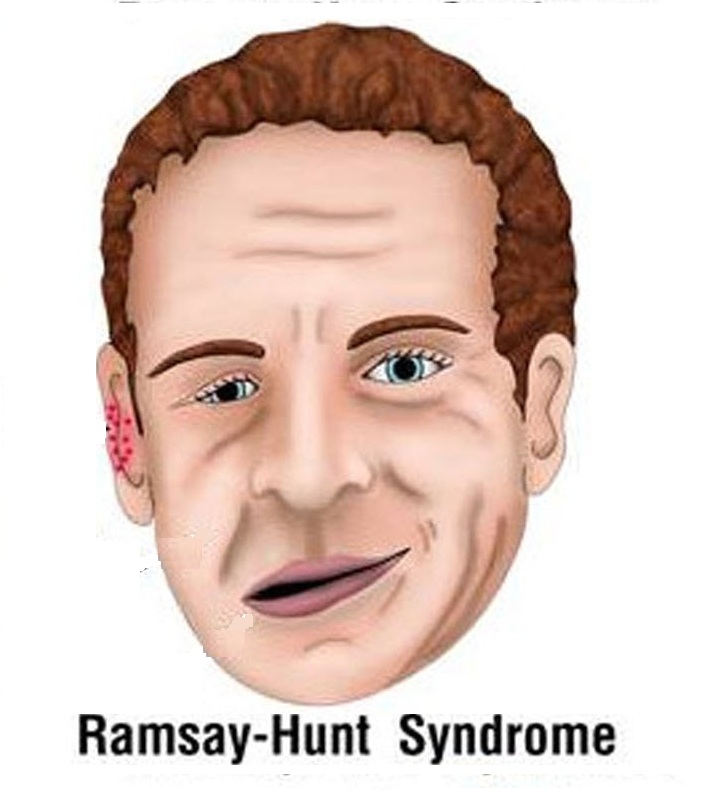 What is Ramsay Hunt Syndrome?

Ramsay Hunt Syndrome/Herpes Zoster Oticus refers to a neurological disorder. In this, the Varicella zoster virus (VZV) specifically affects certain nerves in the head which is basically an infection of the facial nerve. The main symptom of this is a painful rash around the ear when the nerves in the head are affected.

First discovered in 1907 by James Ramsay Hunt, this disease was observed in a patient with otalgia. Initially, the diagnosis was associated with cutaneous and mucous filled rashes but Ramsay Hunt correctly identified the infection as affecting the geniculate ganglion of the brain. The virus in question was the varicella zoster virus or herpes virus 3.

The manifestations of these disease include:

The VZV infection of the head and neck affects the facial nerve chiefly the seventh cranial nerve CN VII. Other nerves involved include CN VIII, IX, V and VI. This can cause ulcers in the external year and ipsilateral anterior gesticulation in two-thirds of the tongue and soft palate. Facial neuropathy is also observed in CN VII. Geniculate ganglionopathy may also result.

Primary infection is chiefly a rash. After the chickenpox, the virus remains hidden in the cranial nerve and the dorsal root ganglia. Reactivation of the latent virus can then result in localised vesicular herpes zoster or rash. It is when the geniculate ganglion of the CN VII within the temporal bone is impacted, that this rash linked Ramsay Hunt syndrome strikes.

Ramsay Hunt Syndrome is also called Herpes Zoster Oticus and Hunt’s Syndrome. This is a VZV infection of the facial nerve’s geniculate ganglion. Facial paralysis of muscles on the same side of the face as the infection results as a part of the disease. The disease is also associated with red rashes or blisters in and around the ear or eardrum and the roof of the mouth or tongue.

Varicella zoster virus is the only cause of this disease. In some cases, the patient may have permanent facial muscle weakness and hearing loss. Prompt treatment can prevent this complication.

National Institutes of Health USA classify this as a rare disease with fewer than 200,000 cases in the US. Most doctors never come across patients with this disease.

A symptom is what is described by the patient while a sign is noted by the doctor. While dilated pupil is a sign, drowsiness is a symptom.
Common Symptoms
Some of the common symptoms of this disease include:

Some of the risks associated with developing this disease include chicken pox patients over 60. It has been known to affect children very rarely. The disease itself is not contagious but it can cause chickenpox in those who never had it before.

Patients need to stay away from infants, pregnant women and those who never had chicken pox as well as people with weakened immune system. Chickenpox and Shingles is caused by the same VZV as Ramsay Hunt Syndrome.

These include painful rash on:

Hearing loss on one side and vertigo or spinning sensation with weakness in one side of the face causing fine movements to become harder and leading to facial droop or paralysis are also noticed.

Doctor will diagnose Ramsay Hunt Syndrome by checking for signs of weakness in the facial muscles and the blister type rash.

Some of the tests carried out include:

The sooner the patient is treated, the less the chances are of his or her symptoms worsening and the easier are the prospects of making a complete recovery.

Doctor will prescribe antiviral medication such as:

For swelling/pain, a corticosteroid has been prescribed such as prednisone mostly by the doctors. Patients may take Diazepam or Valium to calm the feelings of fear and spinning things characteristic of vertigo (which is associated with fear of heights)

In case facial weakness continues after medical treatment, physiotherapy may be recommended to improve the facial muscles flexibility. A botox injection in the upper eyelid may help those having problems in closing one eye. An eye patch can also protect the vulnerable eye. In case treatment is delayed and nerve damage massive, complete recovery may not be possible. Patients may take anywhere from weeks to months to recover.

In case treatment starts within some days of the symptoms, recovery is possible. If treatment is not correct or quick, however, patients may suffer from permanent hearing loss or even facial weakness. As a delay in treatment increases, there is a rise in risk of permanent loss of facial movement and uncontrolled movement like blinking. Inability to close one eye can also damage the cornea and lead to eye strain and vision related problems.

Postherpetic neuralgia can also occur whereby patients may experience pain once the other symptoms have gone. The virus may also spread to nerves such as brain and spinal cord. This can cause weakness, headaches and lead to mental confusion and fatigue.

Corticosteroids and oral acyclovir are generally used. One study even studied the combined effects of both while another research carried out found oxycodone was safe when controlled release in patients with acute pain due to herpes zoster. Vestibular suppressants may also be safe and well tolerated if symptoms are severe. Corneal irritation and injury need to be prevented. Temporary relief from otalgia through local anaesthetic or cocaine to the trigger point especially in the external auditory canal may be sought. Geniculate neuralgia can be controlled through Carbamazepine.

Ramsay Hunt Syndrome is not a mild disorder. It can lead to serious complications which can be scarring and cause disfiguration for the patient. Apart from this, loss of hearing and facial paralysis can result. This is why treatment is essential. Quick and prompt care can get you to a safe point of recovery with minimum complications. Therefore, in case the symptoms should appear, seek medical help immediately.