Possibility lies that the home pregnancy test kit or any other homemade pregnancy testing method you are using may show a false positive or negative pregnancy test report. This particularly happens because the report of pregnancy depends on many factors and if all of those factors are not streamlined then chances of the false report remain very high.

In general, the test kit that you buy from a medical store for testing your pregnancy at home are very reliable as they produce 97% of accurate test report but exception are there in every case. There are some elements which can cause these test kits to produce a false positive or false negative pregnancy report.

These test kits work on its ability or capacity to detect the quantity of HCG hormone existing in the urine that you apply on the test kits during the testing procedure. HCG is a hormone which is produced in your body when the implantation phase is started. On the starting few months of your pregnancy, the quantity of these hormones keep on increasing after that it gets stagnant and then after delivery, there will be no further existence of these hormones.

Both positive and negative test reports depend on the concentration level of these pregnancy hormones in your blood or urine. Also, these test kits are accompanied by some guidelines for its usage. If a user is not following them properly then chances of a false test report exist. Below we have described some primary elements or factors which can cause a false positive or negative test report.

The chemical pregnancy happens when a fertilized egg known as embryo finds it difficult to attaches itself to the uterus lining and hence growth doesn’t happen. This type of pregnancy lies for very few days and ends up with heavy bleeding like period and cramping in the abdomen.

This kind of pregnancies is a very rare case and very little number of women experiences it. This is also less known as because in the early stage of pregnancy the women’s don’t even aware that they are pregnant only if they do a home pregnancy test then only they get to know about it. This causes emotional breaking as the positive news turns to be negative after one or two weeks.

So if someone has developed a chemical pregnancy and at that particular time, testing it via a home pregnancy test kit then it can cause a false positive test report. Progesterone is a hormone which is necessary for the growth of an embryo but in the case of chemical pregnancy, the quantity of this pregnancy growth hormone reduces to a very low level.

The other important factors which cause a chemical pregnancy are some problems in the uterus which obstruct the growth of embryo such as scar tissue, congenital uterine anomaly, fibroids etc. These factors cause the misshape of the uterus and a normal embryo growth is not possible in the case of an improper shape of the uterus.

Chemical pregnancy happens at a very initial time of conception and ends up also very soon that is why it is suggested to the pregnancy expectant to try any pregnancy test kit only when the period date is crossed by one week so that any emotional cramping will not have to face because of the false report.

If someone has faced a recent miscarriage or abortion is done for terminating a pregnancy then it might be possible that even though you have ended up with the last pregnancy but the test kit report is showing a positive pregnancy report.

HCG hormone starts getting produced by your body the moment a fertilized egg successfully implant itself to the lining of the uterus and keeps on developing for next few months. When you suddenly face a miscarriage or abortion this pregnancy hormone takes time in reducing its level inside your body. Minimum six weeks are needed even after the end up of pregnancy to clear these hormones completely.

So after an abortion incident or a recent miscarriage, if you will test your pregnancy in next six weeks from the date this miscarriage happens, the test kit will show a false pregnancy report. Also if the miscarriage process was spontaneous then also the chances exist that pregnancy tissues existence in the uterus which causes to show a false report. In this situation a small surgery called dilation and curettage are needed to be done for clearing out the remaining substances of pregnancy otherwise it can cause other health problems.

Under the case of ectopic pregnancy the fertilized egg instead of implanting itself in the uterus it gets stuck to the fallopian tube which is not a place for the growth of the embryo and hence this pregnancy cannot sustain further and will not grow. This kind of abnormal pregnancy mainly happens in the fallopian tube so it is also known as tubal pregnancy.

Though the fertilized egg will not grow further as it is implanted in a wrong place then also it will keep on producing the HCG hormone that’s why when you take a home pregnancy test it shows a false pregnancy test report whereas you are not normally pregnant.

Apart from fallopian tube some other places where an embryo can implant itself are the ovary, abdominal cavity, and cervix. As these are not a right place for the growth of a fertilized egg so in the lack of necessary space and growth hormones the pregnancy doesn’t last long.

This is a severe health condition which immediately needed medical attention otherwise it can badly hamper the health of the lady who has developed the ectopic pregnancy. The primary symptoms of this type of abnormal pregnancy are the sharp pain in the abdomen area, shoulder pit, pelvis and neck, soreness in the breast, nausea and vomiting, diarrhea, weakness, pressure on the rectum, severe cramp on side of the abdomen.

A certain type of medication triggers to HCG hormone production and at that particular time if you are taking a home pregnancy test then it will show a false positive pregnancy report. This mostly happened when you are taking a medication for inducing or pursuing the pregnancy. These pills led the follicles to discharge the matured eggs by triggering the HCG shot.

Other medications which can cause to reflect false positive pregnancy report are Methadone, Diuretics such as Lasix, Diuscreen, Antihistamines such as Promethazine, Antianxiety medication such as Alprazolam, Diazepam, Parkinson’s disease medicines such as Bromocriptine, Anticonvulsants such as Phenobarbital, Antipsychotics such as Chlorpromazine, Clozapine etc.

The home pregnancy test kits produce its result on the basis of its HCG detecting capability existing in the urine of any user but the reality is that HCG can do exists in your urine and blood because of many health reasons apart from pregnancy. In that case, if the kit is showing a positive test report of pregnancy then it will be absolutely a false or wrong test report.

Some special medical condition which can cause a false test report is the urinary infection, ovarian cysts like corpus luteum cyst, some kidney diseases which causes to generate white blood cells in the urine, pituitary problems which are very rare, ovarian cancer etc. If you or anyone who suffers from these medical conditions then chances exist that you can generate a false pregnancy test report when tested in a home test kit.

When you do a pregnancy test at home through any test kit purchased from the medical store then you need to follow some recommended steps or procedure of testing which remains mentioned on the guideline page of the kits. If you don’t adhere all these guidelines then chances remain very high to produce a false negative pregnancy report.

The guidelines are very simple then also some users make mistake and because of anxiety they do some trifling mistake like waiting time which is mentioned in the kits are not maintained and the user picks out the kit for checking the result before time. This early interference obstructs in the work of these kits and it doesn’t find enough time to detect the HCG present in the urine hence produces a false report of pregnancy.

Once the fertilized egg implants to the uterus lining the human chorionic gonadotropin or HCG hormones start getting secreted in the blood as well as in urine. Minimum 7 to 10 days of ovulation date, the placenta will secrete the HCG hormone after a successful conception so for detecting the HCG in urine test kits will take 7 to 10 days after ovulation.

If someone has tried a test kit before the completion of 7 days of her ovulation time then even she is pregnant the home pregnancy testing kit will show a false negative test report. This particularly happens because at this point of time the level of HCG hormone is very low in your urine so the test kit is unable to detect it hence showing a false report.

In general, the test kits which are available in the medical stores are very sensitive and they can successfully detect the HCG remaining present in the urine utilized for the testing purpose but all are not equally effective or sensitive to the HCG hormone. Hence the test kit which you are applying for checking your pregnancy report it would have less sensitivity then it will show a false negative pregnancy report.

For an accurate report from the home pregnancy test kit, it is always better to wait at least for a weak to cross the menstrual cycle occurring date. 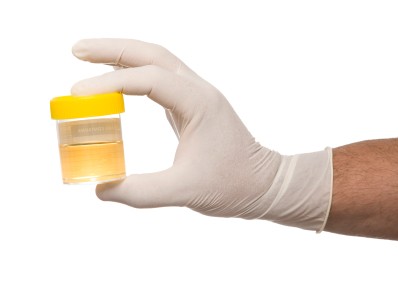 In the case of diluted urine which mainly happens when you have a habit of drinking lots of water and frequent urination which causes to reduce the level of HCG in urine. Hence if diluted urine is used for the testing purpose it will show a false negative pregnancy report even though you are pregnant in reality.

Also if you have collected your urine sample other than the first-morning urine then also chances of the false negative report is very high. The ideal time for collecting your urine sample is the early morning first urine as at this point of time the concentration level of HCG remains very high.

Whether you got a false positive or negative pregnancy test report if you are very much sure about your pregnancy or your nonpregnancy then try the second test with a fresh kit after a week difference from the first test. Make your confusion clear by taking a second trial test as lots of factors are there which can cause to generate a false report of pregnancy.