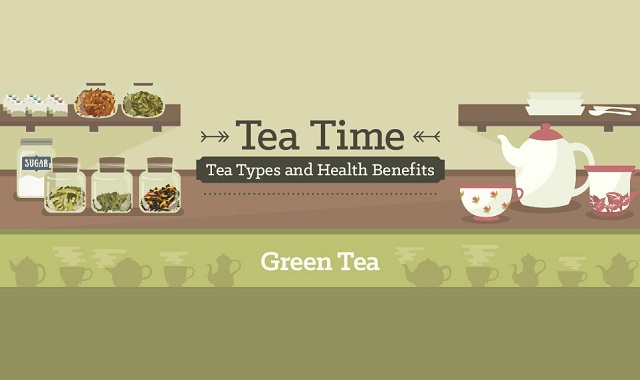 Believe it or not, tea is the most popular drink next to water.

You might be surprised to know that tea is consumed as a medicine for over centuries. Consuming tea has long been believed to possess hypotensive effects in popular Chinese medicines.

In this post, let’s take a look at 7 types of popular teas, its cultivation, chemical composition and its health benefits.

A quick disclaimer: I am not a nutrition expert and this does not intend to constitute an expert advice. It is only the results of my own research.

Green tea has been used as a medicine for thousands of years. Though it is originated in China, it is now widely used throughout Asia. Once they’re handpicked, the leaves are dried and heat-treated. The caffeine content in it’s about 25 milligrams per cup.

Though green tea is well known for its valuable antioxidants and minerals contents, when you brew a cup of green tea, unfortunately, water can only extract a fraction of its benefits.

However, variants like matcha tea can help you consume the full potential of green tea and one cup of matcha is similar to 10 cups of regularly brewed green tea in terms of nutritional content. And the tea tastes similar to that of spinach or has a vegetable-like taste, according to Yuki, a blogger who writes on Matcha tea.

A lot of studies have been conducted by different agencies about the health benefits of green tea.

According to Karen Collins, a registered dietitian, and a nutrition adviser at the American Institute for Cancer Research, consuming a cup of green tea may lower the risk of cardiovascular disease by 10 percent.

Many other studies reveal that catechin compounds in green tea can have various protective effects on neurons in test tubes and animal models, which can potentially lower the risk of Alzheimer’s and Parkinson’s diseases.

Black tea is the most common variety and still accounts for over 90 percent of all tea sold in the west. Comparing with other less oxidized teas such as green, oolong and white teas, black tea is well known for its flavor and contains the highest amount of caffeine; about 40 milligrams per cup.

It is recommended that in order to get its full benefits, black tea has to be consumed without milk and sugar. Let’s take a look at a few benefits of drinking black tea on a regular basis.

Antioxidants: Drinking black tea on a regular basis can help block DNA damages associated with tobacco usages as it contains a high concentration of antioxidants.

Cancer prevention: Black tea contains antioxidants like polyphenol and catechins, which are also well known for their capability to prevent cancer and tumor.

Unlike black tea, oolong tea is fermented for a shorter time and is semi-oxidized. Oolong tea is combined with catechin, a type of natural phenol and anti-oxidant which makes the tea richer in taste. The caffeine content in the oolong tea is about 30 milligrams per cup.

Here are the benefits of drinking oolong tea on a regular basis.

Weight loss: According to a study, oolong activates an enzyme responsible for dissolving triglycerides, which can help burning more calories if it is served regularly.

Dental and hair health: Because of its high level of antioxidants, oolong tea can prevent hair loss. It also helps to improve the oral health by producing bacteria that prevents tooth decay and oral cancers. It can also help preventing osteoporosis and strengthens the bone structure.

Both white and green teas come from the same tea plant, Camellia sinensis. The main difference is that its leaves are picked when they’re very young.

The caffeine content in the white tea is almost about 15 milligrams per cup. Since it has to be handpicked in the early spring, it is more expensive than green tea.

Both white and green tea contains same type of anti-oxidants contents known as catechins, which helps to fight against diseases. Comparing with tea in bags, loose tea contains more antioxidants because the leaves are less processed.

While white tea is consumed as a common beverage, it has numerous health benefits. It is also considered as a better alternative to coffee because of its very less caffeine content.

Help preventing diabetes: Some of the common symptoms of diabetes are excessive rise in plasma glucose levels, decline in insulin secretion and excessive thirst. Studies show that white tea consumption can prevent such symptoms.

Flavored teas are made by adding aromatic compounds to black, green or white tea leaves. The total amount of agent applied depends on the flavor and its desired strength, but usually falls between 0.5% and 5% of the weight of the tea being flavored.

Recommended reading: How to make scented and flavored tea at home

Flavored teas comprises the same levels of antioxidants that of unflavored ones. In fact, those flavored with fruits like blueberries may contain even more antioxidants.

And, it has almost the same health benefits that of unflavored ones. For example, flavored tea can reduce plaque formation and restricts bacteria growth the form cavities and tooth decays.

Let me make it clear. Herbal tea is not actually a tea. They’re usually made by infusion of dried fruits, flowers, and herbs in hot water, and it doesn’t contain caffeine at all. Besides being a tasty beverage, serving herbal tea has lots of healthy benefits.

That being said, before serving herbal tea, the specific ingredients used in preparing it must be checked individually as it may contain plant materials that are known to be toxic. For example, drinking herbal weight-loss teas may contain dangerous laxatives.

Comparing with other traditional teas, less amount of research are conducted on herbal blends. However, a study conducted by the Journal of Nutrition found that serving herbal tea on a daily basis could help lower blood pressure.

And it is also found that drinking chamomile tea on a regular basis is very effective in relieving digestive distress.

Yellow tea is a rare and expensive variety of tea produced by steaming under a damp cloth after the oxidization process. This process gives the leaves a slightly yellow in color. Similar to the white tea, yellow teas are also hand-picked in early spring when they’re too young.

Yellow teas are famous for their sweet and fermented aromas. While it is closely related to green tea and has similar health benefits, it has a smoother palate and it is easier on the stomach.

Yellow Tea is high in antioxidants and is known to work well on the stomach when consumed. It contains relatively low in caffeine and the caffeine content lies between green and black tea.

Weight loss: If consumed regularly, it can help you in the weight loss process.

Cancer prevention: The tea is well known for its ability to fight against cancer.

Dental health: As the yellow tea is an excellent source of anti-oxidants and fluoride, it helps in preventing tooth decay and aids to strengthen the bones.