Pulmonary Edema is a type of lung disorder which develops due to fluid accumulation in lungs causing difficulty in normal breathing pattern along with other symptoms. However, after the detection of the real causes of pulmonary edema, it can be relieved if necessary medical treatment and care are given on time.

Your lung contains several air sacs which get filled with oxygen and releases carbon dioxide during the breathing process. However, in the cases of pulmonary edema instead of filling with oxygen from the air these sacs remain filled with fluid which obstructs the normal inhaling and exhaling function of air.

As a result of this lung issue, your bloodstream doesn’t get the necessary amount of oxygen which is needed for different organs in the body to run and work properly. This causes to develop different symptoms along with breathing shortness such as chest pain, bronchospasm, tachypnea, tachycardia, cyanosis, hemoptysis, etc.

Pulmonary edema can be acute or chronic. When it is acute it develops with sudden symptoms of an extreme level of breathing shortness which is a medical emergency and needs immediate medical attention.

Chronic pulmonary edema is a condition whose symptoms develop over a very long period of time or in very slow motion and intensity. The treatment of pulmonary edema health condition depends on the causes or reasons which lie in the root of this health issue.

In most of the cases of pulmonary edema, congestive heart failure is detected as the primary culprit responsible for the growth and development of this health condition. In the cases of such a bad heart condition, the heart fails to pump blood normally in the body leading to accumulation of fluid in air sacs in the lungs.

Apart from congestive heart failure other reasons or conditions which are responsible for the growth of pulmonary edema include certain trauma in the chest wall, pneumonia, a side effect of certain medications or due to some drugs usage, excursion to high altitude, etc.

As this health issue primarily affects the normal breathing pattern of its victim so its treatment focus lies around improving the breathing pattern along with dealing other underlying reasons which are responsible for its growth and severity.

Additional oxygen is given to the patient in the cases of acute pulmonary edema after hospitalization to bring the patient’s condition under controlled. After that necessary medication and other services are given to cure all the underlying causes. 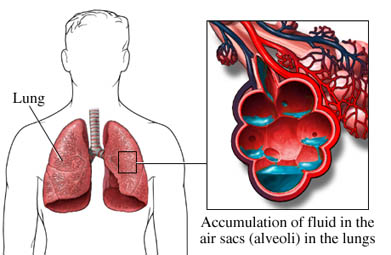 The symptoms of pulmonary edema depend on its underlying reason which causes to develop this health condition. Depending upon different causes of this health issue its signs or symptoms are mentioned below.

The HAPE health condition develops during traveling to a high altitude area or while exercising in such places. Its signs or symptoms are very much similar to acute pulmonary edema. The overall signs of HAPE include the following-

Your lungs have several elastic and small air sacs which are also known as alveoli. During the breathing process, these air sacs get filled with oxygen and carbon dioxide is released which is a normal condition.

However, in certain cases, these air sacs or alveoli get filled with fluid instead of air which prevents the absorption of oxygen in the bloodstream. There are many reasons lies behind this fluid accumulation but in most of the cases, it is related to certain heart issue also known as cardiogenic pulmonary edema.

This happens because of the close relation or interconnection between the lungs and heart which gets a trigger to fluid accumulation in the lungs if any issue exists in the normal functioning or pumping of the heart.

Due to fluid accumulation, the bloodstream doesn’t get enough amount of oxygen and release of carbon dioxide gas doesn’t happen normally. Heart related or cardiogenic pulmonary edema occurs under the following heart conditions:

Apart from heart concern other health conditions which can cause pulmonary edema health issue which is also known as non-cardiogenic pulmonary edema includes the following:

Under the condition of ARDS, the air sac remain affected due to underlying inflammation response caused by the above-mentioned lungs traumas. The result in the leakage of air sacs which get filled with fluid out of the blood vessels over a period of time causing pulmonary edema.

Certain kind of brain trauma or injury that leads to bleeding in the brain, brain surgery, and severe seizures, etc. causes fluid accumulation in the air sacs of lungs which develops neurogenic pulmonary edema.

In the cases of lung collapse or under the condition when a large amount of fluid is removed around the lungs area, the lung expansion happens at a very rapid rate.

High altitude pulmonary edema occurs due to traveling to a high altitude area of approx. 8000 feet or above. This develops with the symptoms like breathing shortness which even persist in the normal surface or location.

An overdose of aspirin can lead to intoxication resulting in pulmonary edema health issue, especially in elder age people.

Excessive consumption of drugs like methadone or heroin can cause pulmonary edema health issue.

Pulmonary edema may develop as a result of some medication’s reactions.

Due to exposure of some chemicals can cause inflammation leading to fluid accumulation in air sacs in the lungs.

Some rare conditions which can cause to develop pulmonary edema include eclampsia in pregnant women, Transfusion Related Acute Lung Injury or TRALI, Pulmonary embolism in which a blood clot traveled to lungs causing fluid accumulation and some kind of viral infections.

The focus area of pulmonary edema diagnosis lies around the detection of fluid accumulation in lungs and other symptoms which denotes the existence of this health issue.

In order to check this, a doctor will conduct the necessary physical examination. With the help of a stethoscope, the doctor will check for an increased heart rate or heart-beat, an abnormal sound detection from heart, rapid breathing rate and cracking sound from the lungs.

Other than this a physical examination of the neck area will be done to check if any fluid build-up is there or not. Abdomen and legs area is checked for any swelling existence. Your skin will be checked to verify whether it turns to blue or pale colored.

Also, the doctor will ask about your previous medical history to ensure any correlation between your other health condition and pulmonary edema. After discussing your all symptoms if they believe that your lungs have fluid build-up then they will ask for other necessary lab tests.

Apart from physical examination, other pulmonary edema diagnosis tests include a blood test to detect the oxygen level, total blood count, ECG and ultrasound for detecting an abnormal heartbeat or the signs of heart attack, and X-ray of the chest area to detect fluid existence.

In the cases of acute pulmonary edema, the first line of treatment begins with the necessary oxygen supply with an immediate effect. The oxygen will be provided either through a face mask or it will be provided through tubes inserted in the nostrils of the patient.

Once the condition of patient stabilizes then further treatment process conduct to cure and treat underlying issues which are causing this health concern.

This may include treatment of heart issues, medications, and other illnesses whichever is found responsible for the occurrence of this serious health condition. The doctors generally prescribe for diuretics to reduce the pressure from the heart and lungs.

Other than that following medications and treatment measures are applied for treating pulmonary edema depending upon the real cause of this health issue.

These medications are prescribed to bring pulses under control. It relieves the pressure from arteries and vein to reduce the fluid accumulation in the lungs.

In order to reduce anxiety and breathing shortness problem, this narcotic is prescribed by the doctors. However, the usage of this drug is associated with health risk so its application is reduced to a great extent by many doctors.

These medications help to reduce the fluid pressure going into the lungs and heart by releasing fluid from the body in the form of urine.

These medications help to reduce pressure from the heart by dilating the blood vessels.

Apart from the above medications in the cases of severe pulmonary edema more intensive care and treatment is required to stabilize the position of the concerned patient.

A breathing tube or endotracheal tube is inserted down the throat to provide more air into the lungs for breathing using mechanical ventilation.

Apart from these treatment procedures, the doctors recommend for some important lifestyle changes in order to keep this health issue in check in the future.

By avoiding certain conditions which are considered as primary reasons for the growth of pulmonary edema can prevent the growing risk of this severe disease. Some vital preventing measures are mentioned below to keep pulmonary edema in check.

More than a normal level of cholesterol in the body is not at all good of your overall health. An excess amount of cholesterol or high blood cholesterol leads to fat deposits in blood vessels resulting in pressure on heart increases due to reduced blood flow.

This further develops into pulmonary edema when pressure passes on the lungs. However, with some healthy changes in your lifestyle, you can get rid of this issue by controlling your cholesterol to the normal level.

If you are overweight or an obese person then reduce your weight to avoid major health concerns which are directly linked with the increased body weight such as cardiovascular diseases, high cholesterol, high blood pressure, and diabetes.

People who are suffering from heart diseases or high blood pressure should reduce their regular salt intake as it is unhealthy for these health issues and can make them worst if its limit is not reduced on time.

Exercising is very important for people who are suffering from certain heart disease. A moderate aerobic exercise at least of 30 minutes for five days in a week is essential to keep your heart in a healthy condition otherwise a prolonged heart health issue can cause to develop pulmonary edema in future.

Smoking is considered as one of the primary root cause for the growth of cardiovascular diseases which increases the risk of cardiogenic pulmonary edema if remain unchecked. So quit smoking as early as it is possible for you in order to avoid such a chronic health concern.

If you are about to travel a high altitude then the possibility of developing HAPE lies if you consider walking more than 1200 feet in a day after reaching to 8200 feet altitude. However to avoid the risk of HAPE doctors prescribes for medications which prevent its symptoms like breathing shortness, headache, etc.

So to avoid such condition before ascent takes this medication in a day before to your journey and continue with this medication even after five days when you reach the altitude.

The treatment gets easier once the causes of pulmonary edema are identified properly on time. However, everyone should stay alert by following all the preventive measures in their day to day life to avoid the risk of this chronic health condition.