You are here: Home / Diet & Fitness / Common Annoying Problems at Gym: How to Deal With Them 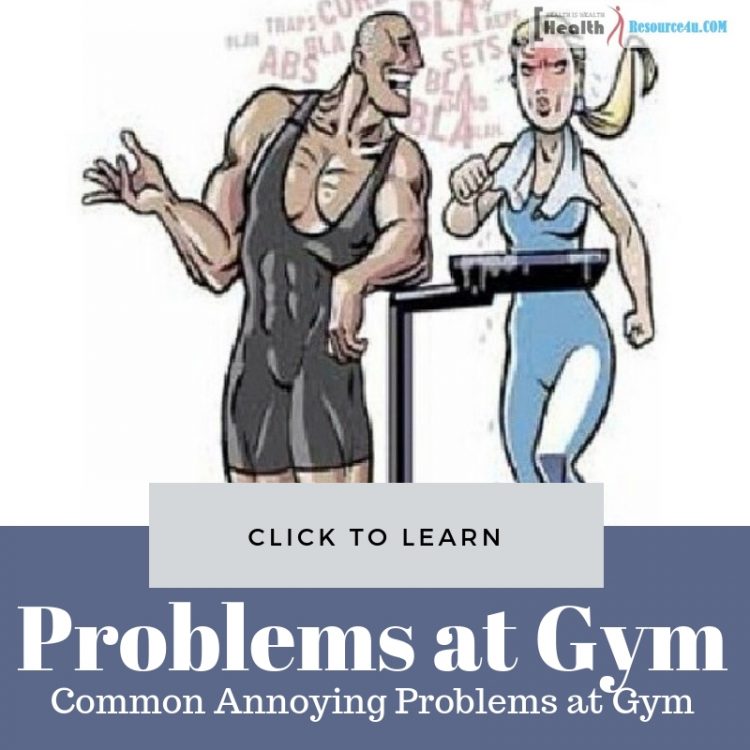 Most of the fitness plan and goal ended up with failure results because of some annoying situations and behaviors of the gym-goers. This particular reason is considered as one of the primary sabotaging factors that break the enthusiasm of many new gym buddies. So if you are getting annoyed with the problems in gym, then you have absolutely visited the right place.

Today we are going to discuss some annoying events that gym-goers usually has to face or go through. It doesn’t mean that you are perfect and you do not indulge in such activities that make others uncomfortable.

It can be anyone, you, your next buddy or any other person. However, with some clear ideas regarding these triggering factors, you can remain alert to deal with them whenever these situations will come across you.

Some common annoying things people generally do at the gym which must be stopped as sooner as possible for the sake of a healthy and comfortable environment of these fitness centers and for the gym-goers values are mentioned below. 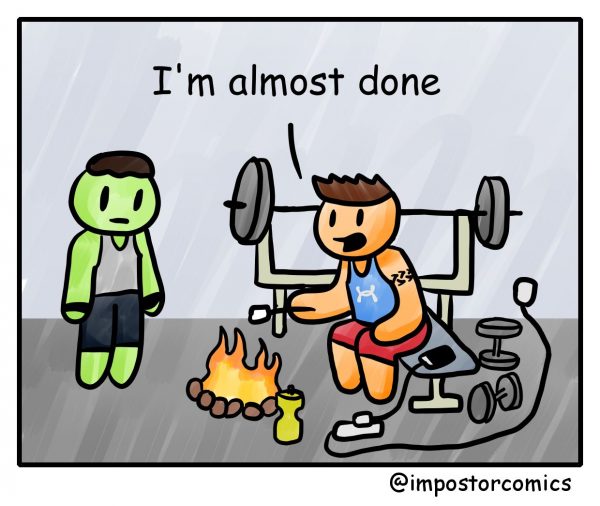 One common annoying scenario that people often come across during the gym hours is the unstoppable chatting that grabs your attention in spite of your hard effort to ignore it.

Also, it is found very disruptive for the trainers as well to guide people for the workouts. Especially it becomes difficult if you meet an old buddy after a long time. However, with some polite gestures, it can be well managed.

You can ash your chatty exercise buddy to talk later when you will be off from the gym or you can share your goal for the day that you have to achieve anyhow. We are sure that your buddy will respect your urge and will let you focus on your target.

Other things that you can do, have mutual understating to do gossip either before or after the gym class so that in between you and your buddies can focus on workouts instead of such unnecessary indulgence in gossips.

Using Workout Space as the Owner

It is a common tendency of regular gym goers that they use every time the same space or spot for the workout practicing as they own them and they have a full right over it. They even don’t allow others to practice there in their presence.

This kind of situation creates unhealthy conflict scenarios between different people at the gym and for trainers, it becomes a very annoying situation to handle this conflict. However, this kind o scenario can be well managed with your own wisdom if you are ready to give equal opportunity to even other gym people instead of those biased thinking as you own that particular space.

Similarly, this annoying scenario happens with the cardio equipment application as well. These workout equipment are generally bound for a particular time limit for every other gym-goers. However, if one particular person will practice exceeding the set limit like 20 or 30 minutes then it becomes difficult for others to use that equipment.

So to handle or avoid such annoying circumstances it’s better that you respect others time as well and leave such cardio machine usage after the stipulated time. This will give equal opportunity to every other person for using all gym equipment as well as different workout spaces.

Making Recording or Taking Pictures of Your Workout

Some people at the gym are too annoyed to tolerate by their behaviors. Nowadays social media updation, of your every small to big incidents of your life is a fashion trend. In the series of such phenomena taking selfies and recording of your current life event is now a very common scenario that people think as their cool behavior.

You must have come across some gym-goers which click their pictures too often or make a small recording during the workout to upload in their current status which is too annoying for others to see the same thing every other day. Also in these random clicks and recording, even others also get captured in spite of their unwillingness.

See gym is nobody’s personal space to do recording or taking random selfies. It is a fitness center where people come with a particular aim to fulfill. So it’s better that you focus on your workout only and let others focus on their workout without doing such a distracting activity.

Leaving Equipment Without Wiping Down

This is not to mention that what untidy or unclean workout equipment or untidy floor can do for your health. The body sweat that comes out during the practicing period makes the used equipment full of germs which can easily pass on to the next person who is going to use it.

So be a gentleman and make habit of wiping down equipment after using it so that it won’t be unhealthy for the person who will use after you. Also, it will be considered as your generous behavior that compels others as well to do the same.

Similarly, don’t leave the floor messy or untidy after the completion of your workout session. Yes, you do not need to super clean it but at least leave it in such a condition that others will find a healthy environment to continue with their practice without getting an annoying feeling within them.

Resting on Equipment during the Downtime

Some gym-goers have a very annoying habit of resting or hanging out on workout equipment during their downtime or in between the sets swapping. Mind it this is not your personal place. So under any condition, you cannot make others waiting for the machine which you are using for hanging out.

If you need to message or talk in a call use the restroom or the locker room instead of using machines as your armchair for the gossips. Also if possible avoid checking your social media accounts or your emails during the gym hours and give respect to yours as well as others time too by using the gym hour, only for the workout.

Digestion Issues during the Workout

One annoying situation that gym-goers have to face is a gastrointestinal issue during the workout session leading to gas and bloating problem. This interrupts in between your practicing hour and necessity of using washroom arises which is another problem that you or anyone else must not like to face.

This particularly happens because most of the people don’t even know what they should eat and what not especially before going to the gym. So to prevent this kind of annoying situation one must avoid the consumption of heavy meals or highly processed foods which takes a long time to digests and easily creates digestive problems like gas, bloating, etc.

Foods which you can include in your routine on your gym day especially before entering your gym class includes fresh fruits, a good health drink or shake, fiber-rich foods which are easily digestible foods.

Those Embarrassing Situation for the Ladies

Sometimes a female fitness aspirant has to face some embarrassing situation that annoys them too much to continue with their practice or for the next day gym visit. Some annoying circumstances, that ladies generally faces during the workout sessions at the gym is the visible external appearance of their special body parts from their clothing drench into sweats.

This can really make you embarrass in front of your fitness coach or trainer. So to avoid such annoying things it is suggested to always wear sports bra and panty which are made with extra layers of spacer fabrics or elastic undergarments to keep your shapes in perfection and protected from those visible appearances. Also, it doesn’t get affected no matter how hard the practice session will go or how much you sweat.

Those Strange Looks of Other Gym Buddies

Another annoying incident that often people face or notice in the fitness center is those annoying or strange look of others while you practice on equipment or lift a heavyweight.

It really feels very uncomfortable when someone constantly stares you, like what you are doing, what is your next move, etc. causing you not to give your hundred percent effort and devotion towards your own fitness improvement.

So to deal with such a situation it’s better that initially you will choose a space which is quite far from the visibility of such annoying personalities. Still, if it persists then you can directly ask with them in a very polite manner that even though their intention is not wrong but their peculiar look is disturbing you, so kindly cooperate with you.

Yes, it is quite annoying if your gym trainer is mostly interested in flirting with you instead of focusing on his job. It hampers your fitness work and prevents you from practicing for an extended period of time even though you are willing to do so.

So to ease with such a situation you can make a polite conversation with your trainer or make him understand in clear words that you are only interested in your workout nothing else. You can praise them for their trainer work and make them understand this is the only thing you like about them not their flirting behavior.

This polite gesture can work in your favor if your trainer will be smart enough to understand your intention. However, there is no guarantee about human nature as every other individual have a different level of perception or thinking.

So if you won’t get any changes in the behavior of your said flirting trainer then you can directly talk without gym manager. They will really help you either by changing the timing of the said trainer or can assign some other trainer for your guidance.

Sweating is usual whether you are working out on cardio exercise equipment or during the strength training. This literally makes your underarms fully wet leaving those sweating marks permanently on your clothes.

This no doubt embarrass you in front of others and create an annoying situation leading to the distraction of your mind when you are supposed to focus on your exercise practice only.

So to deal with such issue you can wear wide arms clothing during your gym days so that the cloth fabric will not easily come in the contact of your sweat flow. Also, use sweat-absorbent talc in your underarms so that you will sweat too less that it could affect your clothes or leave any kind of marks on it.

Also, the talc will not let you embarrass due to the bad smell caused by excessive sweating from the body. Other than that you can choose a space which is close to the fan if you have an excessive sweating problem to avoid those annoying situations.

Commenting on Others Workout Practice

Some people have an annoying habit of passing comment on others during a workout where there is no need to do so. If you don’t think someone is doing the right posture or anything keep such things and your suggestion within you only.

No need to give such unwanted, free advice to anyone. Instead, you should focus on your own exercise practice. There is a trainer who looks everyone and guides them when requires. So don’t create such an annoying scenario either for you as well as for anyone else by accepting or giving advice or comments.

If these are the concerns that annoy you at the gym and hindering your fitness practice to the level as it should be then you must follow the above-mentioned advice or solutions that can protect you from getting annoyed with the problems in the gym.