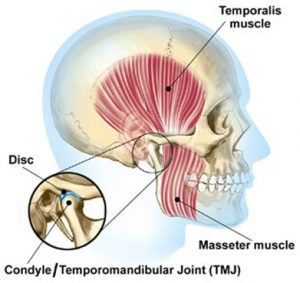 The temporomandibular joint (TMJ), which is responsible for the overall movement of the jaw, can all too often stir up a host of problems (interestingly, some of which are unrelated to the jaw). Problems that affect the TMJ stem from triggers that cause excruciating pain in the entire jaw, surrounding facial muscles and seemingly unrelated areas too.

These issues are known as TMJ disorder, TMJ disease, TMJ syndrome or simply temporomandibular joint disorder (TMJ/TMD). While known to cause awful ear pain and headaches, most of the symptoms associated with this disorder are centered on the jaw. Typically, jaw mobility gets severely disrupted, which causes muscle spasms, jaw locking and jaw popping.

The overall pain from a locked jaw can also spread to the neck and shoulders, which is why TMJ is classified as a musculoskeletal disorder.

Is TMJ Disorder on the Rise?

TMJ disease is slowly becoming an epidemic, as it has increasingly started to affect individuals between the ages of 20 to 40 years, and almost 20-30% of these individuals seem to fall prey to the triggers of TMJ. While it can occur at any age, some doctors believe that it affects most people in the prime of their life, and surprisingly more women than men.

The symptoms and causes of TMJ are often intertwined and may arise due to anxiety, abnormalities of the articular disc (which is inherently present to prevent friction between mandible jaw bone and the temporal bone of the skull), damaged TMJ ligaments, adoption of harmful habits and many more factors.

It is becoming extremely vital to understand what triggers TMJ and the importance of TMJ disorder treatment, which we’ll look at in greater detail below.

While the exact reasons for TMD are not yet fully understood, three major factors linked with the disease include:

TMJ syndrome is a dysfunction that can be passed down from generation to generation, be it from your parents or grandparents, and a misaligned jaw could be a hereditary concern, since our genetics define the positioning our teeth.

Often, either abnormally large teeth, crooked teeth, small teeth or any other manner of misaligned teeth that disrupt the functioning of the jaw could be a genetic imposition. Improper positioning of teeth can lead to an improper bite which can in the long run cause symptoms of TMJ that worsen over time.

The jaw’s mandatory function is ideally to allow ease of movement, making it possible to chew, swallow, and yawn, but due to sever stress and anxiety issues, people tend to form parafunctional habits that can elevate pressure on the jaw. Stress-induced anger can lead to constant clenching of the jaw and stiffening of the facial muscles, which definitely obstruct the positioning of your teeth as well as add pressure to the jaw bone and skull bone socket.

During stressful times, people also tend to sleep in wrong positions (sometimes facedown), where the load of the head places immense pressure on only side of the TMJ. This allows knots to form in the master muscle, and the compression of muscles can hamper blood circulation and bring on a shift in the jaw structure, causing muscle spasms and pain in the area.

Sudden jerks to the head or neck as a reflex to a whiplash injury may cause the onset of TMJ syndrome, forcing the muscles surrounding to jaw to overstretch and upset the alignment of the jaw. This causes dislocation and excruciating pain as an aftermath, often leading to TMD.

Whiplash from car accidents, sports injuries, blows to the head or even a punch to the jaw is known to damage the temporomandibular joint. Muscles in the neck and jaw can get severely affected by a sudden injury, often leading to tears in the muscles or supporting ligaments if they’re left untreated.

An understanding of TMJ symptoms and treatment reveal that the jaw is a super sensitive matter and needs to be handled with utmost care. Osteopathic Manipulative Treatment often works as an effective form of therapy for TMD well as various other muscles-related ailments.

Osteopathy is a form of drug-free treatment that aims to strengthen the musculoskeletal system (comprising of the spine and its surrounding muscles and joints) by positively affecting overall blood circulation and the nervous system. Simply by using hands-on therapy, certified osteopathy physicians can diagnose, prevent and treat injuries that cause significant jaw pain.

Osteopathy can help to treat the soft tissue structures that hold the TMJ together. It works all the muscles that aid in up-and-down or left-and-right movement of the jaw as well as (in technical terms) protraction and retraction from the masseter to the temporalis and lateral and medial pterygoid, which all play significant roles in overall jaw movement.

The physician initially analyzes the positioning of the spine, neck and head, and slowly moves on to the skull and the TMJ’s surrounding soft tissue, to understand where the pressure buildup and tension are situated. This helps them point out the area of imbalance that requires immediate attention, through either an active or passive examination.

Post a thorough examination session, the physician can successfully decide the necessary course of treatment, which varies from patient to patient. For the treatment to be effective, the overall musculoskeletal system needs to be assessed, for osteopathy involves addressing the true essence of an underlying problem, to best be able to solve it. With continued sessions the overall functioning improves as the movement of the TMJ gradually comes back to normal.