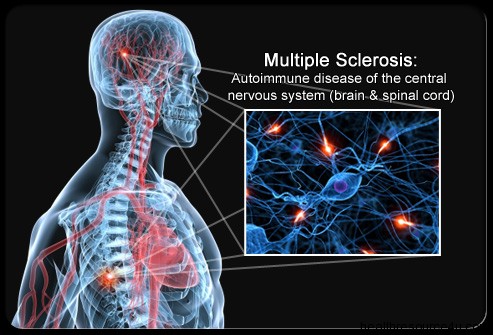 MS or Multiple Sclerosis is a dreaded disease. There is not cure for it and as symptoms progressively worsen, the patient faces more debilitation and loss of functionality.

Patients experience the first neurologic event characteristic of MS called CIS or Clinically Isolated Syndrome lasting for an entire day at least, Symptoms range from single to multiple lesions resulting in monodical or multifocal MS. Based on how the symptoms manifest themselves, there are 4 types of MS:

Primary Progressive MS: This kind is not common and generally occurs in 10 percent of people with this disease. Slowly worsening symptoms with no relapses or remission take place.

Relapsing Remitting Type MS: In this, there are temporary periods called release flare-ups or exacerbations where new symptoms come into play. This form of MS is most common affecting up to 85 percent of the people.

Secondary Progressive MS: In this symptoms worsen steadily over time. There may or may not be relapses or remissions. Most people with RRMS relapse into SPMS eventually.

Progressive Relapsing MS: This is a rare form of MS affecting less than 5 percent of the patients. Steadily worsening symptoms are accompanied by acute relapses without remissions and no recovery or some recovery.

When you have received a diagnosis of MS or an MS event, start taking treatment as soon as can be. MS damages more in the first year than later years.

Those with MS tend to have more symptoms between 20 to 40 years of age. These symptoms may worsen or come back. Some may get better.

This includes the following symptoms:

There may be a single symptom which may go away in months or years. Other problems can go away and never return. For some people, symptoms can come back or worsen in months. The severity of symptoms varies and many people have years of mild symptoms that come and go.

Symptoms are divided into three groups based on symptoms as primary, secondary and tertiary.

These are caused due to damage to the myelin sheath, a protective layer around nerves in your spine or brain. Damage leads to scarring which causes signals to not be able to travel between the brain and the body

Primary symptoms come from damage to the protective sheath (myelin) around the nerves in your spine or brain. The damage causes scarring, which makes it harder for signals to travel between the brain and the body.

Many people with MS have relapsing-remitting disease course, experiencing new periods of symptoms or relapses that develop over days or weeks in a partial or total way.

Causes of MS are unknown. This autoimmune disease is characterised by the human immune system attacking its own tissues. In the case of MS, this immune system malfunctions destroying the myelin which is the fatty sheet covering and protecting nerve endings in the brain and spinal cord . Myelin is like the insulation on electrical wires. If the insulation is not proper, the wire becomes damaged.

Certain factors increase the chance of developing MS. These include age ( MS commonly affects people between 15 and 60) and sex (with women twice as likely to get MS than the male gender). Family history also plays a role with parents or siblings with MS increasing your chances of developing the disease.

MS is also linked to the Epstein-Barr virus that causes infectious mononucleosis. Caucasians are at highest chance of developing the disease followed by Asian, African or Native American descent. MS is far more common in temperate climates including Canada, US and New Zealand as well as Australia and EU.

There is a slightly higher risk of developing MS in case you have a thyroid malfunction, diabetes type 1 or IBD.

There are no specific tests. But doctors rely on differential diagnosis instead. The doctor may physically examine and recommend spinal tap, brain MRI, MS MRI, Blood tests, tests to check for specific biomarkers, evoked potential tests and interveners infections to check lesions indicating the disease is in an active stage. Diagnosing MS can be tougher in persons with progressive disease or unusual symptoms. Additional imaging may be needed to confirm tests.

While there is no cure for MS, treatment options are available to decrease the frequency of relapse and delay disease progression. Treatment may use infections which are:

Medication may be given:

Injectable medicine namely beta interferons may be given for preventing relapse. Glatiramer acetate is given by injection. Oral capsules may be given:

Physiotherapy may be given to regain control over motor limbs and better movement. Physical therapy can also be used to manage the symptoms associated with loss of balance and coordination. Muscle relaxants may be given to the patient to ensure that he or she does not feel tightness in the limbs or lack of coordination.

MS is a long, chronic disease. Therapy and counselling are very important to provide support to the patient and his/her family and friends.

Multiple sclerosis is a debilitating condition and doctors are trying to research medicines and treatments to better manage this condition. With advances in medical science, maybe a cure for MS may finally be in sight one day.