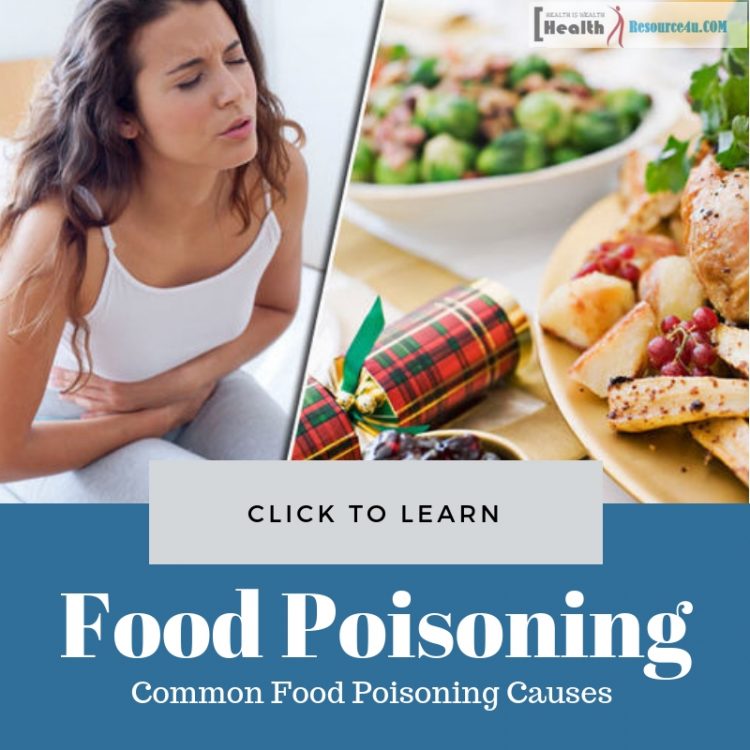 Food Poisoning is a food-induced bodily infection that generally occurs as a result of contaminated foods intake. Unhygienic food handling, meal preparation, and storage of foods under unsanitary atmosphere are the leading cause behind this illness or infection. However, there are some more common food poisoning causes that you’re unaware of.

Every year 1 out of 6 Americans get ill due to food poisoning. This show how easily people can develop this health issue and get unusual suffering for a very long duration if necessary care and attempt is not taken on time.

Though most of the food poisoning health issue get relieved on its own without any medical intervention, only by maintaining hygiene and other care for ensuring more hygienic lifestyle, still there are cases which need hospitalizing in order to relieve its chronic and persistent signs.

Its common symptoms include vomiting, nausea, diarrhea which started to occur just within an hour of the contaminated food intake. However how severe your symptom will be and when these will be started to reflect depends on your own immunity power, type of infection-causing bacteria, viruses, and parasites.

This is the reason the same food can cause food poising just within few minutes of its intake whereas in some people it shows its symptoms after one week or one whole day. People with some special condition contain high-risk factor for developing this health issue such as a pregnant woman, young children, infants, elders and people with very weaker immunity system.

People who develop the symptoms of food poisoning after a week or more than that have greater risk factor as it is difficult to identify the reason for the symptoms. However, it is very important to get immediate medical attention if vomiting and diarrhea persist for more than 2 to 3 days otherwise it can make the condition of the concerned patient more worst. 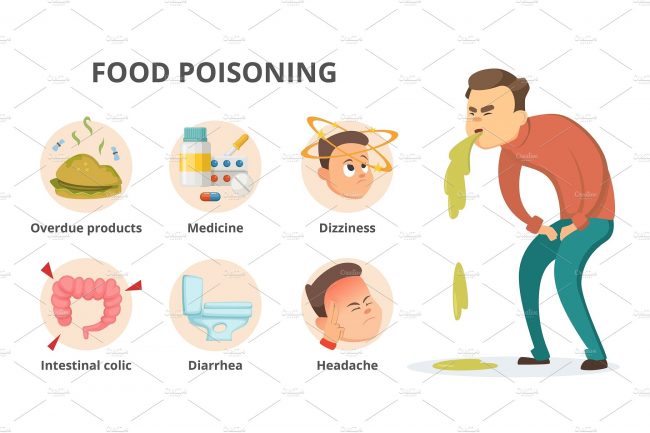 In most of the cases of food poisoning underlying issue is not detected because it disappears on its own without any active medical intervention. However when the underlying concern detected it includes the following:-

Some bacteria are harmful to the body and when consumed unknowingly via contaminated food or unhygienic food it can cause severe fever and other illnesses. Such bacteria include the following-

Salmonella- Salmonella denotes to a group of bacteria which grows in half-cooked or undercooked meat and eggs. Apart from these foods, this type of bacteria can also grow in melons, sprouts, and unpasteurized milk and other milk products such as cheese. Its symptoms may develop within 1 to 3 days after the consumption of the contaminated food and may last up to a week.

Listeria- Listeria is an abnormal bacterium that grows in a very cold temperature such as in a refrigerator. Some common sources of this type of bacteria include ice cream, unpasteurized cheeses, smoked fish, hot dogs, pates and deli meats. Its common symptoms include vomiting and diarrhea.

Listeria can develop some unique symptoms such as confusion, stiff neck, and weakness along with the common symptoms of food poisoning. Pregnant woman and people with weak immunity power can get sick even with the milder infection caused by this bacteria within a day. However, in the cases of serious infection, the symptoms may develop after a week or even after a month.

As a result of it when this prepared food is left for warming, new bacteria grows again leading to cause infection when consumed by people. It can develop its symptoms just within 6 to 24 hours of its consumption and usually get relieved within a few days. Beef, chicken, and gravy are some common sources of this type of bacteria-induced food poisoning.

Campylobacter- This type of bacteria grows in undercooked poultry, unpasteurized milk and even in water. Its symptoms started to develop within 2 to 5 days after the consumption of infected food.

However, it usually gets relieved on its own within 2 to 10 days after the food poisoning. In the cases of severe infection, it can cause bloody diarrhea which needs proper medical attention to get relieved. The infected person cannot transfer it to any other person in this type of food poisoning.

Some parasites can contaminate foods and water and when these are consumed by a healthy person or by a weaker person it causes food poisoning. The parasites are of different size and type ranging from single-celled organisms to worms such as tapeworm.

These parasites are easily visible to naked eyes. The parasitic food poisoning can cause mild to major forms of symptoms depending upon the intensity of infection. In certain cases, food poisoning caused by parasites may cause even death but these are the rare scenario.

It can easily spread in surfaces like kitchen floor or any other surface of your house if an infected person stays in your home. If someone touches the said contaminated surface and then puts an unwashed hand in mouth, then they can get infected.

In the cases of certain food poisoning, bacteria or other parasites are not responsible for the contaminations, the food itself contains toxins naturally. Foods rich in natural toxins include red kidney beans (toxins reduced or eliminated through cooking), shellfish such as oysters, clams, and mussels.

In the cases of food poisoning caused by natural toxins, the infected person develops symptoms within 10 to 30 minutes after the ingestion. Its symptoms include nausea, vomiting, diarrhea, abdominal cramp, dry mouth, confusion and loss of coordination.

In the cases of severe food poisoning caused by natural toxins, the symptoms may take time up to 24 hours to 3 days. People with already an existing major health issue or elderly people can die with this type of food poisoning if immediate medical treatment is not provided.

Mycotoxins refer to fungi produced toxic chemicals which can cause major health effects such as weaker immunity system without any specific reason, identifiable diseases and even death too.

This type of food poisoning toxins develops due to the consumption of fungal infected food by humans or the usage of the infected crop in the livestock. As this type of toxin doesn’t decompose or break down in the digestion so it can easily exist in the food chain either in meat or in dairy products.

A consumption of mushroom contaminated with mycotoxins can cause hallucination as well.

It is a toxin produced by the living bacterial cells in its surroundings. It can cause foodborne illnesses if a contaminated food or drink is ingested by a healthy person.

The worst part of this type of toxins is that even if the microbes that produce exotoxins get killed then also the risk of causing illnesses remains as it is. Its symptoms usually develop after 24 hours depending upon the quantity of ingested toxin.

The symptoms of food poisoning will vary depending upon its underlying causes responsible for this condition as well as it also depends on the internal health of the affected person. Usually, the symptoms are divided into two categories, mentioned below.

The symptoms of food position can develop as early as 1 hour after ingestion and maximum it takes 10 days and even sometimes longer than that. It particularly depends on the causes of infection. 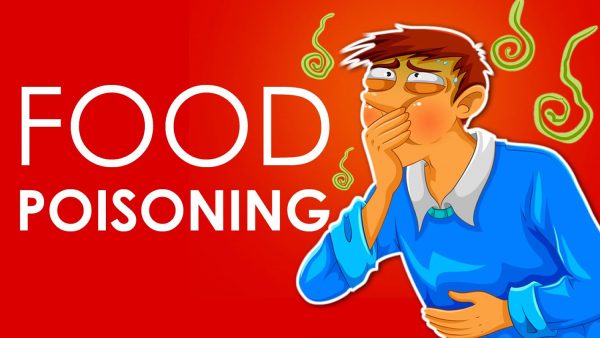 The treatment of food poisoning will vary depending upon the sources of this particular illness and the symptoms type and severity. In general, the food poisoning disappears on its own after a few days but in the cases of severe symptoms, it needs proper medical attention in order to get relieved it completely. Usually, the following treatment measures are taken by the doctors:-

The primary treatment aim of food poising is to recover the lost fluid portion from the body. During the persistent diarrhea period, your body loses an immense amount of fluid and electrolytes which is the source of calcium, potassium and sodium minerals resulting in weakness and other issues develop.

However, this is well replaced by saline and other methods so that your health can be maintained to a stable position. Children and adults with persistent diarrhea need to be hospitalized immediately where salts and fluids are given to them intravenously in order to relieve dehydration.

In the cases of severe symptoms developed by a patient, where food poisoning is caused by a certain bacterial infection, antibiotics are prescribed by the doctors to control the condition. Food poisoning caused by the listeria bacterium is treated by intravenous antibiotics.

In such cases, immediate hospitalization is required. As early the treatment begins it is safe for the victim as their early recovery chances increases. In the cases of pregnant women, immediate antibiotics treatment is given to the victim so that the infection would not affect the baby.

Antibiotics don’t work on food poisoning caused by viruses, in fact in certain cases it can make the condition more worst. So it’s better to discuss the best treatment option with the doctor for you. Certain medications you can avail at drug store very easily for combating the symptoms of food poisoning where a victim (adult only) has not developed fever or bloody diarrhea. However, it is always suggested to consult with a doctor before taking any medication.

Prevention is the key to eliminate any minor to major health risk and that is applicable for this health issue as well. Some precautions in your day to day life can protect you from the dangerous consequences of this health issue by preventing its growth risk.

Contaminated food or water is the primary sources responsible for food poisoning or infection. So to prevent this concern it is very necessary for every individual to maintain full hygiene while cooking or preparing foods. Clean the utensils, vegetables, etc. thoroughly before cooking.

Wash your hands thoroughly before cooking food. Wear clean cloth or apron while cooking. Avoid the contact of food to your cloth or any other body part while cooking. Keep the kitchen surface clean to avoid the growth of parasites or microorganisms.

Avoid cooking during illness or if you suffer from diarrhea or vomiting. Buy vegetables or fruits from a clean and fresh market to avoid the ingestion risk. While buying packaged food check its seal is unbroken or not. Use the products before its expiry date and then throw it once its expiry date is over.

Just like the hygiene maintenance is vital while preparing foods, equally the hygiene is necessary to maintain while handling prepared food. Wash your hand thoroughly and use a sanitizer before and after eating a meal as bacteria or other parasites can easily grow in dirty hand and body. So when you eat or handle food with those unclean hands you are more likely to get a victim of food poisoning.

A weak body or a person with weaker immunity system is more likely to develop food poisoning health issue. So it is very crucial that you eat a highly nutritious and balanced diet in your day to day life so that even if you get affected by the food poisoning it won’t affect your health much.

As food poisoning is a very common health concern which can affect to anyone or at least once in life either in a mild or chronic form so it is crucial to have knowledge of common food poisoning causes that you’re unaware of or which are less popular than the common reasons for this health issue. However, it is advised to maintain the prevention steps in order to keep you and your family safe.