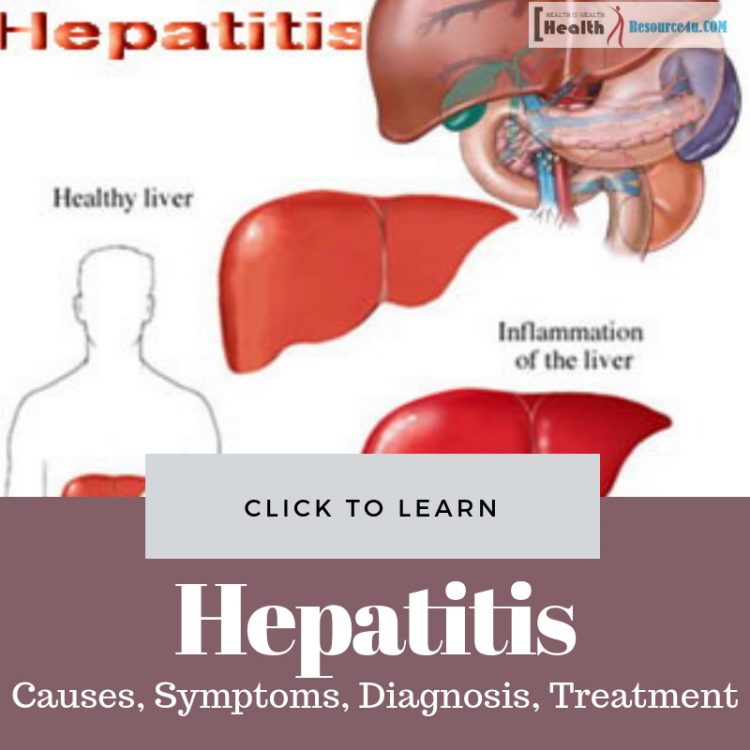 Hepatitis is an inflammatory condition of the liver caused by certain viruses attack on it. This affects the overall functionality of the liver and if remain untreated for longer duration can cause major damaging to this vital organ. So it is very crucial that the symptoms of hepatitis should not be ignored and its patient should go for necessary diagnostic tests.

Hepatitis caused by viral infections are divided into five types such as Hepatitis A, B, C, D and E. Out of them, Hepatitis A and E are acute and other remaining three are the chronic one whose growths are an ongoing process. In the cases of pregnant women affected with Hepatitis E, it turns to be chronic.

Apart from viral infection other causes of hepatitis or liver inflammation includes autoimmune response, medication’s side effect, excess alcohol consumption, intravenous drugs and due to toxins. The treatment procedure of hepatitis depends on its underlying cause or type of hepatitis. Many lifestyle changes can prevent its growth risk to a great extent if adhered seriously.

The liver is one of the vital organs of the human body which lies in the right upper side of your abdomen. It performs important functions which are required for a healthy body survival and its growth. Some primary liver functions are mentioned below:

Mostly these chemicals are broken into smaller sizes or attached to other chemicals in the body. After that, it is eliminated via urine or stool to ensure purified blood supply all over the body.

In the cases of inflamed liver or hepatitis, all the vital functions of the liver get disturbed badly and develop minor to major symptoms depending upon the type of hepatitis.

Hepatitis A is caused by the consumption of foods or drinks contaminated with hepatitis A virus. This is an acute form of hepatitis and a very common one too. As this doesn’t develop any major symptoms so mostly it automatically relieved without any intervention of medical treatment.

This type of hepatitis doesn’t cause a long term inflammation or infection of the liver just like other types of hepatitis so it is considered as less risky. Taking vaccine for hepatitis A can prevent its growth risk. Also, hygiene should be maintained especially if someone visits in urban countries or regions where sanitation level is very low.

Hepatitis B is more chronic in nature. It can easily be transmitted from one infected person to a healthy person via sex, through the use of the same injection for taking street drugs, or through hepatitis B, virus-infected blood transfusion. Apart from these conditions, sharing a razor used by a hepatitis B virus infected person also increases the risk of developing this type of inflammation in the liver.

Mostly hepatitis B diapers with a thorough long term treatment. However, in a certain number of cases in spite of complete disappearance of its symptoms its patient get becomes a carrier means they contain the risk of spreading hepatitis B virus to others.

Hepatitis C is the most common viral infection in the United State. This type of hepatitis is caused by the direct exposure of hepatitis C infected fluid in the body such as via sex, through an infected blood transfusion, through injections used for taking illegal drugs or for making tattoos. Also, it can spread from an infected mother to her child during birth or afterward through breastfeeding.

In certain cases of hepatitis C, you won’t get any symptoms at all or will develop mild symptoms. However, in the cases of chronic hepatitis C, it can cause Cirrhosis which is major scarring of the liver.

It is contaminated through the contact of hepatitis D virus-infected blood, via sex, and from an infected mother to her child. It makes the Hepatitis B much more severe than its actual form. It is also known as delta hepatitis. It is the rarest type of hepatitis in the United States.

Just like Hepatitis A, Hepatitis E spreads through contaminated foods or drinks consumption. This type of hepatitis develops in areas with a poor level of sanitation mostly in middle-east countries. It is mostly spread through ingesting fecal matter that contaminates the water bodies. This is why it is also known as waterborne disease.

Apart from this viral hepatitis, there is some non-viral or noninfectious hepatitis which grows due to other reasons apart from hepatitis viruses attacks in the body.

Sometimes hepatitis grows as a result of the autoimmune system response to the body. Under such condition the immunity system of the body mistakenly considers the liver as a harmful object for the body resulting in it attacks it leading to ongoing inflammation.

It can cause mild to major forms of symptoms affecting the different functionality of the liver. This type of liver inflammation or hepatitis is much more common in women than in men.

Alcohol and Other Toxins Intake

Among the noninfectious hepatitis excess, alcohol consumption is the more common reason for its growth. The excessive doses of alcohol can cause major liver damaging and inflammation that interrupts different functionality of it.

This type of hepatitis is also known as alcoholic hepatitis. Initially alcohol injures a small number of liver cells and in the long run, it causes more severe damaging leading to Cirrhosis and liver failure develops by thickening and scarring of the liver walls.

Apart from alcohol other toxics products which can cause liver inflammation include exposure to poisons, overdoses of medications, etc.

In the many cases of viral hepatitis, the patient develops very few symptoms or in some cases no symptoms at all. However, if they develop symptoms then it looks very similar as it is the symptoms of flu.

In the cases of chronic hepatitis such as hepatitis B or C, the symptoms started to develop in the very later stages when damages started affecting different liver functions. On the other hand, the symptoms of acute forms of hepatitis develop faster.

The symptoms of chronic hepatitis are too mild to get noticed in the eyes as its symptoms develop slowly, so its diagnosis is often delayed.

Anyone who is developing the symptoms of hepatitis should go for an early diagnostic test without making further delay to prevent further liver damaging and its overall functionality. Following test are commonly done to diagnose hepatitis.

The first step for diagnosis of hepatitis will be your physical examination. In this point, your doctor will ask about your medical history to analyze whether any existing health condition or past health problem is responsible for your infectious or non-infectious hepatitis or not.

Blood sample of the patient is taken for testing in the laboratory to analyze whether the liver is functioning normally or not. The existence of excess liver enzymes if detected in these test indicates that your liver is not working properly or it is unusually stressed or damaged.

If any abnormality is detected in the liver function blood test then some more blood tests are recommended by the doctors to detect the sources of your liver problem or issue. These test can easily detect the types of viruses in the cases of viral infection. Also, it can detect antibodies if liver inflammation is developed as a result of autoimmune disease.

An ultrasound test is recommended by the doctors if they detect any abnormality during the physical examination of your abdomen or in blood test reports. In this imaging test, ultrasound waves help to create images of internal organs of the abdomen. It helps to have a close view of your liver and its surrounding organs.

Liver biopsy is an invasive procedure in which a tissue sample from the liver is taken to detect abnormalities. It can be done through needle insertion in the skin or it may require small surgery to get some sample tissues. The biopsy is conducted with the help of an ultrasound imaging test which guides your doctor to reach the targeted areas in the liver. This test clarifies in more precise form the extent of liver inflammation or damage which is very important to start the appropriate treatment procedure.

The treatment of acute and chronic type o hepatitis are different. However, the aim of all the treatment revolves around relieving the different symptom a patient is developing and to restore normal liver functionality as in its normal stage.

The aim of the acute form of hepatitis treatment is to relieve its common symptoms such as abdominal pain, nausea, and vomiting. In this condition of a patient, medications are given with utmost attention and in very low diseases as it can cause a negative impact in the liver.

As because the liver is not functioning well so chances exist to a great extent that the provided medications can accumulate in the blood or can convert into toxic material in the lack of drugs elimination by the damaged liver.

This is the reason medications are administered closely and only necessary medications are prescribed to the patients. Also, the consumption of alcohol or illegal drugs are strictly prohibited because it is extremely bad for liver health can make the condition of the patient more serious.

In the cases of a patient who are developing severe nausea or vitamins should be admitted into the hospital where they are provided with intravenous fluids to prevent the dehydration condition. These treatment procedures help to clear viruses responsible for this type of hepatitis.

The treatment of chronic hepatitis such as hepatitis B and C is done through medications or a combination of different medications to clear the responsible viruses.

The removal or elimination of viruses helps to improve the liver condition and prevent its further damaging risk. This prevents the risk of liver scarring, liver cancer, and cirrhosis which are more risky conditions.

Also, alcohol consumption must be avoided in this condition because alcohol can more elevate the liver-damaging leading to faster growth of cirrhosis. Also, smoking can elevate liver damaging risk so must be avoided.

As chronic hepatitis is a more complicated condition so its treatment must be done under the supervision of specialist trained doctors such as hepatologists and gastroenterologists.

In the cases of autoimmune hepatitis, drugs are prescribed to the patients for suppressing immunity systems. These immune-suppressing drugs may or may not be backed by the suppressants.

For hepatitis caused by alcoholism or due to high doses, illegal drugs or toxins can only be treated if these responsible substances consumptions are stopped completely. Medications are prescribed to ease different symptoms caused by this type of hepatitis.

Certain medications can also cause hepatitis disease as its side effect which progressively causes liver damage. If this is the reason for hepatitis then the consumption of those medications must be stopped immediately and alternate medications should be prescribed in its place.

Hepatitis is a major health issue and it contains the risk of liver failure or other kinds of liver damaging risk. So it is very important once you notice the symptoms of hepatitis you immediately take necessary measure to prevent its dangerous consequences on your overall health.