IUD stands for Intrauterine Device which is a most prominent birth control measure and often recommended by the health specialists because of its high safety value and effective features for the women who want to delay their pregnancy. It is its special versatile benefits of IUD birth control method which has made it so popular worldwide.

It comes in T shape and remains little bigger than a quarter which fits perfectly inside the uterus. It helps in preventing pregnancy by stopping the male sperm from reaching it to female eggs which can easily fertilize an egg by merging with it.

Basically, IUD is available in two forms or types such as Copper and Hormonal IUD. Each one of them carries specific benefits and features which goes by an individual’s need and requirement.

A plastic string remains attached to IUD so that it can be easily removed at any point as per the requirement and also for ensuring that it is placed correctly in the uterus. This is one of the most long-lasting or long-acting contraceptive methods.

Because of its easy removal feature, it is known as the most easier form of a reversible birth control method. It contains very minor side effects risk and the chances of major side effects are a very rare scenario.

How you can get benefited by having an IUD birth control, you will better understand by going through the below discussion of each and every vital aspect of this birth control measure.

In the United States at present two types of IUD are found (Copper and Hormonal) which covers around 2% of total birth control measures used by the women over there. Similarly, these IUD types are equally popular in other parts of the world as well as a reliable contraceptive method for preventing unwanted pregnancy.

Hormonal IUD comes in three brands such as Skyla, Mirena, and Liletta. After the placement of this form of IUD in the woman’s uterus a hormone naming Progestin is released slowly into the uterine lining. This hormone is very much similar to progesterone a natural hormone.

The progestin hormone makes the cervical mucus thicker than its normal state so that any sperm would not enter the cervix easily. Also, it reduces the growth process of the uterine lining hence creates an unfavorable place for the attachment or implantation of a fertilized egg.

Just like any contraceptive pills, even the hormonal IUDs can prevent ovulations means stops the release of an egg from the woman’s ovary. The other benefit of the hormonal IUDs is that it makes your period flow lighter and reduces period cramping intensity.

Women who use Liletta and Mirena may experience relief from their period entirely. After the insertion of IUD, the period date and motion will remain unpredictable for the initial six months.

Apart from all these advantages, the hormonal IUDs contain some side effects risk which may or may not happen just like any other birth control measure such as weight gain, acne, headache, nausea, mood swings, breast tenderness, and breast soreness.

Copper IUD is another form of IUD which provides long term relaxation to the person who chooses this type of birth control measure. ParaGard is a type of copper IUD which remains wrapped in the copper wire. The copper IUD prevents sperm from reaching an egg by obstructing its way in the fallopian tubes so that it won’t be able to fertilize an egg.

Once it is inserted in the uterus it prevents unwanted pregnancy risk for the next 10 years. This type of IUD is also effective in cases where any woman has unprotected sex. In such cases, it works as an emergency birth control measure.

If anyone missed taking their contraceptive pills or have unprotected sex that is without using any type of protection then in such conditions an IUD proves hundred percent effective if it is inserted within 5 days of these phenomena for preventing pregnancy.

Apart from these side effects risk some other common side effects associated with ParaGard include vaginal discharge, backaches, pain during intercourse, anemia and spotting between periods. 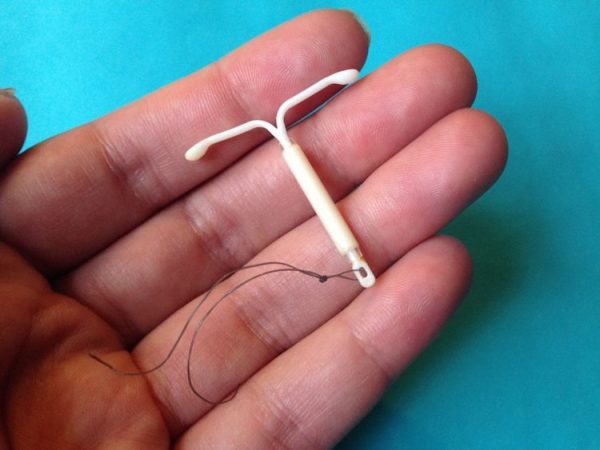 Just after the insertion of an IUD by a doctor, you may feel lightheartedness for a very few minutes but that goes off by own without any intervention within a few minutes.

In the initial few days after insertion, you can feel cramp-like you have in the period which also may or may not happen. Pregnancy is almost impossible once an IUD is inserted in the uterus. Still, if this happens in any case then the chances of infection, miscarriage and early labor and delivery remain too high.

If after the insertion of IUD birth control measure if by chance pregnancy happens then the risk of ectopic pregnancy remains quite high if a fertilized egg implants itself outside of the uterus.

In the cases of vaginal bleeding, belly pain and symptoms of pregnancy the patient should immediately contact the doctor in order to prevent major health risks concern.

As per one research report, 1 out of every 10 IUD women develops ovarian cysts in the very first year of insertion of this birth control measure. However, this cyst is generally harmless and goes away on its own just within 3 months without any medical intervention.

Still, there are some cases where women experience cyst ruptures which causes severe pain concern. Also, some women notice swelling, pain in the lower abdomen area and bloating problem. If such problems develop then in those cases immediate consultation and treatment by a doctor is a must.

In the very rarest scenario, an insertion of IUD can cause perforation that means the inserted IUD will poke the uterus wall as it is placed in it. If this happens then a doctor will remove the IUD for ensuring the patient’s safety and health.

As insertion of IUD increases your likelihood of developing Pelvic Inflammatory Disease or PID to some extent. A PID is a type of uterus, ovaries and Fallopian tubes infection. Its symptoms include smelly vaginal discharge, belly pain, heavy bleeding, pain during sex, fever, and chills.

If these symptoms are noticed by anyone then immediate treatment should be given to the patient in order to prevent more serious issues associated with PID.

The overall costing of an IUD birth control measure is much lesser than other types of reversible birth control methods. With single time expense, it offers safety and pregnancy prevention for as long as for the 10 years which is quite satisfactory.

The costing of Hormonal IUDs is greater than the Copper IUDs. The costing of such IUDs and its insertion change vary from clinic to clinic based on their specific services and rules.

In general, an IUD cost which includes both the examination of the patient plus insertion charge comes around $0 to $1000. Some insurance policies even give coverage to IUD. So depending upon your coverage the costing of an IUD can vary.

The IUD insertion process is completed just in one visit to the doctor’s clinic. A doctor may suggest you take an over-the-counter medication before the few hours of the processing in order to relieve the cramping.

You may experience cramp and bleeding for the initial few days after the insertion of an IUD which goes away automatically. Though you can have an IUD at any point in time of your cycle however it will be most comfortable if insertion is done during the period flow days as at this point your cervix remains quite open so you have to face lesser pain and difficulty during its insertion procedure.

How is an IUD Removed?

Just like the insertion of IUD even its removal is done at the doctor’s clinic just in a single visit and even in much lesser time. The IUD birth control method removal process takes only a few minutes time of yours. Your doctor will ask you to keep your feet in stirrups and then he or she will use forceps in order to pull this out very slowly.

Little bit bleeding and cramping may happen during the procedure however this will go away just within one or two days. At any circumstances, a woman should not try to remove an IUD by own as it can even cause serious damaging. It must be done a professional only.

A doctor can even remove an IUD in a very simple way just by pulling its string in a very safe manner at a definite angle. If the patient wants to have another IUD then just after the removal of the previous IUD the new one can be inserted then and there only without any further waiting.

In very rare cases cervix dilation is required where a grasping device is used in order to free the IUD. If this happens then a local anesthetic is given to the patient. Again in a very rarest scenario, hysteroscopic surgery may be required where a very small telescope is used which helps in the removal process of IUD.

No doubt the benefits of IUD birth control are truly appealing and reliable, still, it is suggested that you must have a clear discussion with your doctor regarding every aspect of this birth control method before choosing it for you.