You are here: Home / Health & Wellness / Women Health / Linea Nigra: When and Why It Appears and Tips to Deal with It

Pregnancy comes with different signs or symptoms as the journey progresses towards its maturity. In this series of progression in the very beginning of the second trimester, one common bodily symptom appears on the abdominal areas of the pregnant lady known as linea nigra.

Reason of linea nigra appearance on the belly is not something that requires particular treatment. It is as natural as any other symptoms of pregnancy also known as pregnancy mark. However, the best part of this pregnancy sign is that it doesn't cause any traumatic effect like pain, itching or any such discomfort like other prominent pregnancy signs.

Along with your increased abdominal size, the appearance of this pregnancy sign gets darker with time. This dark vertical line develops and runs from the belly button to the pubic bone. However, it can also run from the umbilicus towards the same alignment with the rib cage.

The linea nigra can also appear in the same vein in the vaginal area and areolas. It looks in the lighter brown shade to little darker pigment or almost black but not completely black.

This line already remains present in the belly before your pregnancy itself but in a very lighter tone that makes it invisible. In this state, it is known as linea alba in which alba means white in the Latin language.

During pregnancy when this line gets darker then it is called linea nigra in which nigra means black. However this line actually gets brown, or in much darker pigment look almost black but it never gets completely black.

The size of linea nigra varies between ¼ inches to ½ inches wide. This dark vertical line may even appear in your vagina and areolas in the same vein which appears vertically down from pubis to the umbilicus.

This pregnancy line also clearly defines or reflects the separation of your abdominal muscles on each side of the torso due to increased uterus size.

The linea nigra also indicates the separation of the abdominal muscles on each side of your torso, due to the growing uterus. There is no definite point when you will develop the linea nigra pregnancy mark but between the second and third trimester of your pregnancy journey, these lines are much expected to appear in its much darker and easily visible form which automatically disappears after the childbirth.

When Does Linea Nigra Appear on Your Belly?

Linea nigra is a 6 to 12 mm darker line that that runs vertically from navel to your pubic bone during the pregnancy journey. This is also known as pregnancy mark which gets noticeable during the second trimester of pregnancy and started to get fade after your baby’s birth.

Some women notice this pregnancy line quite later in their pregnancy whereas in some women this line doesn’t reflect at all. However, those who develop this line gets it in the visible position from their 4th or 5th months and gets darker as the belly size increases or expands with time.

Usually, the linea nigra develops from the pubic bone to the belly but in some cases, it may develop up to ribs. This line used to remain in your belly since the beginning but not in the noticeable state.

This is absolutely a harmless skin condition that grows in your belly during pregnancy due to structural and hormonal changes in the body. However, this can be a cause of concern for those who absolutely unaware about this and consider this as some health issue with a belief that it is harmful.

Linea nigra or black line though usually appear in the second trimester but it can also appear even earlier than this time. This ½ to 1 cm wider line gets darker with time but never gets black as its name usually denotes.

Why Does Linea Nigra Appear on Your Belly? 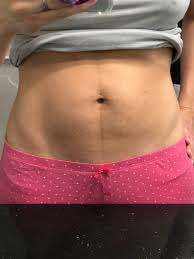 Hormonal changes play a major role in causing bodily changes during the pregnancy period. During your pregnancy journey, the level of estrogen hormones remains in its peak which causes the growth of melanocyte-stimulating hormones produced by the placenta in your body responsible for darker tones.

Resulting in certain areas of your skin gets darker than its normal shade. This effect remains high on your abdominal area special the big vertical line that intersects your belly turn to get brown and even more darker shade but never gets black as its name suggest linea nigra.

Apart from this pregnancy line that is linea nigra some other area of the body to gets more darker because of extra melanin production caused by increased estrogen hormones such as your nipples, labia, and clitoris.

This pregnancy mark is quite a normal phenomena and it does not cause any harm to your body or health. So there is nothing to worry about it.

What Does Linea Nigra Actually For?

As per the midwife linea nigra is absolutely a normal condition and occurs due to hormonal level changes in the body that cause dark pigmentation over the vertical line in the belly.

This pregnancy line or sign helps a growing or evolving baby to find the path towards the mother’s nipple. The effect of melanocytes stimulating hormone also appears in the expectant women’s nipple which turns to get darker with time.

Hence the growing baby easily locates the breast for breastfeeding in the future. So this can be said as the primary function of this pregnancy line that is easy localization of darkened areola for latching on.

Tips to Deal with Linea Nigra During Pregnancy

There is no specific way to remove this pregnancy line permanently unless you give birth to your baby. However certain home remedies and tricks can make your life much easier even with this pregnancy line that is linea nigra by making its shade less dark.

As per the health specialists, the darker linea nigra from its usual darker tone reflects that your body is lacking with a sufficient amount of folic acid.

So to diminish its darker tone you should eat those foods which can easily fulfill the scarcity of folic acid such as whole grains, cereals, oranges, and green vegetables in more quantity.

Taking food supplements can also prove effective in filling the scarcity of folic acid in the body which will further reduce the darker shade of your linea nigra appearance. Also, folic acid or folate intake prevents the risk of spina bifida defect.

Cover Up with Clothes

Wearing those clothing which can easily cover up your baby bump can help you in hiding this darker line on your belly if you are uncomfortable in exposing this to others especially when you go out.

Also, full coverage clothes provide enough protection to your bump from sun rays damaging which can cause darker shade of your pregnancy mark.

This protection is vital even after the baby birth otherwise it will not let your pregnancy line to reduce its darker tone for getting back to its original lighter shade which remains invisible.

You can apply pure cocoa butter or a lotion rich in cocoa butter on your belly area over the linea nigra which over the time will help in reducing its darker shade. Apply this home remedy every day and let it get absorbed in your body.

Sun’s harsh UV rays are no way safe for your skin. This is the reason it is very crucial that you provide full protection to your belly from the direct sun exposure otherwise the linea nigra or black line and even your abdominal area can get much darker than its normal shade.

Apply sunscreen over your belly as well especially when you go out to keep it protected from sun rays which can cause discoloration in your skin. Try to avoid going out in the afternoon and if it is important then always prefer wearing dresses that can cover your bump fully.

Also, use an umbrella whenever you go out in the day time. These small-small steps can help you in preventing this dark pregnancy line from getting much darker.

Just like the cosmetic products hides your bruises and facial flaws in a very fine way similarly it can temporarily hide the appearance of linea nigra on your belly.

Makeup is the easiest way to quick fix this darker pregnancy line if not for longer duration but at least for sometimes especially when you go out from your home.

You can apply a foundation to conceal this line in a very moderate amount otherwise if you will use it excessively it will look quite odd than the normal. While choosing makeup product for your linea nigra always choose those cosmetic products which are rich in gentle ingredients so that it won’t cause any kind of harm to you and your baby as well.

Always avoid the usage of bleaching creams especially those rich in hydroquinone as because at this point your skin gets very delicate so it can easily absorb anything hence you have to suffer from its adverse effect. So be very wise while choosing cosmetics for hiding your linea nigra.

You can apply the rubbing alcohol or lemon juice over the linea nigra which are known for their skin lightening properties. The application of lemon juice on frequent basis works very effectively in reducing the darker shade of this visible pregnancy line in a much safer and natural way.

Similarly, the rubbing alcohol also diminishes the size and appearance of this dark pregnancy line. However, the application of rubbing alcohol can also develop irritation in some people so it is advised to take patch test first over any other bodily area and if everything goes right then and only apply it over the linea nigra to get its positive result only.

Does the Linea Nigra Help in Predicting Baby’s Gender?

There are a very old belief and many old wives tales that suggest that one can determine the gender of her baby with certain pregnancy symptoms. Linea nigra is one of those symptoms which can help in identifying the baby gender even though it is not backed by medical science.

As per this belief if this pregnancy line extends downwards from the navel to the pubic bone then it indicates for having a girl child. The cases where linea nigra heads towards north from navel to your head then it usually indicates for a baby boy.

These indications can be correct and even prove false in some cases still this belief is very popular and many people even have faith in them.

Does the Linea Nigra Disappears?

One very common query that most pregnant women have especially in those who are first time pregnant in their life that whether this visible, dark line will go off after the baby’s birth or not.

If you are the one who is worried about the appearance if this visible dark line on your belly then it’s time to relax because there is nothing to worry about this line as it will automatically disappear gradually once you give birth to your baby without your any intervention.

After your baby’s birth, this line fades away little and within a few months, it disappears completely. Still, if you have any confusion regarding this line you can ask your queries from your doctor or midwife.

The reason of linea nigra appearance is very natural just like any other physical changes during the pregnancy time. So it’s time to rejoice your journey and leave everything on time which will naturally diminish and remove this unpleasant pregnancy mark over time.