Implantation bleeding happens when a successfully fertilized egg attaches itself to the lining of the uterus and breaks small veins in this procedure. It can be a prominent sign of pregnancy which may or may not noticed by the concerned woman. However, it is not necessary every pregnancy must have implantation bleeding.

The implantation bleeding is the first sign that can confirm your pregnancy report even before a pregnancy test kit confirms a pregnancy. However, it is always suggested to consult with a doctor before confirming about your pregnancy by own.

Though implantation bleeding is a normal condition and it doesn’t indicate any health concern, still in certain cases it needs to be consulted with your healthcare specialists.

During your conception, your partner’s sperm fertilizes your egg which is known as an embryo. This fertilized egg or embryo travels through the fallopian tubes to the uterus. After entering in the uterus it looks for a suitable spot where it can implant itself.

While implanting itself to the uterine wall some blood vessels may break leading to light bleeding may occur in the very initial stage of pregnancy. Implantation bleeding usually happens approx. 5 to 10 days after conception. It may be around one week after your ovulation and a few days before your normal period date.

The color of implantation bleeding can be light red or pink or brown as well. The affected blood vessels get healed automatically after some time. After the completion of the implantation process, the attached embryo will stay in the same spot or area throughout the 9 months of pregnancy journey to progress into a newborn baby.

However, the implantation bleeding no way causes any kind of issue to the growing baby. As implantation bleeding happens just before a few days of normal period date so some women consider that their period has occurred little earlier in this particular month and remain unaware of their pregnancy news.

However, it is not a very common scenario that an implantation bleeding will happen before this one week range or window or after this one-week timing or after a missed period date. If so happen then the implantation progression rate remains very slow. 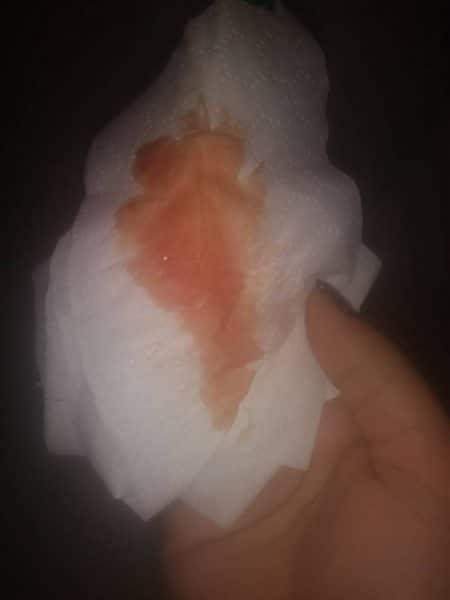 The implantation bleeding looks a little bit different than the normal period bleeding. However, in this context, it must remember that every woman’s bleeding flow and appearance is different than one another.

Some women have heavier flow whereas some women may have unpredictable flow. Still on an average period flow looks, in general, can be considered to mark differentiation between both types of bleeding.

The implantation bleeding appears as spotting light in color and texture. The flow of blood remains very light that it needs a very thin or light pad. The implantation blood color will depend on the timing this blood has taken to come out of your body.

Under the cases where you are experiencing heavy spotting or blood flow or clotting then you should immediately consult with a doctor as this could be an early-stage miscarriage sign.

How long it last

Usually, implantation bleeding lasts for a few hours to three days maximum. In the cases of first pregnancy, women are more likely to develop implantation spot or bleeding. Whereas women who are at their second or third pregnancy their chances of getting implantation bleeding remains less because their body is more accustomed or get used to for the embryo attachment in the uterus.

This early-stage pregnancy symptom is quite a normal condition and there is nothing to worry about it. This light and short term bleeding occur about 10 to 14 days after conception which is very much close to your period date which you have missed for the said month.

However, even in normal period days spotting is a common phenomenon in the beginning day or starting day. However, there are some crucial differences that can streamline a difference between these two different types of bleeding or spotting.

There are some prominent differences between the implantation bleeding and the period bleeding which will let you better understand whether you are pregnant or not before any test on home pregnancy test kits result.

The implantation bleeding happens due to fertilized egg attached to the uterus lining so it doesn’t last for the longer duration just like a normal period bleeding. At any condition implantation, bleeding will last for a few hours to maximum 2 to 3 days.

On the other hand, a normal period lasts for 3 days to a maximum of 5 days and in some cases 7 days not more than that. Women who are on contraceptive pills will bleed for a very shorter duration than the women who are not taking these birth control pills at all.

The implantation bleeding or spotting vary from light pink to dark brown or rust-colored. This simply looks different from the regular period bleeding or discharge color.

Most women remain familiar with their period bleeding whether it is light or in heavy discharge. Usually, the period's bleeding looks bright to dark or vibrant red.

On the other hand in the cases of the normal menstruation cycle, your bleeding flow may start with off light red color and then it gets heavier as the days pass on. The flow of discharge remains consistent in the case of normal period bleeding and lasts for 4 to 7 days.

You may feel a little bit cramping in your lower abdomen area due to embryo attachment to the uterus lining while starting the pregnancy journey of baby’s growth. However, the pain will remain too light and it doesn’t get intense even after some time.

On the other hand in the cases of the period, you will start noticing cramping even the actual period flow starts and the cramp intensity may increase as the days passes on which is the clear cut sign of normal period flow, not pregnancy news.

Clotting in between the period flow is quite a normal incident and many women notice this in their period cycles. However, there are cases where women do not notice much spotting in their period days.

If we consider implantation bleeding there should not be any clotting sign at all. So if you notice clotting along with your bleeding this means you are bleeding normally and there is no implantation happened.

The Necessity of Pads or Tampons

The implantation bleeding is usually a spotting or a very light blood flow which doesn’t require any tampon or pads to use. As this flow is inconsistent so you might even remain unaware of such spotting or bleeding.

In the cases of normal period bleeding or flow the necessity of using pad or tampon is must which you need to change on a regular basis as the flow remains consistent and get intense with time. On the other hand in the cases of implantation bleeding your tampons or pads will remain unfilled or dry enough.

When to consult with a doctor?

Now you must have a clear understanding about implantation bleeding like what it is actually, when it happens and how long it lasts. So it is now time to make you understand at what circumstances you need immediate consultation with a doctor for the sake of your health and well being.

Though implantation bleeding during the very initial phases of pregnancy is normal, still it is always advised to consult with a doctor to discuss your symptoms whether you are pregnant or not.

Any abnormal bleeding means other than your usual period days and bleeding appearance different than the normal period flow must be discussed with the doctor to have a clear idea about your actual health as it can happen for any reason rather than your early pregnancy symptom.

The cases where you notice heavy flow during your early pregnancy stage you must visit a doctor as they will analyze and let you know the real cause of such heavy bleeding which can be other than the implantation bleeding.

Accordingly, they can prescribe for medications and suggest for your daily care routine to ensure you and your growing child remains in a healthy and risk-free position.

If you have done the home pregnancy test and it shows a positive result then also you must visit a doctor to reconfirm this news and for their guidance for better and stable prenatal care.

Apart from implantation bleeding some other vital causes of bleeding during the early stages of pregnancy includes ectopic pregnancy, molar pregnancy, infections, cervical issues, having sex, threatened abortion and even complete miscarriage.

These are all very risky conditions and need immediate attention and treatment. So on the basis of these other causes of bleeding during the initial stages of pregnancy, the risk intensity will depend.

Under both the condition whether you are noticing abnormal bleeding in an unusual time and flow or in the cases of positive home pregnancy tests report you must visit a doctor without delay.

The implantation bleeding implies the starting of the pregnancy growth process which is very crucial news for every expectant mother. However, it is always suggested that don’t conclude anything by own even though you have immense knowledge or experience. Only a specialized health care provider can guide you correctly in this regard and will make your pregnancy experience most positive one.