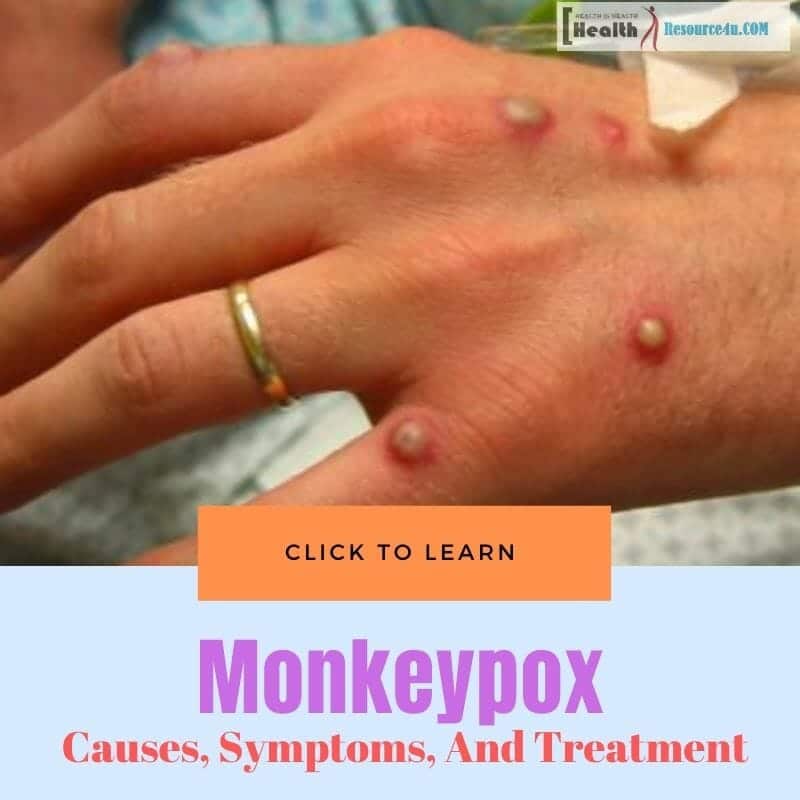 Monkeypox is a viral zoonosis caused by the monkeypox virus. It occurs with symptoms similar to those that occur in the past in the patient who develops smallpox. However, it is not as severe as smallpox.

Smallpox eradicated in 1980 and after that, its vaccine was also ceased subsequently. So after this severe disease, monkeypox emerged as the crucial orthopoxvirus. This viral disease mostly occurs in Central and West Africa, especially in the tropical rainforests.

The human case has been actively reported from the eleven African countries since 1970. A recent monkeypox case was identified in September 2018 in Israel and the United Kingdom and in May 2019 in Singapore that was carried by travelers coming from Nigeria.  A healthcare worker case was also identified who become infected with this viral disease.

Monkeypox is a rare illness that was first identified in the monkeys living in Africa in the year 1958. The infected persons develop small lesions or pox in the body that resembles smallpox signs and a physical finding to diagnose this disease. The virus that causes this infectious disease is very much similar to the smallpox virus known as variola virus.

Is monkeypox a contagious disease? 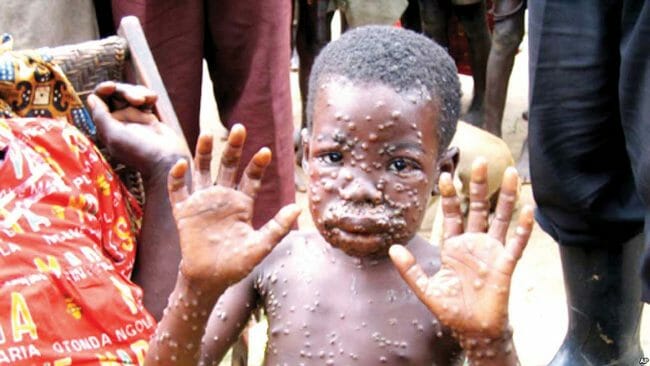 The monkeypox may be transmitted from infected animals to humans or person to person. However, the death rate caused by this infection is much less with a comparison to smallpox when it used to exist. Africa which is the highest victim of this infectious disease experience about 1 to 15% of fatality rate for monkeypox whereas the fatality cases in children are about 15 to 20%.

The areas which are occupied with huge rodent populations in Africa the monkeypox virus has been emerged as endemic. In this context, the cases of smallpox were totally different as it did not affect to endemic animal population instead of that it only caused infection in humans.

Though from time to time bloggers and press releases tried to create a relationship between monkeypox and other diseases including Yellow fever, Mad cow disease, Leprosy, Ebola, and other immunological and viral diseases however there is no scientific evidence to support this assumption.

The transmission of monkeypox usually happens through direct contact with an infected animal to humans. Potentially the consumption of improperly cooked meat derived from an infected rodent or monkey can make a person infected with this disease.

An orthopoxvirus genus virus called monkeypox causes monkeypox infection. These viruses come in oval brick shape having a lipoprotein layer with filaments or tubules that covers the viral DNA. The other members of this viral genus cause other viral diseases whose symptoms resemble monkeypox disease such as smallpox, rabbitpox, camelpox, cowpox, buffalopox, etc. Most of these species infect a particular species animals but from time to time it may infect some other mammals as well.

The incubation period of monkeypox disease which is the time period between the dates of infection contraction to the onset of its symptoms is generally from 6 to 13 days but it can also range from 5 to 21 days. The symptoms caused by this infectious disease are divided into two periods depending upon the symptoms type and their sustainability.

Monkeypox is more precisely defined as a self-limited disease whose symptoms may last for 2 to 4 weeks time. The severe symptoms of this viral disease are more common among children and depend upon the extent of virus exposure, individual health condition before the exposure of this virus, and the nature of complications a particular patient develops.

The risk factors for contracting monkeypox virus are through direct contact of an infected animal, through their bites or scratches especially African rodents or monkeys. Also, it is possible through other rodents such as prairie dogs, etc that comes in the contact of African animals infected with monkeypox virus.

People can reduce and prevent their risk of contracting this virus by avoiding the consumption of meats from such infected animals. As per one recent study report monkeypox virus can infect several mammals species in spite of the fact that the concerned species have never been associated with the virus in their normal environment setting.

People living with monkeypox virus-infected family member have often high risk to contract this viral disease due to close physical contact. However, this can be avoided by using necessary protection measure such as face masks, gloves, etc. while taking care or having close contact with the infected family members or patient

Complications associated with monkeypox viral infection include secondary infections, sepsis, loss of vision caused by infection of the cornea, encephalitis, and bronchopneumonia. The population living in or around the forested areas has indirect or low-level exposure to the infected animal's species that usually leads to subclinical or asymptomatic infection.

The fatality rate of this viral disease varies from 0 to 11% among the general population. Out of these the young children are the greater victim of fatality cases of monkeypox. People younger than forty or fifty years are considered more susceptible to develop this viral infection depending upon the particular country they belong to. This is because of the cessation of smallpox routine vaccines worldwide after the eradication of this disease.

However, the difficulty is that in the current time the first-generation smallpox vaccine which is the original one is no longer available for the general public usage purpose. Though a new vaccinia-based vaccine has been approved for the prevention of monkeypox and smallpox in the general public in the year 2019, but it is not widely available. The CDC recommends the following treatment measures to be applied for the treatment of monkeypox infected patient-

Some supportive measures such as mechanical ventilation are used for the treatment of patients who are developing serve symptoms of monkeypox. However, this necessity arises in rare conditions. Patients are recommended to consult with an infectious disease healthcare expert only once they start noticing the symptoms of monkeypox infection.

The monkeypox virus infection diagnosis is done through the physical examination of pox lesions and its association with rodents or other suspected animals. However, its diagnosis requires special precautions to be maintained.

It requires to inform the Centers for Disease Control and Prevention (CDC) personnel and Infectious disease consultants without delay as the occurrence of this infectious disease is associated with two additional issues.

Firstly in the U.S. and other countries that are not the usual outbreak regions for this infection, it is likely to indicate an outbreak situation. So if the health authorities will get timely information about its growth they will further work on identifying its sources so that its spreading risk can be prevented proactively.

The second issue with this infectious disease is not very likely to occur but it is extremely serious. The initial stage symptoms of monkeypox indicate biological warfare or terrorist attack with smallpox symptoms wrongly identified as monkeypox.

Mostly the laboratories are lacking with the reagents needed for the testing of this virus. For this reason, state labs and the CDC have to process the collected samples in order to get a definitive diagnosis report. The diagnosis tests are conducted on the basis of antigenic structures usually from the patient’s skin, pox samples, and in rare scenarios through the serum.

These are either specific to the monkeypox virus or immunoglobulin that also reacts to the virus. The tests that are mainly used in the diagnosis process include ELISA techniques, PCR or Polymerase Chain Assay, and Western blotting tests or immunoblotting.

What are the natural hosts of the monkeypox virus?

Several animal species have been found susceptible to carry monkeypox virus infection based on laboratory experiments, outbreaks in captive animals as well as in field investigations. Some animals that come in this list include Gambian pouched rats, dormice, tree squirrels, rope squirrels, primates, etc.

However further thorough study is required to determine the exact reservoir(s) of this monkeypox virus as confusion still exists regarding the history of this virus and how it survives in nature.

Creating awareness among the general public and educating people about measures that can reduce their exposure to the monkeypox virus is the key to prevent monkeypox infection. It will not only reduce its contraction risk but also its transmission from person to person or infected animals to humans.

The effectiveness of vaccinia vaccination for preventing and controlling the monkeypox infection is under scientific research to evaluate its appropriateness for this disease. People who come under the higher risk group such as laboratory workers and health workers for them this vaccine is very important.

For them, some countries are developing policies for mandatory use of the vaccinia vaccine to prevent their monkeypox infection exposure risk. Whereas some countries have already implemented this policy for the safety of this high-risk group of people. The below-mentioned measures can help all the counties worldwide in the prevention of this viral infection exposure among the mass population.

Most of the monkeypox infection cases are caused by the animal to human transmission. So measures should be taken to prevent this primary zoonotic transmission. For this, some essential precautions should be maintained while contacting wild animals that are susceptible to carry this virus.

Especially wild animals that are already sick or died, their meat, flesh, and other body parts must not be touched without using protection like hand gloves in any situation. While cooking animals meats or their other body parts alone or with some other foods, must be cooked thoroughly before their consumption.

Human to human transmission of monkeypox infection should be prevented in outbreak areas where the transmission rate or risk of this virus is very high. Speedier identification of any new cases and surveillance though critical to maintaining but it is necessary. Close contact especially unprotected contact with any monkeypox infected patient should be avoided both by the caretakers including family members and health workers as they have a greater risk of contraction.

Samples collected from the confirmed or suspected monkeypox virus-infected patients must be handled with utmost care only by the trained staff working in a well-equipped laboratory. If possible, someone who has already vaccinated with a smallpox vaccine should be assigned for the confirmed or suspected monkeypox virus-infected patient’s care.

The spread of the monkeypox virus is quite possible from an outbreak area to other countries through infected animal’s international trade. So restriction on trade is vital to prevent this risk. Some countries have already placed regulations on the importation of rodents and non-human primates especially from countries known for an outbreak.

Captive animals that potentially carry monkeypox virus should be isolated from other healthy animals in order to prevent this virus transmission risk among them for quarantine.  Any animals susceptible to come in the contact of a monkeypox infected animal should be quarantined and must be handled with standard precaution methods. Their symptoms must be observed for the next 30 days to conclude their health status.

With the above-mentioned precaution measures, it is quite possible to prevent the contraction and the spreading risk of monkeypox viral infection in its all possible sources. However, if someone suspects the growth of this infectious disease symptom they must consult with the healthcare specialist for infectious diseases without making further delay.