Health is wealth for each and every human being in this world, however, there is no guarantee of this wealth for life that when it will remain good and when it will fall in a very critical or life-threatening situation. So the prudent way to protect own self from unforeseen circumstances is to buy critical illness insurance before you actually fall into that situation.

A critical illness insurance policy reimbursed the amount expended towards the treatment of critical diseases mentioned in the terms of policy while taking or applying for such insurance. This way the insured person stay secure and can live a peaceful life without any tension of monetary concern as if he or she suddenly develop any mentioned critical diseases as these insurance companies are bound to pay the insured up to the assured amount.

While enlisting the critical illness or diseases these insurance companies often ignores to acne in their list considering it is not life-threatening or critical which is no way make a sense because if you will go deeply of the intensity of acne and its effects on the affected person you will get to know that how much dangerous it is and how frequently it brings mental trauma.

In many cases, acne causes to develop a mental depression which gradually affects to the social and physical behavior and in the future if it remains untreated can develop other severe health concerns. So next time when you will plan to take a critical illness insurance, make sure that you are checking all the content and coverage and say your policy agent to include Acne in the list of critical diseases. 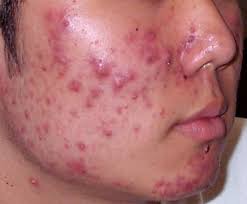 Our skin has small pores which remain connected with the oil glands existing inside the skin. Follicles are small sac that creates a connection between skin tiny pores and oil glands and oil secretion is done from the follicles. Pimples start growing and other acne issues develop when these tiny pores get clogged and oil builds inside the skin.

Acne is an inflammatory skin condition which causes pimples, blackheads, whiteheads, bumps, nodules, and cysts and often leaves rigid scars behind it. In the UK this is the most common skin disease which often develops stress, depression, anxiety if it gets severe etc.

In teenagers or young adults, acne is quite common to occur in their puberty stage which happens due to sudden hormonal changes in the body. However, acne can attack someone at any age other than the puberty stage. Below we have enlisted most common and possible causes of acne.

Changes in the hormonal level such as male hormones like testosterone in both male and females are the primary reason of acne. This change mainly happens during the puberty phase so who so ever will be in their puberty phase has to suffer from acne effects. Apart from puberty in some other stages of life too if there will be extreme changes in hormones due to any reason may cause acne at any age.

Mental stress plays a major role in producing hormone causing acne and its related effect on the skin resulting in pimples, breakout, blackhead and other skin inflammation develops. Whether you work in an office or you are a retired person or a housewife we all suffer from small to big forms of stress in our life.

If the stress you are suffering from is beyond your control level and if it is existing for a very long time then it will affect badly to your normal hormonal balance and this sudden change will come out in the form of acne and its associated skin issues.

Dirt and impurities existing on skin easily clog the pores on your skin which is the major reason of acne related problem like blackheads, bumps, pimples, breakout etc. Our face easily gets trapped with environmental pollution and dirt whenever we go out. So to avoid acne based on dirt and skin impurities it is essential to clean your face with good face wash and cleanser at least two times in a day.

Sometimes acne becomes a hereditary issue that you get from any of your parents who suffers from the severe acne. It is seen that some people get acne issue throughout their life which is a severe health concern as a result of that their children also suffer from same concern even after their puberty phase. However hereditary effects vary from person to person.

In some cases, acne is elevated by some special medications if the affected person is taking them during acne period. Also, these medications are as strong that they often develop bumps and pimples on the skin.

Medications which contain elements such as oral or injected steroids, bromides, iodides etc. carry a very high risk of causing acne or worsen the existing acne. Athletics and bodybuilders often take steroids for boosting their body and performance which aggravates acne.

It can also be said that drug-related acne is person specific. So some people get acne after consuming such acne elevating medications and some remains unaffected.

Acne is a skin related issue so those who often remain affected with this inflammatory disease should stay alert while choosing a cosmetic product for them as a selection of any wrong product will affect badly and aggravate acne related skin concerns like pimples, bumps, breakout, and black head.

Always choose cosmetic products as per your skin type and quality. Especially those who have sensitive skin are more likely to get affected by acne so they should always check thoroughly the ingredients of products that they are choosing for them.

Check the cosmetic features like if it is non-inflammatory, non-comedogenic, rich with natural and gentle ingredients and suitable for your skin type or not. If it contains water as a primary content then it is best for you as water-rich products are best for acne prone skins.

Due to Consumption of Some Foods

There are some foods which are estimated to develop acne. These foods are not scientifically proved as acne elevator but yes on the basis of real-time experiences by people it is seen that after eating some foods they start getting acne and its effect on their skin very fast. These people should always avoid the consumption of such foods.

Highly processed foods, fried foods, caffeine, chocolates, nuts, pizza are some foods which cause acne, especially in acne prone skin people. Also, cases are there in which people get acne with dairy products. Once you are sure that after consuming certain food you are getting sure shot acne problem then avoid it as a prudent acne preventive measure.

Apart from these, foods rich in iodine are also very sensible and more than its limited quantity consumption can easily develop acne problem. Iodine primarily exists in crab, lobster, shrimp, in green foods such as spinach, kelp etc.

Frequent skin cleansing or face cleansing for more than twice a day makes your skin dry and rough resulting in frequent breakout and pimples growth. This basically happens because when your skin gets dry due to intense and frequent cleansing then more oil produced in order to compensate for the lack of oil on the skin. This extra oil clogs the pores causing acne issue.

Also, facial cleanser containing toxic and harsh chemicals rubs your skin and makes it irritant and dry resulting in breakout in the skin. In order to avoid such problems, it is better to use a cleanser which has a creamy texture and is very gentle on your skin as because it will clean your skin smoothly and will also nourish it with its creamy content.

It is proved in surveys that the body sugar level or high insulin level in blood elevates the acne growth. High consumption of sugar-containing foods increases your insulin level which is responsible for the growth of male hormones and plays a major role in acne production.

By consuming foods which don’t elevate to the body’s insulin level will be helpful for avoiding acne based on high insulin level. Low glycemic foods like complex carbs including whole grain etc. which takes a very long time in digesting so don’t increase an effective amount of insulin hence there will be a very low risk of acne.

In order to start acne treatment appropriately, the doctor will diagnose the severity or intensity of it. For understanding it in a better way as per the severity, acne is divided into four stages mentioned below.

Acne which is in mild condition comes in the first stage or category. In this stage, the inflammation remains minimum and pimple at this point of time remain in small size also its color and appearance are less invasive and less painful. This is the initial phase of acne which causes to develop small pimples, whiteheads, and blackheads.

At stage two acne remains in moderate condition and its intensity will be greater than the stage 1acne, resulting in more breakouts, blackheads, whiteheads, and more pimples. Breakouts in this stage are more often with a comparison to the last stage.

In stage three the inflammation rate remains high and pimples at this point of time remain bigger in size and painful even with a little touch. Skin get tender and more quantity of pustules and papules develops in this phase which is a pimple infected with bacteria. Nodules also develop in some people which are thicker, deep-rooted pimples.

Stage 4 is the most critical phase of acne in which the condition remains worse and often it leaves permanent scarring and disfiguration if not treated properly. At this stage more severe and in numerous quantity, pus-filled cysts, nodules, pustule, and papules develop in the affected person that is very critical and painful. It can grow in any part of the body even in the chest and back.

As per the treatment of acne is concerned it totally depends on its severity and stage accordingly the treatment process will vary. There are different medications and therapies which relieves acne. The severity and range of your acne will impact the time of healing.

In the case of acne in pregnant woman oral medications are highly prevented. Apart from these, there are popular therapy processes which work directly on the affected area and ensure faster result than the other treatment processes. These therapies are often combined with the other medications for effective result.

Some common topical medications which are used to treat acne and prescribed by the doctors are Antibiotics, Dapsone, Salicylic acid and azelaic acid, retinoids, and drugs like retinoids. Again some popular and effective oral medications include Isotretinoin, Anti-androgen agents, Antibiotics and Combined oral contraceptives.

Therapies are only limited and prescribed on special cases of acne. High-grade light or laser tools are used to remove scars, blackheads, and whiteheads. These therapies include chemical peel, steroid injection, laser therapy, photodynamic therapy, extraction of whiteheads and blackheads.

Apart from above mentioned medical treatment acne can also be relieved and prevented by applying healthy lifestyle and home remedies. By making some necessary changes in your everyday lifestyle you can rid of this skin inflammation issue completely, also you can prevent it from spreading or getting severe.

Some effective home remedies for treating acne include proper washing of skin with gentle and skin friendly cleansers, avoiding skin irritation causing elements, sun protection (to avoid UV rays damages), usage of over the counter acne products which helps to prevent excess oil secretion and can promote the peeling etc.

Acne itself is not a critical disease so no insurance policy company will pay for its treatment but yes if acne is associated with some underlying critical health condition that comes under the coverage of critical illness insurance then definitely you will get whole treatment expenses reimbursed by these insurance companies.