In the year 2009, a virus called H1N1 Flu Virus was spreading fast in the different areas of the world causing severe illness and health impacts. It is also known as Swine Flu and the reason behind this is that in the past time people who caught by this virus usually have had contacts with pigs in some or other ways.

However, this concept changed many years ago along with the emergence of a new virus that caught and spreads in people who don’t have any kind of contact with pigs in any form. In the year 2009, the World Health Organization declared this influenza infection a pandemic because of its massive spread rate around the world.

This is a respiratory infection that spreads via coughs and sneeze of an infected person to a healthy person who is near him or her. This human respiratory infection or swine flu still circulates as a seasonal flu virus in different areas of the world every year but not in large numbers as it used to be in its initial year of the attack.

Though it can cause severe impacts on the patient’s health but it is preventable by the vaccine and flu shots that can fight with this virus strain. You can protect your family health from this seasonal virus infection risk by taking these vaccines proactively every year.

The symptoms of swine flu are very much similar to the signs that occur due to an infection caused by some other flu strains including fever (but not in every case), chills and cough. People should visit their nearest healthcare center for the necessary diagnostic tests once they start noticing these signs or symptoms especially in the seasons which are more prone to cause this virus attack on the human body.

What is swine flu? 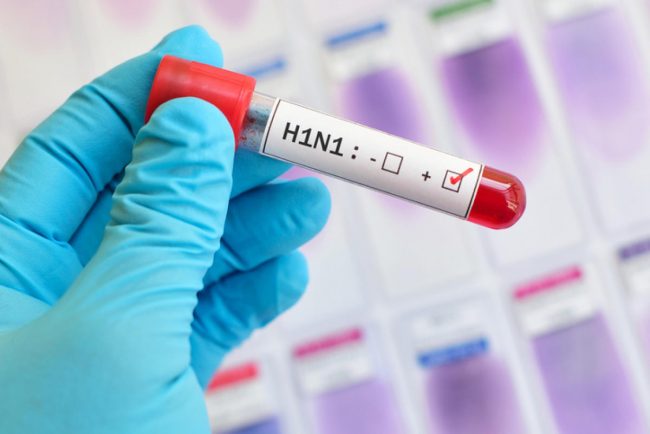 Swine flu is a respiratory infection that occurs due to the strain of the H1N1 virus which is a relatively new influenza virus. It develops symptoms similar to regular seasonal flu. First, the virus originated in pigs but it primarily transmitted from humans to humans not from animals to humans.

During the years 2009 and 2010, it was first identified in humans and since then it occurs every year like other common seasonal flu. World Health Organization declared this virus infection a pandemic in 2009 as it is a highly contagious disease and was spreading rapidly in people around the world or in different continents at the same point in time.

Every year the flu shots developed by the Centers for Disease Control and Prevention (CDC) which includes vaccines to fight against the H1N1 virus. Because of its high contagious nature, it can easily and quickly spread from one person to another. One single sneeze of an affected person contains thousands of germs that can instantly spread through air affecting every other person that comes in its contact.

This virus can easily linger on surfaces like tables, doorknobs and wait for getting picked by the human body. The best way to protect yourself and your dear ones from the swine flu virus attack and its associated health hazards is its prevention. Use a hand sanitizer frequently to stop the spreading of this seasonal virus. Maintain distance from the swine flu infected person as its person to person spreading rate is very high and quick.

How Does the Swine Flu Infection Spread?

The swine flu infection spreads in the same way as any seasonal flu does. When the H1N1 Flu Virus-infected person coughs or sneezes the tiny droplets of virus sprayed in the air. Hence when you or any other healthy person comes in the contact of these droplets or touches a surface such as a sink, doorknob where these drops are lingering or touches any belonging or used thing by an infected person you can easily catch this flu.

This flu is highly contagious that means people who have developed this infection can spread it as fast as even before developing a single symptom of this infection. They can spread it as long as after seven days of getting sick. In comparison to adults, kids are more contagious for as long as ten days. In spite of such name of this flu, you can’t contract swine flu by easting any pork item such as bacon, ham, etc.

Swine flu occurs due to a strain of an influenza virus which is usually known for infecting pigs. The transmission of this virus usually occurs from humans to human not from animals to humans.  Despite its name, you cannot get this virus by eating a well-cooked pork food item.

Swine flu is highly contagious and it spread through the saliva and mucus particles of an infected person to a non-infected person. Following activities causes this flu to spread in others-

The symptoms of swine flu are very much similar to other seasonal flu symptoms. It can include-

Just like other seasonal flu, even the swine flu has the potential to cause more serious health issues such as lung infection, pneumonia, and other breathing troubles. It can also make some existing health problems worst such as asthma and diabetes. You should immediately contact your doctor if you notice the symptoms like breathing shortness, pain in belly or sides, severe vomiting, confusion or dizziness without making delay.

In the initial days of swine flu growth, it was more common in children aging 5 years and above and young adults. It was quite unusual phenomena as most of the flu virus infections attack or complication risk lies in older adults group of people as well as in very young.

At present, the risk factor of developing swine flu is similar to any other strain of the flu virus. People who spend most of their time in an area where a large number of people are infected with this flu disease have a greater risk of developing this infection. People who contain the risk of complications if they develop swine flu infection are enlisted below-

In order to diagnose any flu even swine flu, the doctor first conducts your physical examination and asks for all the signs and symptoms that you are experiencing in the recent past. They ask for a test to conduct in order to determine the influenza virus.

There are many tests that help in the diagnosis of this flu virus. However, everyone who has contracted this virus need not requires going through these tests. In most of the cases, the treatment plan of the healthcare specialist remains the same, even after knowing that the patient has the flu. The diagnosis test is more important to conduct under the following circumstances-

The diagnosis test is only important to be done if your doctor wants to conclude whether your symptoms are caused by the flu virus or some other underlying health problems are causing these symptoms growth. Other health problems that can cause the symptoms similar to the swine flu include-

The test which is mostly used for the diagnosis of swine flu is known as Rapid Influenza diagnostic test. Under this test, the detection for antigens is done on the patient’s swab sample taken from the nose or back of his or her throat. The result of this test may come just within 15 minutes time. However, the result of this test may vary and the possibility of the inaccurate results remains in this test.

The doctor may diagnose you with influenza-even your test reports show negative, based on your symptoms and start the treatment accordingly. There are some special more sensitive flu tests but they are limited to some specialized labs and hospitals only.

People diagnosed with flu virus including the swine flu only require getting relief from their current symptoms. So all treatment measures focus around relieving the symptoms of the patient. People who have any chronic respiratory disease, their doctor usually prescribe them some additional medications in order to cope up with their all symptoms and discomforts.

However, flu viruses can develop resistance to these medications. So to reduce the chances of resistance development risk and to increase the effectiveness and availability of these drugs, doctors reserve these antivirals for patients who have a high risk of complications or who live with someone having the risk of complications.

Apart from the medical treatment, you can relieve your symptoms caused by any type of flu by following the below-mentioned home remedies and lifestyle changes.

Apart from these home remedies take care of some important points to prevent your risk of complications. For example, aspirin medication is approved for the usage in children aging 3 and above but it should not be given to children or teenagers who are recovering from flu-like symptoms or chickenpox. This caution is important otherwise the risk of Reye's syndrome a fatal disease exists in this case.

Also, keep in mind that pain relievers give temporary relief from pain but they contain side effects risk. Moreover, these medications cannot cure your symptoms permanently. Some pain relievers may cause bleeding, ulcers and stomach pain as its side effect.  Also if taken for a very long duration and exceeding the recommended doses then acetaminophen may prove toxic for your liver health causing damages thereon.

Though swine flu in current time is not as scary as it used to be in its initial years of growth but it is important to give the right protection to you to prevent its growth risk in seasons that are popular for flu diseases. Some effective swine flu prevention measures include-

Follow all public health recommendations from the CDC, WHO, and other governmental public health institutions regarding the school or other official places closure, avoid crowds, etc during the flu season. With these prevention measures, you can easily prevent yours and your family risk of contracting H1N1 Flu Virus and its associated health hazards.