White hair patches which are also known as poliosis is a kind of hair disorder which really looks very unpleasant and spot on your beauty. So it is very crucial that you take the help of white hair patches treatment in order to relieve this condition and to get back your lost self-esteem and beauty.

This hair disorder can happen to anyone including male and female at any age or stage of life. The white hair patch is a localized patch of white hair at front of your hairline.

This primarily develops due to loss of melanin pigment by the affected hair follicles which causes strands discoloration and in the long run, it takes the form of patches at certain areas of your hair.

This de-pigmentation can happen due to any underlying reason and depending upon that specific cause the poliosis can exist for short to long term. The white hair patches usually develop in the head still it can occur in any other parts of the body too.

Just like your skin, hairs are also an essential parameter of beauty and no doubt no one want to have such an undesirable happening with them.

Still, we cannot have control over it in spite of our unwillingness. So if you are the one who is concerned about your white hair patches and want to know in detail why this happened and what are the treatment options available for you then go through the below details.

Here you will get every solution to your query and now you need not worry about this hair disorder anymore as this cannot last lifelong if you take right steps at the right time.

White hair patches or poliosis is divided into two types such as: 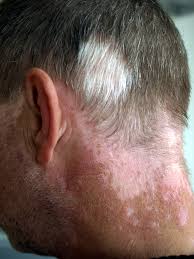 This hair disorder can occur at any point in time of age and it can happen to anyone including males and females. Depending upon its underlying reason the poliosis can be for short or long term.

The patches of white hair grow in your regular hair. In general, it develops in the streak or forelock, in front of the hairline. However, the chances of its growth at any other body parts are also there. There are several reasons or causes behind poliosis or white hair patches which are enlisted below:

If any of the parents have some genetic issue during the pregnancy time then chances of its transmission to the newborn baby remain quite high. In such cases, a baby can develop white hair patches issue from the time of his or her birth.

The consumption of certain drugs on a regular basis can also cause this hair disorder as its side effects. Apart from this aging, injuries, dermatitis, leprosy, hypo or hyperpigmentation of eyes, halo moles, melanoma, alopecia areata, herpes zoster (shingles), radiotherapy, melanisationdefets, albino and Rubinstein –Taybi syndrome are certain health conditions which can cause the white hair patches concern.

The diagnosis of white hair patches or poliosis is not so easy. It requires deep-diving into the patient’s medical history and other expected possibilities that can cause this hair disorder concern.

The doctor will first ask about your family history to detect whether you have inherited this issue from your parent’s or not. They will ask about your detailed medical history to connect the link between other health disorders with this hair disorder concern.

The doctor will recommend certain diagnostic tests and examinations to reach the root cause of this problem. As poliosis is associated with several medical conditions so only the thorough medical checkup can help in the diagnosis of the existence and causes of this hair disorder so that its appropriate treatment procedure can be started. Following diagnosis tests are conducted to detect poliosis and its causes:

The appropriate treatment method for poliosis specially the congenital one is still in its processing phase. However, poliosis which grows in the later stages of life can be prevented by taking some preventive steps such as:

Apart from all these prevention and treatment methods, you can do some tricky work which will help you in hiding your white hair patches and protect you from getting embarrassed in front of others.

You can apply a hairstyle that can hide your patches area in the head, cover your hair with scarf or cap, wear a headband, color those white patches with dye, adopt salt and pepper look to enhance your appearance out of your drawback.

8 Common Myths About Hair and Truth Behind Them

People generally have many misconceptions or myths regarding hair which are not actually true and this misunderstanding can cause many to fall into some unusual conditions which can they easily avoid. So below we have enlisted some most common myths about hair and the truth behind them.

Truth: People have a very common belief regarding the gray hair that plucking any of them causes more amount of gray hair growth in its place which is absolutely false.

Plucking a hair no way causes any more to grow of the same pattern. However, if you do so it can cause scarring in the affected place that will lead to hair thinning that results in hair loss.

So it’s better that you avoid plucking your gray hair instead choose other treatment for such type of hair.

Myth #2: Hair trimming on a frequent basis boosts its growth

In reality, the growth of your hair depends on the quality of follicles in your scalp. Yes, the trimming can help you to make your hair look much thicker and longer because it relieves from the split ends and breakage issue which usually make your hair look thinner and sparse.

Hair experts suggest hair trimming in an interval of eight weeks to those who want to grow their hair because it will keep your hair in shape with a beautiful appearance.

Myth #3: Stress is the primary reason responsible for gray hair

Truth: People have a general myth that stress is the primary factor responsible for the initiation and growth of more gray hair which is not true. The graying of hair starts due to melanocytes which cause a reduction in the production of melanin responsible for pigmentation or hair colors.

Yes, stress can speed up the hair graying process but it is not solely responsible for the beginning of gray hair process. The gray hair depends on your genetics and accordingly, the gray hair growth starts at a certain age.

Myth #4: Conditioner should be avoided in the case of greasy hair

Truth: People have a myth that conditioner should be avoided in the cases of greasy hair which is not true. Conditioning your hair no way affects your hair health instead it makes your hair soft and silky.

Greasy hair is caused by too much sebum production in the scalp by tissues. So if anyone has greasy hair problem it is suggested to use clarifying or deep cleansing shampoo for cleaning hair and only at the hair ends the conditioner should be applied.

Myth #5: Sleeping by keeping the hair down can boost its growth

Truth: People have a very common belief that sleeping with hair down can speeds up its growth which is just a myth and far from reality.

Sleeping by keeping your hair down can help in reducing hair thinning and hair loss as it will reduce further hair damage, hair loss, and burden in roots.

However, if you want to grow your hair faster sleep with a loose ponytail instead of a tight one which can be beneficial for your hair.

Myth #6: The eyebrows and hair color should always remain the same.

Truth: People have a general belief that their eyebrows and hair color should always match or should be same which is a half-truth. It can be said that eyebrows color are based on trends like the current trend is of black eyebrows.

However, in no condition, the eyebrows color should be more than two shades darker than your existing color.

Myth #7: Brushing hair too many times in a day improves its health

Truth: It is a very common belief regarding hair that brushing too many times to it can boost its health which is not true. As per the hair, expert’s people should brush their hair for the time as much as it is actually needed.

Excessive brushing like 100 times in a day makes your hair roots fragile and hair loss issue can increase especially if you are going through the hair thinning or hair loss problem.

Yes, brushing for the adequate amount of time can help in spreading its oils throughout the hair. However, you should make sure that you use a wide teeth comb with soft bristle and be very gentle while brushing it.

Myth #8: Using sunlight is the best way to lighten your hair

Truth: Some people sit under sunlight in order to lighten their hair color which is absolutely a wrong procedure. Though this can lighten your hair color still it is no way healthy so must be avoided for the sake of your good hair health.

Sunlight can burn your scalp just like it does to your skin. So in order to lighten the hair color one should use ammonia-free lifting cream or color which is very safe and healthy for lightning the hair color.

We hope the above-mentioned facts have burst your long term perception or, myths about hair health. Regarding the white hair patches treatment, you should definitely go for the aforesaid diagnosis and prevention measures to protect your original hair color and health.