Nasal polyps are one of the chronic inflammatory diseases which develop in the form of tender, painless and benign growths on the nasal passages or sinuses linings. It looks like hanging grapes or teardrops. The larger sizes of these noncancerous growths develop excessive discomfort which requires immediate medical attention.

Small nasal polyps usually don’t develop any symptoms but the larger growths which include a group of nasal polyps can easily block the nasal passages leading to difficulty in breathing, loss of smelling sensation and recurrent infection issue. This health issue develops as a result of chronic inflammation in the body and associated with health issues like allergies, asthma, frequent infections, immune disorders and sensitivity to certain drugs and cystic fibrosis in children.

Anyone can get a victim of this health issue but it is more common in adult people and data shows that males are 2 to 4 times greater victim of this concern than females. It can be shrink or eliminated with regular medication intake prescribed by the healthcare specialists. However, in certain cases, surgery is the only option to remove the nasal polyps and relieve a patient from all its associated discomforts.

Still, even after its treatment, there are cases where nasal polyps often recur which requires further treatment. If you are suffering from frequent nasal congestion problem that doesn’t relieve even after the consumption of over the counter mediation and allergic medications then it may be nasal polyp that is affecting your nasal passage leading to difficulty in breathing and other discomforts.

The nasal polyps vary in size and color. They look pink or yellowish-brown and shaped like grapes on a stem or teardrops. One can develop polyps in both the nostrils or just in one nostril. They can grow alone or in clusters. The larger size polyps cause difficulties in breathing to the affected person and increases the risk of recurrent infections. However, with treatment, one can get rid of this issue and lead a healthy lifestyle. 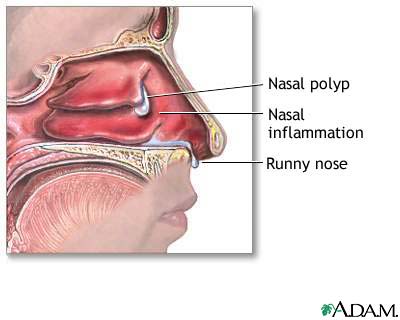 The exact reason or causes of nasal polyps issues are not known but in most of the cases, this health issue is associated with non-allergic asthma, whereas in certain cases no allergic or respiratory trigger noticed or found responsible for this benign growth in nostrils.

The nasal polyps develop in inflamed tissues of nasal mucosa which is a highly wet layer that offers protection to inner areas of nose and sinuses. Also, it humidifies the air that you breathe.

When a person gets affected with an infection or develops allergy-induced irritation this nasal mucosa gets red and swollen and may even produce fluid which drips out.

Under the condition of persistent irritation for a longer duration, the mucosa may produce a polyp that is around growth looks like a small cyst that can block your nasal passages.

Nasal polyps are no way connected to uterine or colonic polyps which exist in the uterus or digestive system respectively. Polyps are not diseases they are just a result of swelling or inflammation in your nose or sinuses.

This inflammation leads to an accumulation of fluid in the space between mucous forming cells or interstitial space of nose and sinuses. By the time when these heavy cells pulled down by the gravity force, it turns in to polyps.

Some possible triggers to this nasal condition as per the scientists include allergy, an immune response to fungus, viral or bacterial infection, etc.

Though usually nasal polyps grow near the openings of sinuses but it can also develop anywhere in the nasal passages or sinuses. Nasal polyps can occur to anyone even to those who have no previous history of nasal problems. However, there are some significant triggers to this health condition which includes-

Apart from this in certain cases, nasal polyps grow as a result of hereditary tendency. In such cases, the concerned person’s genes contain the tendency to react to inflammation by their mucosa in different ways resulting in polyps occurs in nostrils.

Nasal polyps are noncancerous growths in the nasal passages which are soft and painless. It develops in the area where your upper sinuses drain into the nose.

Because the growth of the nasal polyps lacks the nerve sensation so the possibility lies that the affected person might not even aware of its existence. People with smaller size polyps may not develop any symptoms however irrespective of its size and shape it generates following signs and symptoms in general-

occurs only in severe cases or in serious conditions in which the affected person stops breathing during their sleep.

Any health condition that causes persistent irritation and swelling or inflammation issue in your nasal passages or sinuses contains the risk of developing nasal polyps. Some common infections or allergies associated with this health issue include-

The diagnostic tests help to clarify the existence of nasal polyp’s growth. Often the nasal polyps are identified through your physical verification with the help of an instrument having a light on its end. Apart from this, the following test may be required for the diagnosis of the nasal polyp health issue.

In this particular diagnostic test, a narrow tube-like instrument with a small camera or magnifying glass is inserted into the patient’s nose for viewing the clear picture of polyp growth.

This test is recommended for the younger age children to diagnose the nasal polyp’s existence.

This is a kind of allergy test that is recommended by the doctors under the condition where they think that an allergy is causing your nasal polyps to grow and develop.

CT scan diagnosing test helps in localizing the nasal polyps and also other abnormalities that are associated with this chronic inflammation. This test will also help in recognizing any other obstructions if it is there and contributing to the patient’s symptoms.

Certain medications are prescribed by the doctors in order to reduce inflammation along with reducing the size of the polyp. Also, it helps in relieving congesting and other discomforting symptoms in the body.

In order to reduce runny nose issues and the discomforting sensation caused by a blockage in nostrils spraying nasal steroids are prescribed to the patients. This helps in shrinking the size of polyps however this treatment contains the risk of recurrent symptoms once you stop using it. Some common nasal steroids include the following:

Oral or injectable steroids such as Prednisone are recommended to the patients for whom the nasal sprays don’t bring any effective result or relaxation from the symptoms. However, these medications are only for short term relaxation because their longer use contains the risk of major side effects such as fluid retention, elevated pressure in the eyes area and rise in blood pressure level.

An inflammation (in nose area) induced nasal polyps can also be treated with antibiotics or antihistamines. These medications relieve quickly the symptoms of allergies or sinus infections.

The cases where prescribed medication fails in relieving or reducing the symptoms of nasal polyps and symptoms are persistent and in rising mode, surgery is the option that is recommended by the health care specialists for these special cases. The surgery procedure will remove the nasal polyps completely so that its associated symptoms will not recur or exists anymore.

However, the surgery type will vary from person to person depending on the size of polyps that an individual has developed. For the treatment or surgery of smaller polyps polypectomy is a kind of outpatient surgery is conducted through a small suction device or microdebrider. This device cuts and removes the softer tissues including mucosa.

This camera light helps in locating the polyps and other obstructions that are causing congestion into your nostrils and remove them through tools.

Also, the doctor may enlarge the openings to your sinus cavities if required during the procedure. This kind of surgery is mostly an outpatient treatment procedure.

Once the surgery is completed successfully, the saline washes and nasal sprays usage helps in preventing the recurrence risks of polyps. The anti-allergy medications, saline washes, and nasal sprays applications help in reducing inflammation and prevents polyp’s growth in general. After surgery, the patient requires to follow the recommended guidelines by the doctors to ensure that this health issue will not recur in the future.

Don’t Delay in the Treatment of Allergies or Asthma

Don’t make a delay in the treatment of any allergies or asthma diseases as in the long run these conditions increase your risk for developing nasal polyps. If the prescribed medications are unable to relieve your symptoms then consult with your doctor and ask for changing the medications to ensure an effective treatment.

Clean your Nasal Passages with a Nasal Rinse

Whether you have developed an allergy or not it is very crucial that from time to time you cleanse your nasal passages with a nasal wash or saltwater spray. This will help in clearing allergens and irritants and will improve the mucus flow.

Purchase an over the counter nasal wash kit with devices such as squeeze bottle or neti pot for rinsing your nasal passages.

Use only distilled water or sterile water. Boil this water and let it cool for one minute and then filter it before using it in your nasal spray bottle. Clean all the irrigation devices with distilled, sterile and boiled water and leave it in open condition.

It is very crucial that you avoid the contact of nasal allergens or irritants in your day to day life. For this make sure that you wear a mask while going to a pollution rich area, avoid the contact of chemical fumes, tobacco smoke, dust, and fine debris. These airborne substances can easily cause swelling and irritation in your nose and sinuses leading to nasal polyp’s growth.

Humidify your home with the help of a humidifier which helps in moisten your nasal passages and improves the flow of mucus. This will help in reducing congestion if it is already there and prevents blockages and inflammation. Clean your humidifier every day to avoid bacteria breed in it.

Most of the irritants or allergens enter into our nasal passages through unclean or unhygienic hands or fingers. So make sure that you wash your hands every time with a good hand-wash and use sanitizer. This good habit will help in preventing inflammation in nasal passages and sinuses caused by viral and bacterial infections.

So, now as you have a clear idea about Nasal Polyps health issues so it is crucial that you follow our above-mentioned preventive steps in your regular life so that you won’t have to suffer from all the traumas caused by this chronic inflammatory disease.